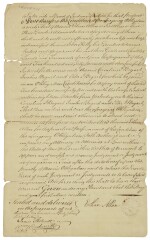 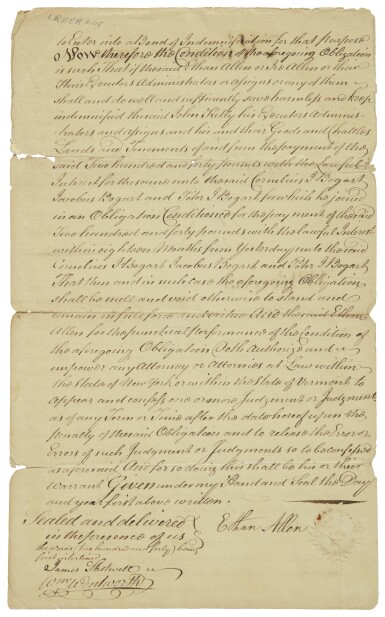 DOCUMENT SIGNED ("ETHAN ALLEN"), BOND GIVEN BY ALLEN AS SECURITY FOR PAYMENT FOR LAND PURCHASED IN NORTHERN VERMONT

This bond was given by Allen as security for payment of land he purchased in the "townships of Colchester and Essex" of Northern Vermont. "Wheras the above bounded Ethan Allen did yesterday purchase from Cornelius J. Bogart Jacobus Bogart Junior and Peter Bogart all of the City of New York Twelve rights of land...for the consideration of the two hundred and forty pounds of lawful money of New York..."

It was likely executed in New York City where Allen was at the time, and was to be executed in partnership with John Kelly, a New York attorney. There is also mention of his brother and revolutionary associate Ira Allen. An energetic land speculator, Allen later moved to Burlington, near the location of the land mentioned in this document.