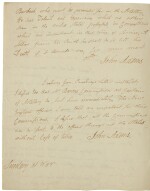 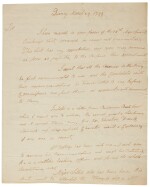 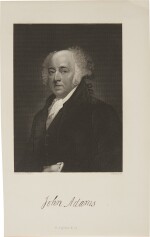 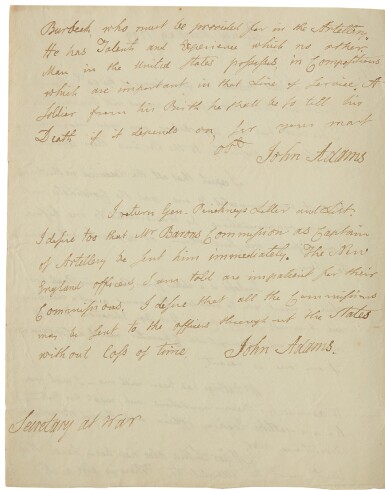 AUTOGRAPH LETTER SIGNED TWICE AS PRESIDENT ("JOHN ADAMS"), TO JAMES MCHENRY ("SECRETARY AT WAR"), REGARDING THE APPOINTMENT OF ARMY OFFICERS

Strengthening the Army for the Quasi-War with France—and for Fries's Rebellion, the Pennsylvania revolt precipitated by the tax burden of the Quasi-War. In a letter of 16 March, James McHenry had solicited the President's approval for series of military appointments sought by Major General Charles Cotesworth Pinckney in order to address Fries's Rebellion. McHenry assured Adams that "All necessary arrangements have been made and are making to subdue the insurrection. I have issued orders to draw five companies of the regular army to the scene of insurrection and for the volunteer companies to be in readiness to march at the shortest notice. I employ the former to produce an impression favourable to the volunteer force, which is alone intended to give due efficacy to the laws, and to render it less necessary to call out a great number of the latter." Adams here approves the requested commissions and suggests several others.

"I have received, in your favour of the 16th, Major General Pinckneys List, arranged in concert with Governor [William] Davie [of North Carolina]. This List has my Approbation and you may announce as soon as possible, to the Persons their Appointments.

"I expect that all the vacancies in the Army be first communicated to me and the Candidates with their recommendations be transmitted to me, before Commissions are sent them or appointments announced to them.

"Inclosed is a Letter from Benjamin Beale Junr which I request you to consider. He cannot accept a Lieutenancy and I cannot blame him. His Age, Education, Travels, Manners and irreproachable Character, merit a Captaincy if any one is vacant.

"Mr Hastings has been with me—I wish you to examine his Recommendations and weigh his Pretentions. He is a warlike looking officer and served the whole Revolutionary War.

"Major Lillie also has been here. His Merits must be attended to. There is also a Mr Burbeck, who must be provided for in the Artillery. He has Talents and Experience which no other Man in the United States possesses, in Compositions which are important in that Line of service. A soldier from his Birth he shall be so till his Death if it descends on, sir your most ob[edien]t John Adams."

In an autograph postscript signed, Adams reiterates the necessity of quick action: "I return Gen. Pinckneys Letter and List. I desire too that Mr Barons Commission as Captain of Artillery be sent him immediately. The New England officers, I am told are impatient for their Commissions. I desire that all the Commissions may be sent to the officers throughout the states without loss of time." Adams was evidently concerned not only by the tax rebellion by the Pennsylvania Dutch, but also by a still-anticipated invasion by France. While this very efficient letter betrays no animosity towards his Secretary of War, little more than a year later Adams asked McHenry for his resignation, denouncing him as a tool of Alexander Hamilton, one of Adams's greatest political rivals.