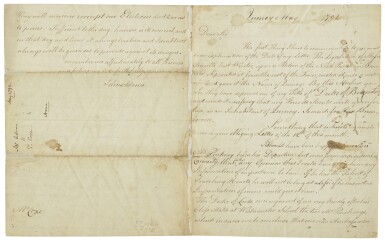 MANUSCRIPT LETTER SIGNED AS VICE PRESIDENT ("JOHN ADAMS") TO TENCH COXE, DISCUSSING DIPLOMATIC INTRIGUE, THE IMPORTANCE OF INDUSTRIALISM TO THE NEW NATION, AND HIS SKEPTICISM OF IMMIGRATION

"Manufactures must have good Government. They cannot exist where they are, without it: much less can they be introduced where they are not. But a great part of the People of America appear to be so determined to have no Government at all, that if you let them know the whole Truth you will excite an unmanageable Party against Manufactures."

Adams opens this fine discursive letter with a humorous reference to his new address: "The first Thing I have to communicate to you, must be an Explanation of the Date of my Letter. The Legislature of Massachusetts, last Winter, upon a Petition of the North Parish in Braintree, Seperated it from the rest of the Town, erected it into a new one and gave it the Name of Quincy. By this Measure you See they have deprived me of my Title of 'Duke of Braintree,' and made it necessary that my Friends should write me in future, as an Inhabitant of Quincy. So much for this Brimborion."

The Vice President then turns his attention to Thomas Pinckney, his replacement as United States Minister to the United Kingdom, who had just returned to London from Philadelphia. "I Should have been happy to have seen Mr. Pinkney before his Departure: but more from individual Curiosity, than from any Opinion that I could have given him any Information of importance to him. If he has the Talent of Searching Hearts, he will not be long at a loss: if he has not no Information of mine could give it him. The Duke of Leeds, once enquired of me very kindly after his Class Mates at Westminster School the two Mr. Pinkneys, which induces me to conclude that our new Ambassador has many powerful Old Friends in England. Whether this is a Recommendation of him for the Office or not, I have other reasons to believe that his Family have had their Eyes fixed upon the Embassy to St. James’s for many Years, even before I was sent there, and that they contributed to limit the duration of my Commission to 3 Years in order to make way for themselves to succeed me. I wish they may find as much honour and pleasure in it as they expected. And that the Publick may derive from it Dignity and Utility. But knowing as I do the long Intrigue and suspecting as I do much British Influence in the Appointment, were I in any Executive Department I should take the Liberty to keep a vigilant Eye upon them."

Tench Coxe was a leading proponent of industrialization during the early years of the United States, and contributed to Alexander Hamilton's celebrated Report on the Subject of Manufactures, which was presented to Congress on 5 December 1791. Coxe also headed the Manufacturing Society of Philadelphia, so he should have been receptive to Adams's next disquisition:

"There is one secret which you must be careful to keep. Manufactures must have good Government. They cannot exist where they are, without it: much less can they be introduced where they are not. But a great part of the People of America appear to be so determined to have no Government at all, that if you let them know the whole Truth you will excite an unmanageable Party against Manufactures. Manufactures cannot live much less Thrive without honour, fidelity, Punctuality, public and private faith, a Sacred respect, to property and the moral Obligation of Promisses and Contracts;—Virtues and habits which never did and never will generally prevail in any populous Nation, without a decissive as well as an intelligent and honest Government. The Science of political Œconomy is but a late Study and is not yet generally understood among us. Tho I have read most of the Authors of Reputation on the subject, both among the French and English, I pretend not to have digested any Thing relative to it, with the Precission of a Master. But to me it appears, that the general Interests of Agriculture in particular as well as of the Nation in general will be promoted by a discreet and judicious Encouragement of Manufactures: and that it is only the Land Jobber, who can be benefited in the rapid rise of his Monopoly, by drawing every Labouring hand into the Wilderness to fell Trees."

In his letter to Adams of 12 May, Coxe acknowledged that "hosts of foreigners" buying land in Pennsylvania "increase my anxiety to strengthen & finally to settle our National Government." Adams closes this letter with a concurrence to Coxe's observation: "The continued Accessions of Foreigners, will endanger and destroy our peace, if We know not how to govern them. They will moreover corrupt our Elections and tear us to pieces. Sufficient to the day, however, is its own evil, and in that day and hour it always has been and I doubt not always will be given us, to provide against its dangers."

Alba B. Johnson (Parke-Bernet, 3 November 1943, lot 239, then part of an album of presidential letters from George Washington through Franklin D. Roosevelt)