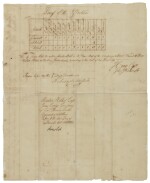 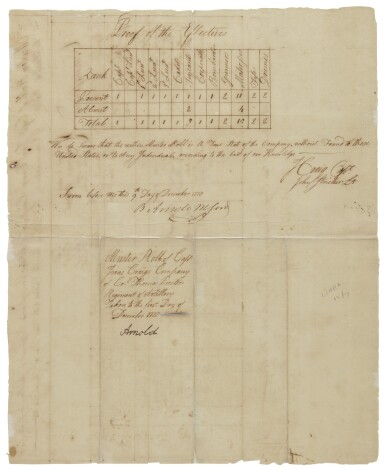 MANUSCRIPT DOCUMENT SIGNED ("B. ARNOLD") AS MAJOR GENERAL, BEING A MUSTER ROLL OF CAPT. ISAAC CRAIG'S COMPANY OF THE FIRST PENNSYLVANIA REGIMENT OF ARTILLERY IN THE SERVICE OF THE UNITED STATES, COMMANDED BY THOMAS PROCTOR

A scarce artillery muster roll, signed by the infamous traitor during his command in Philadelphia

George Washington appointed Benedict Arnold to take military command of Philadelphia after the British retreat in June 1778. During his controversial tenure in the city, Arnold exerted undue influence on the business affairs of the city (often for personal gain). He lived and entertained extravagantly, and his haughty, dismissive behavior excited the enmity and wrath of the Executive Council of Pennsylvania, leading to charges of abuse of power and, by December 1779, a court martial. It was during this time that Arnold began his close association with the Shippens and other Loyalists, laying the groundwork for his treasonous actions that would quickly follow.

Capt. Isaac Craig was appointed Company Commander in March 1777, and oversaw the unit in the battles of Brandywine and Germantown before spending the winter of 1777-78 at Valley Forge. The present muster roll finds the company with these sufferings behind them. Executed just months before Arnold's troubles began in earnest, this document lists four officers and 27 men of this unit of the Fourth Continental Army. Arnold has signed to approve the "Proof of the Effectives" table, which has been certified as correct by company officers Craig and Stricker. Col. Lewis Nicola, he of the poorly received suggestion that George Washington become King, has signed on the front as the mustering officer.