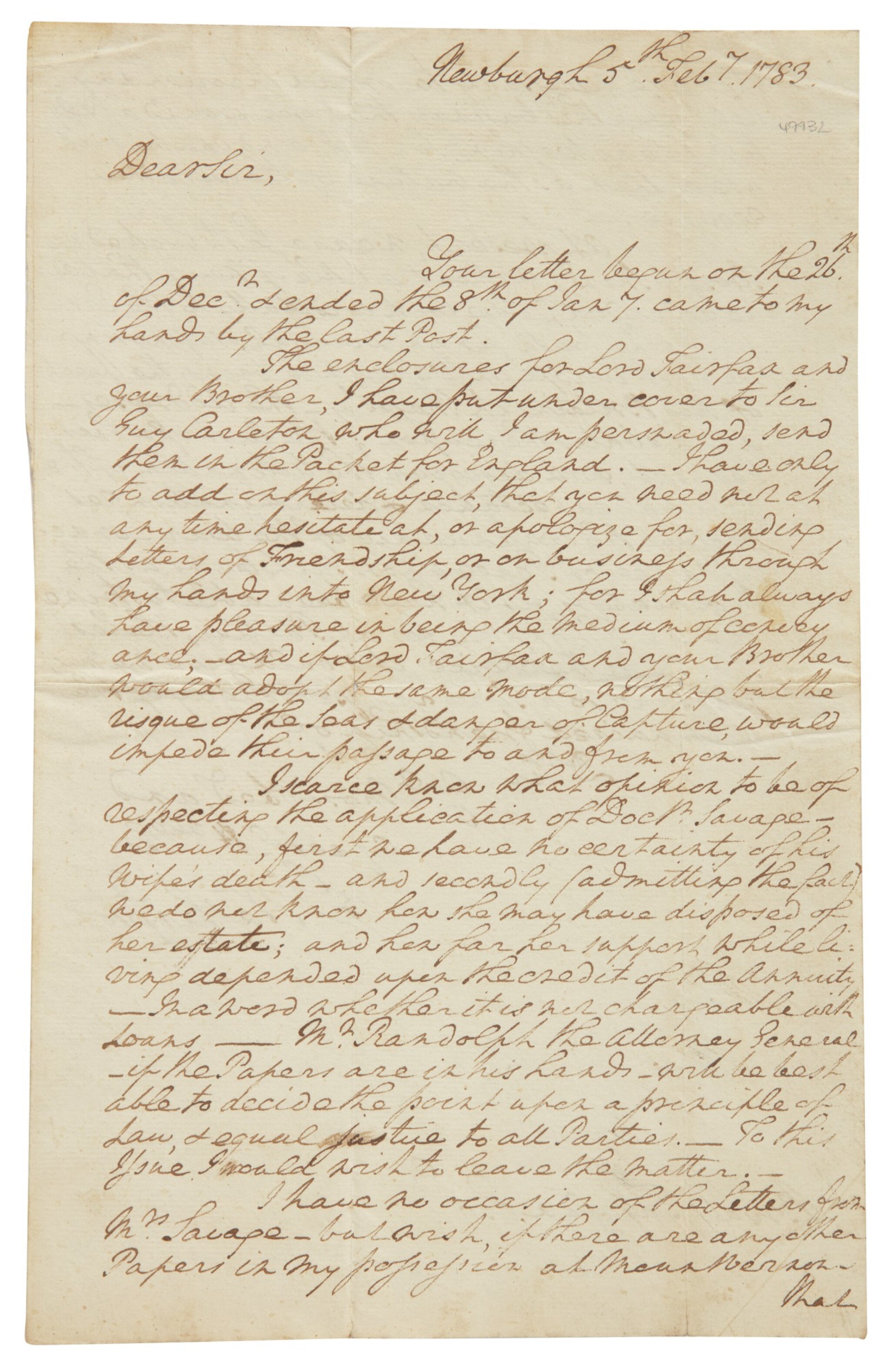 Autograph letter signed ("Go: Washington") as Continental Commander to Bryan Fairfax, hoping for good news regarding the peace negotiations to end the Revolutionary War—not knowing the preliminary articles of peace had been signed two weeks earlier

2 pages (12 5/8 x 7 7/8 in.; 320 x 202 mm) on a leaf of laid paper, Newburgh [Washington's Headquarters, Jonathan Hasbrouck House], 5 February 1783; infinitesimal marginal fold separations, two pinholes at intersecting fold. The consignor has independently obtained a letter of authenticity from PSA that will accompany the lot.

COLD, TIRED, AND ANXIOUS AT HIS NEWBURGH HEADQUARTERS, GEORGE WASHINGTON WONDERS TO ONE OF HIS OLDEST FRIENDS IF THE NEXT NEWS FROM GREAT BRITAIN WILL SIGNAL "THE CONTINUANCE OF THE WAR—OR ACCEPTANCE OF PEACE."

In February 1783, Lord Cornwallis's surrender at Yorktown was nearly two years past, but the Treaty of Paris, acknowledging the sovereignty of the United States, would not be signed and ratified for another eleven months. In the meantime, the British army still occupied New York City and Washington's Continentals were in winter camp at Newburgh. Among a host of problems facing Washington were the orderly departure of British troops, the need to win appropriate back-pay for his own soldiers, and the gradual erosion of his eyesight. This deeply personal letter reveals Washington's various frustrations, particularly the slow progress of the diplomats charged with ratifying the Treaty of Paris.

After acknowledging Fairfax's recent letter, Washington confirms that he has forwarded to Lord Fairfax in England a letter that Bryan Fairfax had sent to his care; he also affirms his willingness to continue such services: "The enclosures for Lord Fairfax and your Brother, I have put under cover to Sir Guy Carleton who will I am perswaded, send them in the Packet for England. I have only to add on this subject, that you need not at any time hesitate at, or apologize for, sending Letters of Friendship, or on business through my hands into New York; for I shall always have pleasure in being the medium of conveyance; and if Lord Fairfax and your Brother would adopt the same mode, nothing but the risque of the Seas and danger of Capture, would impede their passage to and from you."

The General next takes up another frustration: a festering legal matter that handcuffed him to his correspondent for over a generation. In 1765, the two young men were named trustees for the widow of the Rev. Charles Green. By 1767, Mrs. Green had remarried a Dr. William Savage, who immediately came to dominate her affairs, instigating many suits to recover debts owed to her late husband. It eventually became clear to the two trustees that Dr. Savage was a dishonest man; in one letter, Washington explicitly called him a "v-----n." Savage refused to pay his wife the £100 per year due from a trust fund. Eventually Washington and Fairfax forced him to post a bond of compliance.

"I scarce know what opinion to be of respecting the application of Doctr Savage—because, first we have no certainty of his wife’s death—and secondly (admitting the fact) we do not know how she may have disposed of her estate; and how far her support while living depended upon the credit of the Annuity—In a word whether it is not chargeable with Loans—Mr Randolph the Attorney General —if the Papers are in his hands—will be best able to decide the point upon the principle of Law, & equal justice to all Parties. To this Issue I would wish to leave the matter. I have no occasion of the Letters from Mrs Savage—but wish, if there are any other Papers in my possession at Mount Vernon that are necessary to, or can through any light upon this business, that you would apply to Mr Lund Washington for, and make such use of them as the nature of the case may require." Long after the Savages separated, long even after her death, legal skirmishes with Dr. Savage continued.

The conclusion of the letter reveals Washington's deep desire that news of a final peace will soon reach American shores: "At present, we are fast locked in Frost & Snow; without a tittle of News that can be depended on—We look wistfully to the East, and to the south of an Arrival; supposing the first European Vessell will bring the Speech of his Britainick Majesty—the Addresses—and Debates thereupon; the last of which, I expect, will discover the Ultimatum of the National expectation & determination, respecting the continuance of the War—or acceptance of Peace upon such terms as the Negociators for it have been able to strike out—If happily for all Parties, the last should be the choice. …" The Treaty of Paris was signed on 3 September 1783, and Washington was able to return to his beloved Mount Vernon by Christmas.

Bryan Fairfax (1736–1802) was a son of William Fairfax of Belvoir, a plantation below Mount Vernon. He served briefly under Washington’s command in 1756, but proved a poor soldier. Remarkably, their friendship remained unbroken though Fairfax opposed independence. When it became clear that America would not reconcile with the Crown, Fairfax declined to take an oath of loyalty to the King and retired to his Virginia estate. Regardless of their striking differences on political matters, he and Washington, and their families, remained close for the rest of their lives.

This letter does not appear in Fitzpatrick's edition of Writings of Washington. It appears online as an early access document of The Papers of George Washington.