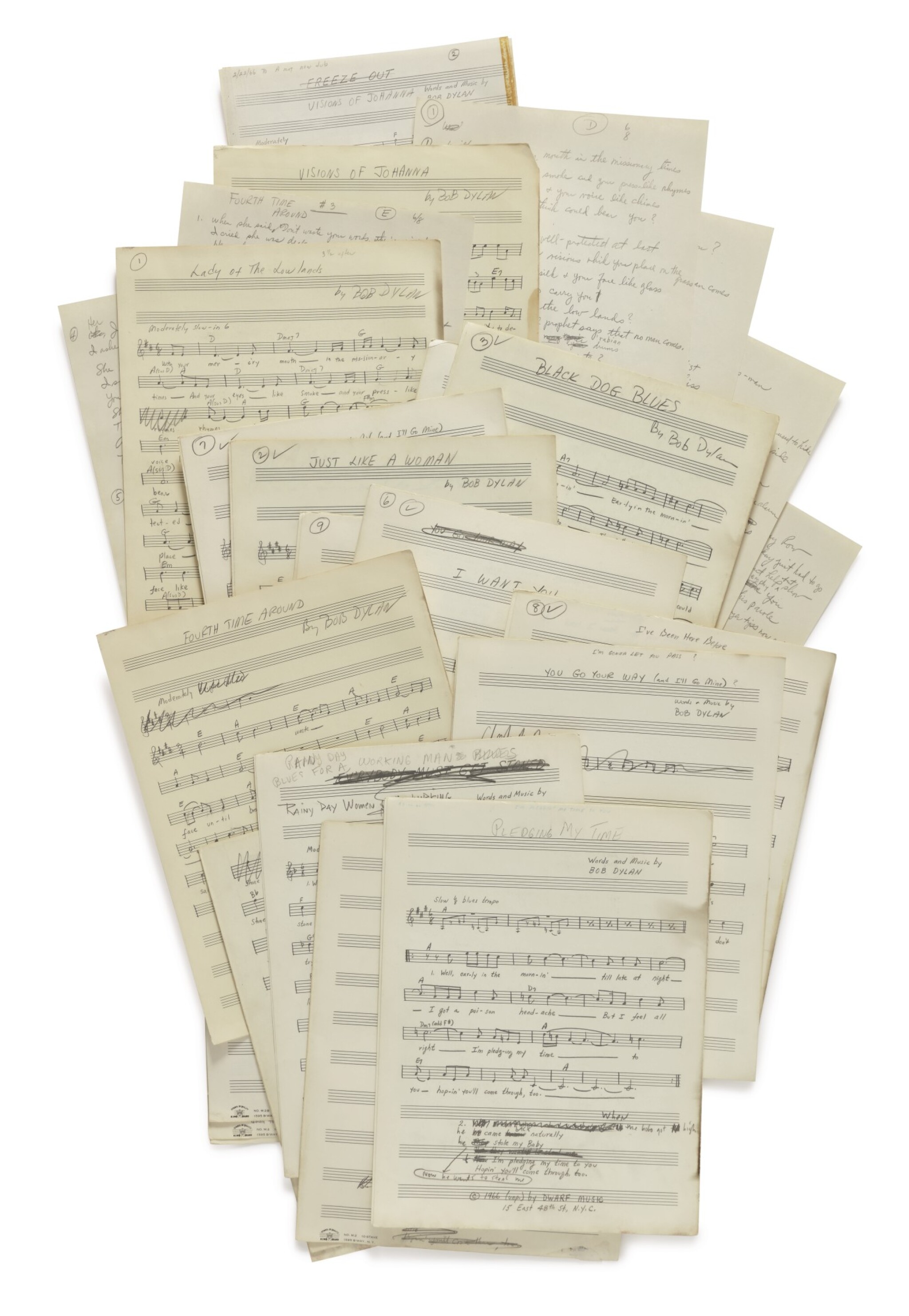 Together over 43 pages with at least 19 words of Dylan's holograph annotations (11 x 8 3/4 to 12 1/2 x 9 1/2), titled in another hand: "Dylan — In Work | Completed w/ corrections + revisions 3/18/66 | (c) 1966 (unp) by Dwarf Music | 15 East 48th St., NYC," predominately Di Biase's manuscript lyrical and musical notations in pencil on printed staff paper folios from Music Publishers Holding Corp, one version of "Visions of Johanna" xeroxed with assorted annotations; scattered handling wear, marginal tears and tape repairs, marginal heat damage to first few folios (affecting title leaves and part of "Rainy Day Women No. 12 + 35"), lacking "One of Us Must Know (Sooner or Later)" and "Stuck Inside of Mobile with the Memphis Blues Again."

A rare glimpse into Dylan's working process on Blonde on Blonde, “the closest I ever got to the sound I hear in my mind ... that thin, that wild mercury sound.”

Blonde on Blonde is hailed by many critics as Dylan's crowning achievement, and there is no doubt that 1965-1966 found the young musician working at the height of his powers. Following on the heels of 1965's Bringing It All Back Home and Highway 61 Revisited, Blonde was the final installment of a trilogy of albums that would cement Dylan's status as one of the most celebrated artists of the twentieth century.

Dylan had adopted a grueling touring schedule in the months that encompassed the release of Highway 61, a stint that included the infamous Newport Folk Festival which heralded Dylan "going electric." This period also featured the introduction of Dylan's legendary backing band the Hawks (later The Band). The Hawks would accompany Dylan on the first Blonde recording sessions at Columbia Studio A in New York City in January of the following year, frustrating Dylan and resulting in a single final track — "One of Us Must Know (Sooner or Later)" (possibly explaining the song's absence from the present archive). At suggestion of producer Bob Johnson, Dylan moved production efforts to Nashville, bringing Al Cooper and Robbie Robertson with him, and began to record with veteran session musicians Charlie McCoy, Hargus "Pig" Robbins, Wayne Moss, Joe South, and Kenny Buttrey. It was here, in the spring of 1966, that the album would take shape.

The present archive is dated 18 March 1966, placing it immediately after the second and final Nashville recording session, which took place on March 8-10. The session tapes were sent to Edoardo Di Biase, a Julliard-trained composer who did freelance music-copyright. Di Biase would write out the scores and lyrics by ear, returning the packet for Dylan to correct it by hand, before executing final typed lyrics and scores (as indicated by the manuscript note in one of the early folios: "Completed w/ corrections + revisions"). Additional annotations make reference to earlier sessions, as seen on "Visions of Johanna," which references the earlier dates: "Taken off dub 12/12/1965," and "Taken off dub again 2/22/66 as Visions of Johanna." The final product would then be submitted to the US Copyright Office by Dwarf Music, Dylan's joint music publishing company with manager Albert Grossman.

Twelve of album's fourteen tracks are present, with multiple drafts of "Rainy Day Women #12 + 35," (bearing the alternate additional titles: "Everybody [Let's] Must Get Stoned," "Rainy Day Blues for a Working Man," and "Rainy Day Women & The Working Man"); "Pledging My Time"; "Visions of Johanna" (bearing the additional excised title "Freeze Out"; "Temporary Like Achilles" (present as "I've Been Here Before"); "Absolutely Sweet Marie" (present as "Wanted Together (?)"); "Obviously Five Believers" (with earlier drafts bearing the title "Black Dog Blues"), and "Sad-Eyed Lady of the Lowlands" (present as "Lady of the Lowlands"). Throughout the collection there are at least 19 words of holograph corrections in Dylan's hand, although there are quite possibly a number of additional unidentified corrections and strikethroughs.

The second verse of "Pledging My Time" bears the most substantial edits in Dylan's hand, with the original transcription reading: "Well I don't know about you but I --| It came to me naturally | They stole my baby | Then they wanted to steal me." In the revised version, Dylan has scratched out most of the original transcription, writing in "When the hobo got high | [he came] back [naturally] | [He stole my baby] | Now he wants to steal me," which aligns more closely, though not exactly, with the recorded verse. Additional annotations in his hand can be found on drafts of "Temporary Like Achilles," and "Most Likely Five Believers," that latter of which bears the copyrighter's note: "Corrections by Dylan."