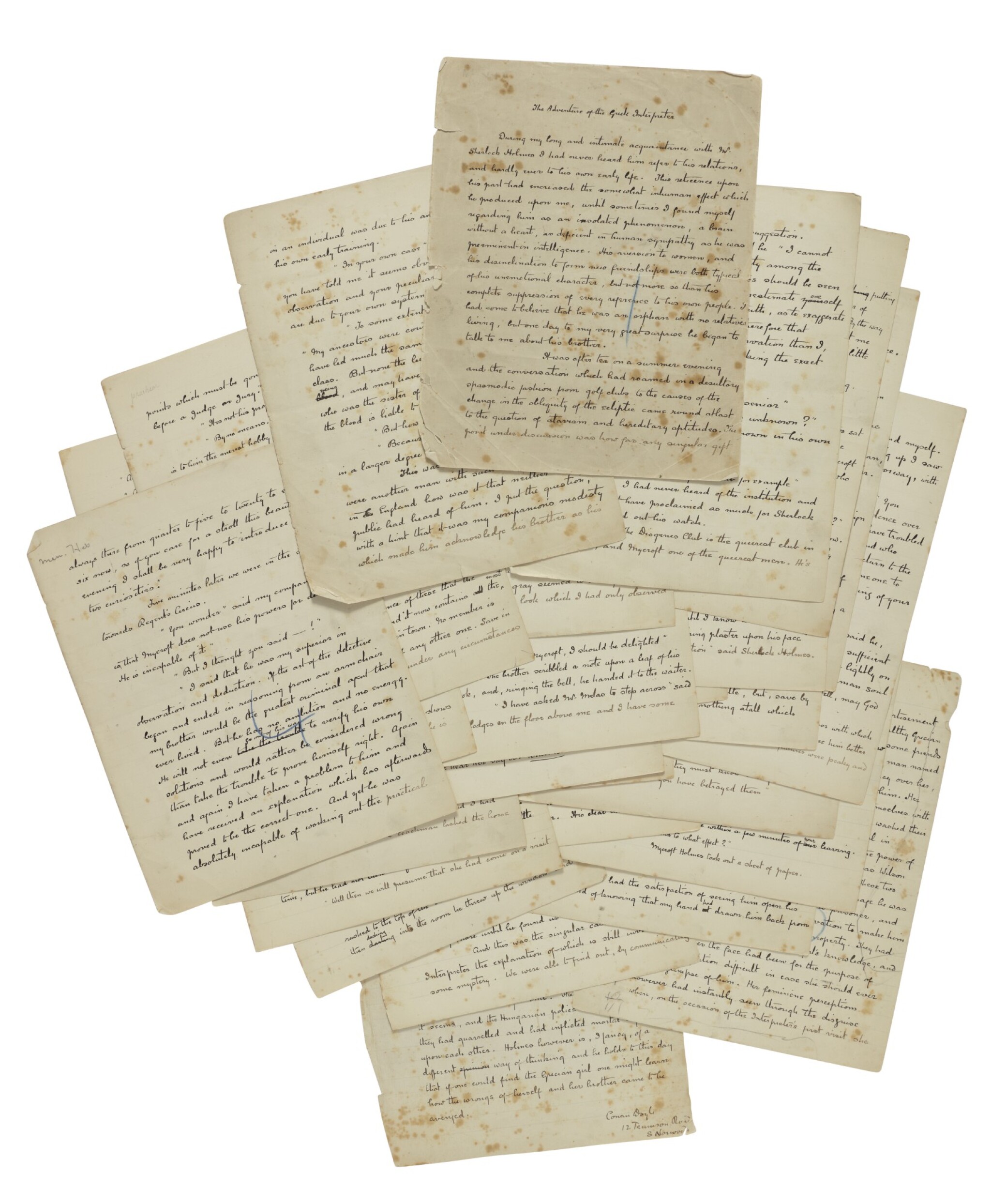 34 pages, numbered through the text in blue pencil, on 34 sheets of ruled paper neatly torn from a 4to notebook, marked and issued as a printer’s copy for its first publication, with several revisions, signed and inscribed at the end (“Conan Doyle | 12 Tennison Road | S. Norwood”), n.d. [but 1893]; some foxing, heavier to some leaves than others, marginal tears not affecting text, pp. 22 and 33 with pencil scribbling (presumably by a child, and likely one of Doyle’s), some light fingersoiling. Housed in custom case.

"Art in the blood is liable to take the strangest forms."— One of Doyle’s most enduring Sherlock tales, which introduces Mycroft Holmes and the Diogenes Club

In terms of its twists and turns, "The Adventure of the Greek Interpreter" is one of Holmes's more straightforward cases, which is almost certainly to do with the introduction of Mycroft, Sherlock's brilliant but comparatively sedentary brother. The tale is perhaps meant to caution against such "arm-chair detectives," as the narrative concludes with three dead men, and several unpunished murderers. Despite such seeming stylistic and thematic aberrations, "The Adventure of the Greek Interpreter" is a tour-de-force of deductive observation, offering a prime example of Doyle's genius, and underscoring the originality of his characters.

"The Adventure of the Greek Interpreter" first appears in the Strand Magazine in September 1893, and was reprinted in Memoirs of Sherlock Holmes in 1894. It was in this collection that Doyle was compelled to finish off his hero in "The Final Problem." If, however, the author was growing weary of his creation, the present tale bears no evidence of this. With the introduction of the Diogenes Club, and a cast of memorable ruffians, "The Adventure of the Greek Interpreter" has endured as a high-point of the author's oeuvre, and become an essential touchstone for those seeking to adapt and update Doyle’s work.

Doyle himself ranked "The Adventure of the Greek Interpreter" seventeenth in a list of his nineteen favorite Sherlock Holmes stories. It also, as mentioned above, holds the distinction of introducing Watson and the reader alike to the Diogenes Club ("the queerest club in London"), and Mycroft ("one of the queerest men"). The club and character—along with the general themes of the narrative—have become prominent features in recent adaptations, proving to be prime points of entry into, and offer expansion of, Doyle's tales. "Art in the blood, Watson. It is liable to take the strangest forms," Sherlock Holmes (Johnny Lee Miller) explains to Dr. Joan Watson (Lucy Liu) in Elementary (CBS), making direct reference to one of Holmes's assertions in this story. Another episode in the series, titled "Art in the Blood is Liable to Take the Strangest Forms," transfers many elements of the original story to the present day. And in the 24th episode of Elementary, Sherlock describes Mycroft (Rhys Ifans) as a man who "has no ambition and no energy," and who "would rather be considered wrong than take the trouble to prove himself right," directly quoting from the text. In an episode of Sherlock (BBC), titled "A Scandal in Belgravia", Watson (Martin Freeman) is seen drafting a blog post with the heading "The Geek Interpreter." In another, "The Empty Hearse," Sherlock (Benedict Cumberbatch) and Mycroft (Mark Gatiss) engage in a friendly competition related to analyzing a knitted hat, which echoes a scene in this story where the brothers observe a man on the street through the window of the Diogenes Club. In “The Abominable Bride,” a Mr. Melas is also referred to as waiting to see Mycroft after he has discussed a case with Sherlock and Watson.