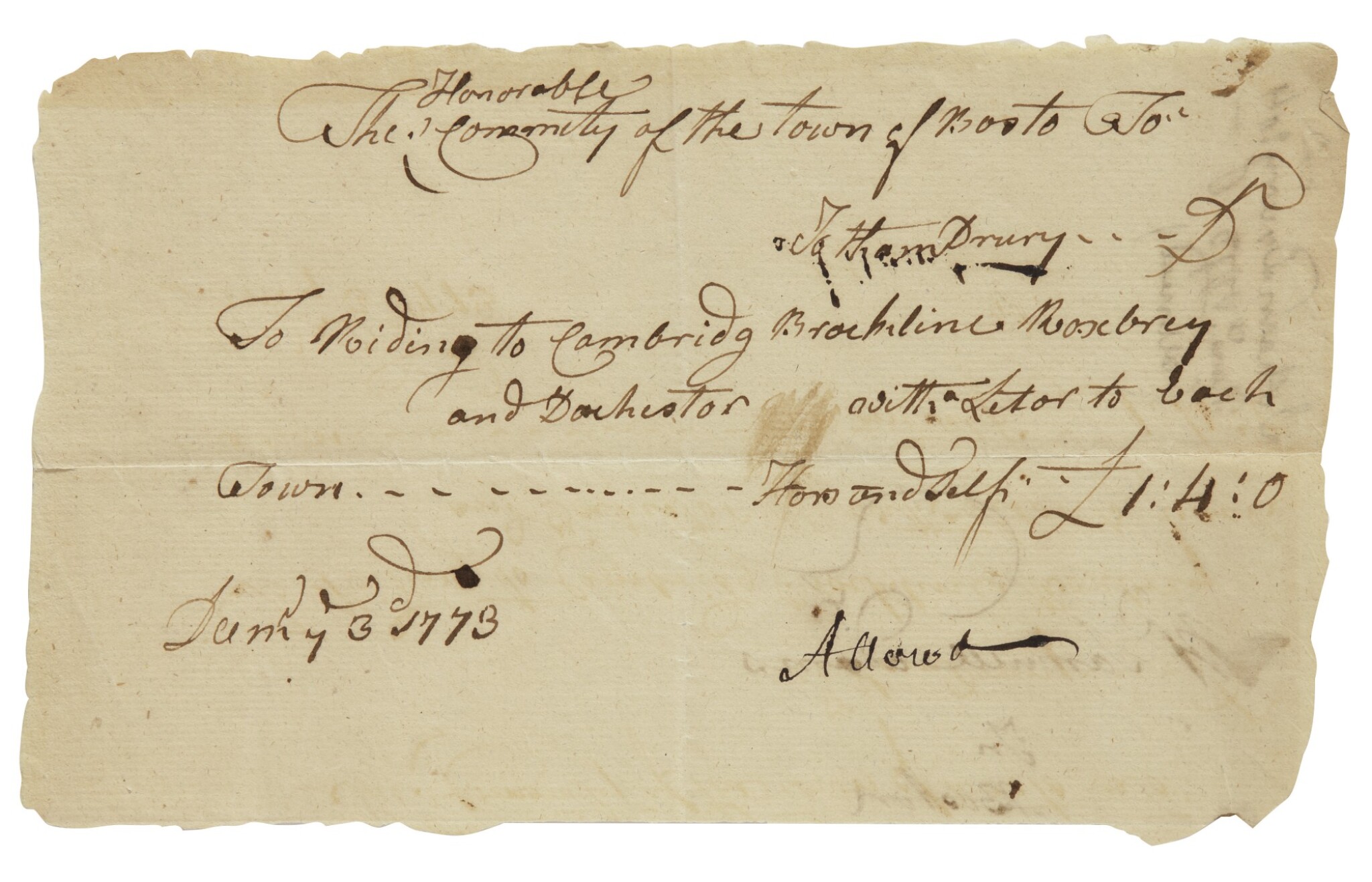 1 page (4 1/2 X 7 in.; 108 x 178 mm). Docketed on verso by William Cooper, clerk for the Boston Committee of Correspondence; short fold separation at right margin. The consignor has independently obtained a letter of authenticity from PSA that will accompany the lot.

Shortly after his ride through the area surrounding Boston, Drury drew up an invoice to "The Honorable Commity of the town of Bosto[n] To Jon[a]than Drury... To Riding to Cambridg[e] Bro[o]kline Roxbury and Do[r]chestor with Letor to Each Town... [...] Hors[e] and self £1:4:0".

Dury, after being hired by the Boston Committee of Correspondence, had delivered copies of a letter dated 28 November 1773, which warned of the arrival of the Dartmouth: "A part of the Tea ship’d by the East India Company is now arrived in this Harbour." The letter also called for recipients to attend a meeting at Faneuil Hall the following morning, in order "to give us your advice what steps are to be immediately taken in order effectually to prevent the impending evil." The response to the letter was overwhelming, and Samuel Adams was forced to move the meeting from Faneuil Hall to the Old South Meeting House.

The assembly passed a resolution urging the captain of the Dartmouth to leave the port without unloading the tea or paying the import duty. In response, Governor Hutchinson blocked the Dartmouth from leaving port without landing the tea. Then, two more tea ships, the Eleanor and the Beaver, arrived in Boston, inciting further unrest. On 16 December 1773, thousands gathered in and around the Old South Meeting House to register their disapproval and protest this second landing. When the crowd learned that Governor Hutchinson refused to yield and the ships would remain in the harbour, Samuel Adams announced: "This meeting can do nothing further to save the country." People then began to stream out of the Meeting House, some of whom were clad in Mohawk costumes, which would figure later that night as the Sons of Liberty boarded the tea ships and dumped their cargo into the harbor.

Minutes of the Boston Committee of Correspondence 6:458-460