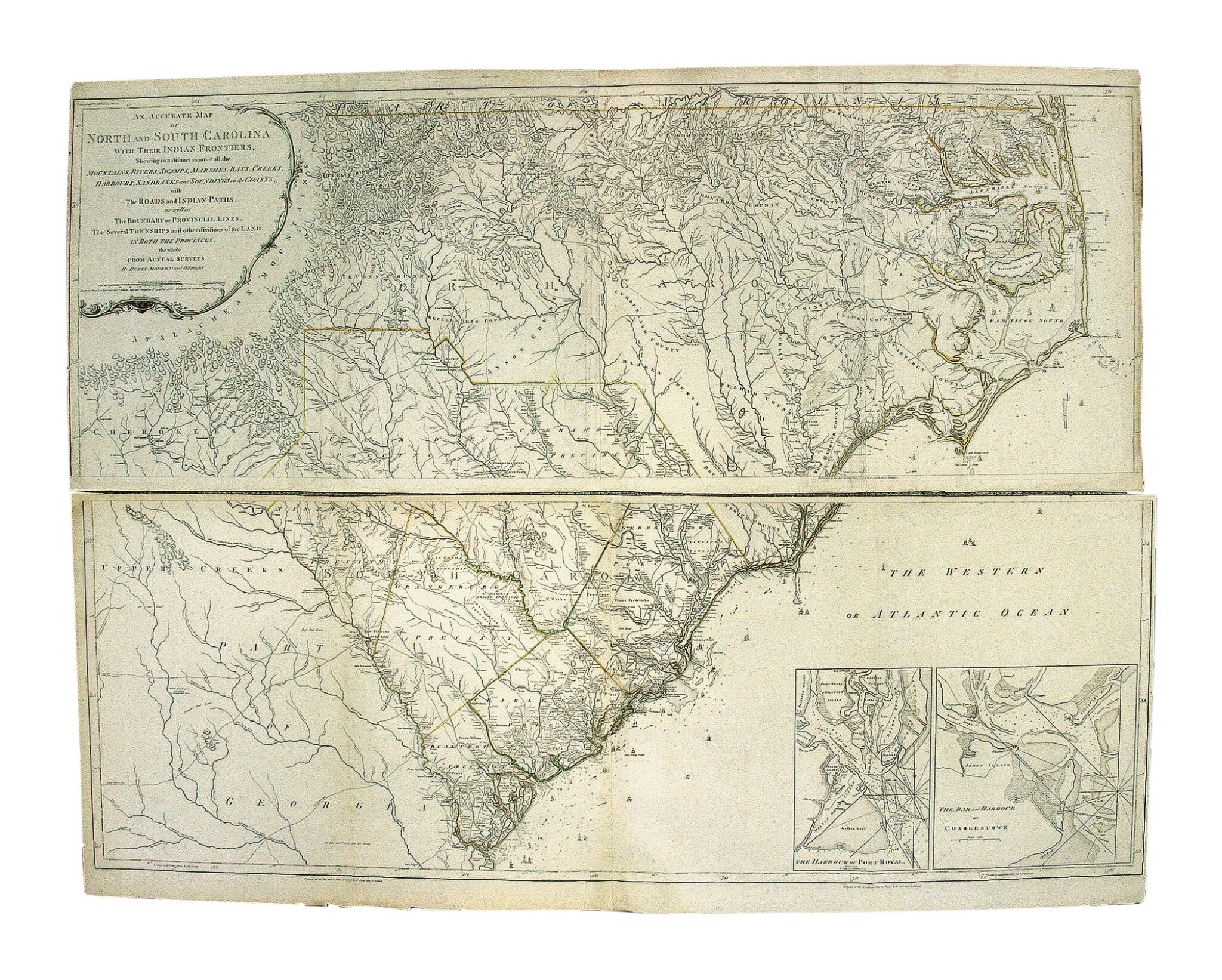 An Accurate Map of North and South Carolina, with their Indian Frontiers, Shewing in a distinct manner all the Mountains, Rivers, Swamps, Marshes, Bays, Creeks, Harbours, Sandbanks and Soundings on the Coasts, with the Roads and Indian Paths as well as the Boundary or Provincial Lines, the Several Townships and other divisions of the land in both the Provinces; the whole from Actual Surveys by Henry Mouzon and others. London: R. Sayer & J. Bennet, May 30th, 1775 [but 1776]

A rare monumental work, one of the finest and most important maps of the Carolinas — second state with "Fort Sullivan"

The present map "appeared on the eve of the American Revolution, and its up-to-date geography made it the most widely consulted map of the area used in the war effort" (Degrees of Latitude 209).

One of the most handsome maps of the Carolinas ever made, being very finely engraved with inset maps of Charleston Harbor and Port Royal Harbor in the lower left, it is so detailed and geographically advanced that it remained the seminal map of the Carolinas for the following two generations. Its appearance in the days leading up to the American Revolution ensured that it was the primary map used by field commanders on both sides as the dramatic events of the conflict unfolded in the Carolinas. This is demonstrated by the fact that the very copies used by three of the most important commanders are today preserved in libraries. George Washington's copy, folded and mounted on cloth, resides in the collection of the American Geographical Society. The French commander, the Comte de Rochambeau's copy in the Library of Congress. British commander, Sir Henry Clinton's copy is housed in the William L. Clements Library at the University of Michigan.

Henry Mouzon produced a map that was one of the finest expressions of American cartography in the years leading up to the Revolution; however, he remains one of the most enigmatic of all the mapmakers of this period. All that is known of him is that this masterly work was devised by Henry Mouzon of Craven County, who was a professional surveyor, and was described as having left "Sundry maps and two copper plates" in the inventory of his estate after his death in April, 1777. Mouzon first announced his intention to publish a map depicting just South Carolina in an advertisement in The South Carolina and American General Advertiser in the Spring of 1774. However, as Mouzon proceeded he elected to undertake the much greater endeavour of covering both Carolinas. The Carolinas were officially divided into two separate colonies, North and South, in 1730.

Mouzon's great work was first published by the leading London firm of Sayer & Bennett in 1775. Upon publication, it became clear that Mouzon had surpassed all of his predecessors in terms of scope and accuracy of the region depicted. He largely derived his portrayal of South Carolina from the two excellent recent maps by the military engineer James Cook, A Map of South Carolina (1771) and A Map of the Province of South Carolina (1773). He was also well apprised of William De Brahm's monumental Map of South Carolina and a Part of Georgia (1757). Mouzon importantly improved upon these sources by providing greater definition to the rivers and more detail regarding the native settlements located to the west of the Cherokee Line. With regard to his depiction of North Carolina, Mouzon used John Abraham Collet's magnificent A Compleat Map of North-Carolina (1770) as a basis, but superseded it by adding the delineation of more counties and a far more accurate delineation of the Catawba River and its tributaries. It would also seem that Mouzon consulted an alternate source for the depth soundings noted off of the coastline, as the hydrographic information is decidedly different from that used by Collet.

This map exists in three states, of which the present copy represents the second state and which is distinguished from the former by the addition of "Fort Sullivan" to the inset of Charleston Harbor in the map's lower right. It was included in the 1776 edition of Thomas Jefferys' American Atlas, one of the most important works in the history of American cartography.