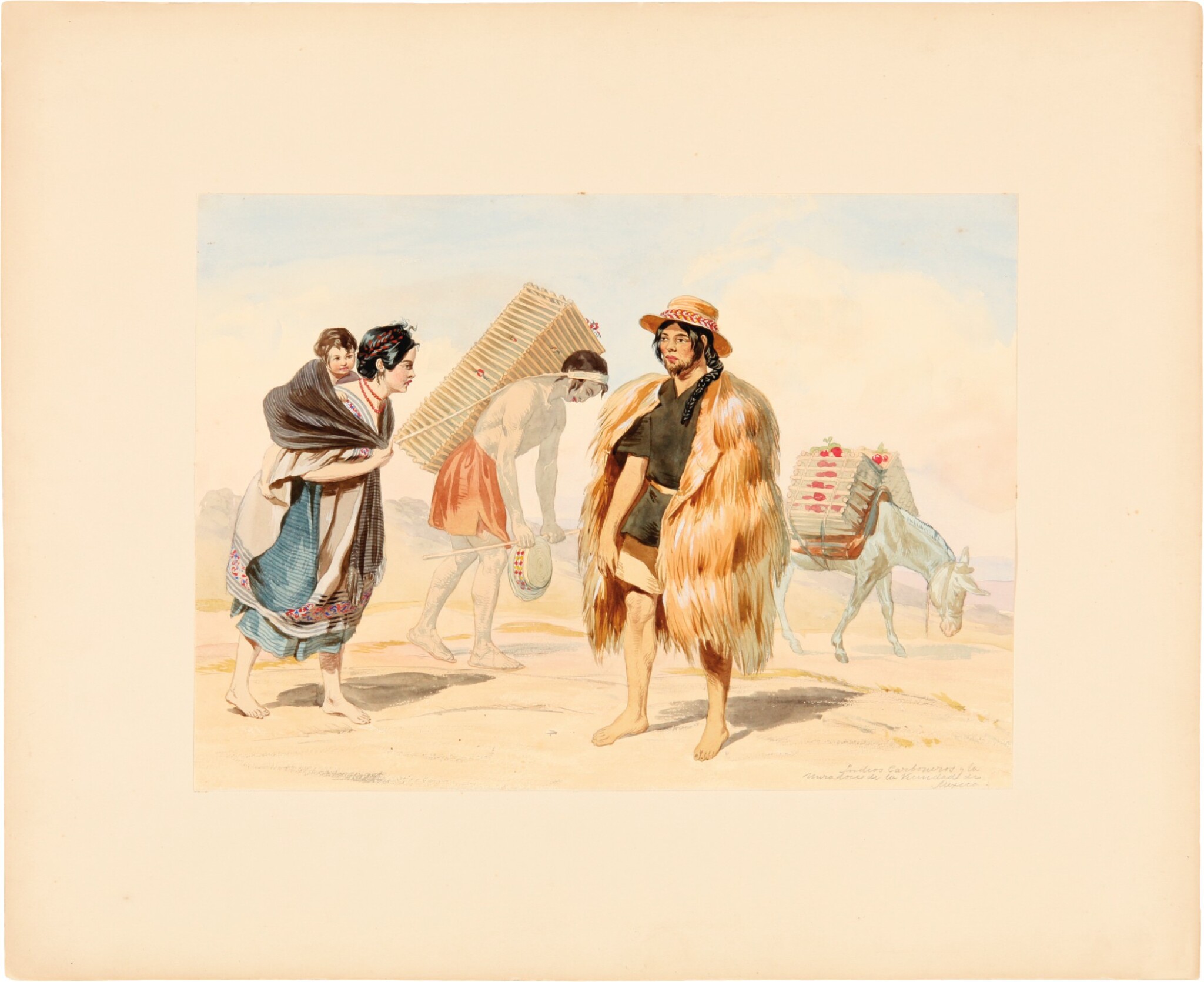 A suite of four highly accomplished watercolors, which served as the models for four lithographs published in his Voyage Pittoresque et Archeologique dans la partie la plus interessante du Mexique. [Mexico: N.D., but 1829-1834]

A striking suite of four highly-accomplished watercolors by Nebel, one of the most important illustrators working in Mexico during the first part of the 19th century

﻿The watercolors all depict native and mestizo inhabitants situated in dry landscapes with hills in the background. The images represent a variety of local types and occupations including Indian women, men, and children, adult mestizos, coal miners, mule skinners, and fruit vendors. The costumes are portrayed with much attention to detail, particularly the embroidered clothing worn by the native women and the male laborer's costumes, and the foregrounds and background are finely rendered with light washes.

A German architect and painter, Nebel travelled to Mexico in 1829 "to paint scenes of a country he knew from the writings of Humboldt, Antonio León y Gama, Bernal Díaz del Castillo, and Hernán Cortés. He remained in Mexico until 1834, visiting and painting the cities of Puebla, Zacatecas, Aguascalientes, Guadalajara, Veracruz, Jalapa, Mexico, and San Luis Potosí. He returned to Europe and in Paris prepared his memorable Voyage Pittoresque et Archeologique with its fifty plates" (Howgego). The university-trained artist "was drawn there at first by an interest in the archaeological remnants of the Aztec empire, but became a visual chronicler of modern Mexico as well. Nebel was one of many European artists intrigued by the landscape and peoples of the former Spanish empire in the Americas, barred from view for centuries, but from the 1820s onward open to both travel and investment, and of particular interest to the French and English. His book combines a taste for the picturesque with a clear-eyed evaluation of the country and its assets" (Miles & Reese).

Nebel's Voyage Pittoresque et Archeologique was first published in Paris in 1836 with fifty lithographic plates, twenty of which were issued in color. Of these twenty, ten specifically portray local inhabitants of various classes; six of these are of natives or working- class mestizos. The present watercolors are the originals for four of these six images, including two of the three illustrations of Indians published in the Voyage... Comparison of these watercolors and the published images are instructive in regards to the lithographer's art and craft. The individuals in all of the lithographs are darker than in the original artwork. Certain details, such as elements of costumes and architectural motifs, are highlighted or expanded in the published images, while other visual elements in the foreground and background of the lithographs are given less emphasis than in the original. Such changes between the original watercolors and the printed images highlight the technical and aesthetic concerns of the lithographer and publisher creating reproduced images for the market.

Nebel's reputation as the most important illustrator working in Mexico was later confirmed with the publication of George Wilkin Kendall's The War Between the United Sates and Mexico Illustrated. This account of the Mexican American war, published in 1851, included twelve hand-colored lithographic plates based on Nebel's paintings of major battles of the war. These dozen images became the source for numerous prints by other artists who copied and adapted Nebel's illustrations of various conflicts.

In a similar manner, many of Nebel's earlier illustrations in his Voyage Pittoresque were also reproduced and modified by the artist himself, as well as other printers and publishers. These included topographic views found in numerous works on the Mexican American war as well as his depictions of local inhabitants. "Nebel's [Voyage…] was a classic. It was published in both French and Spanish editions, and several of the fifty illustrations, many of them of the costumbrista or costume-picture genre, were widely copied" (Eyewitness to War).