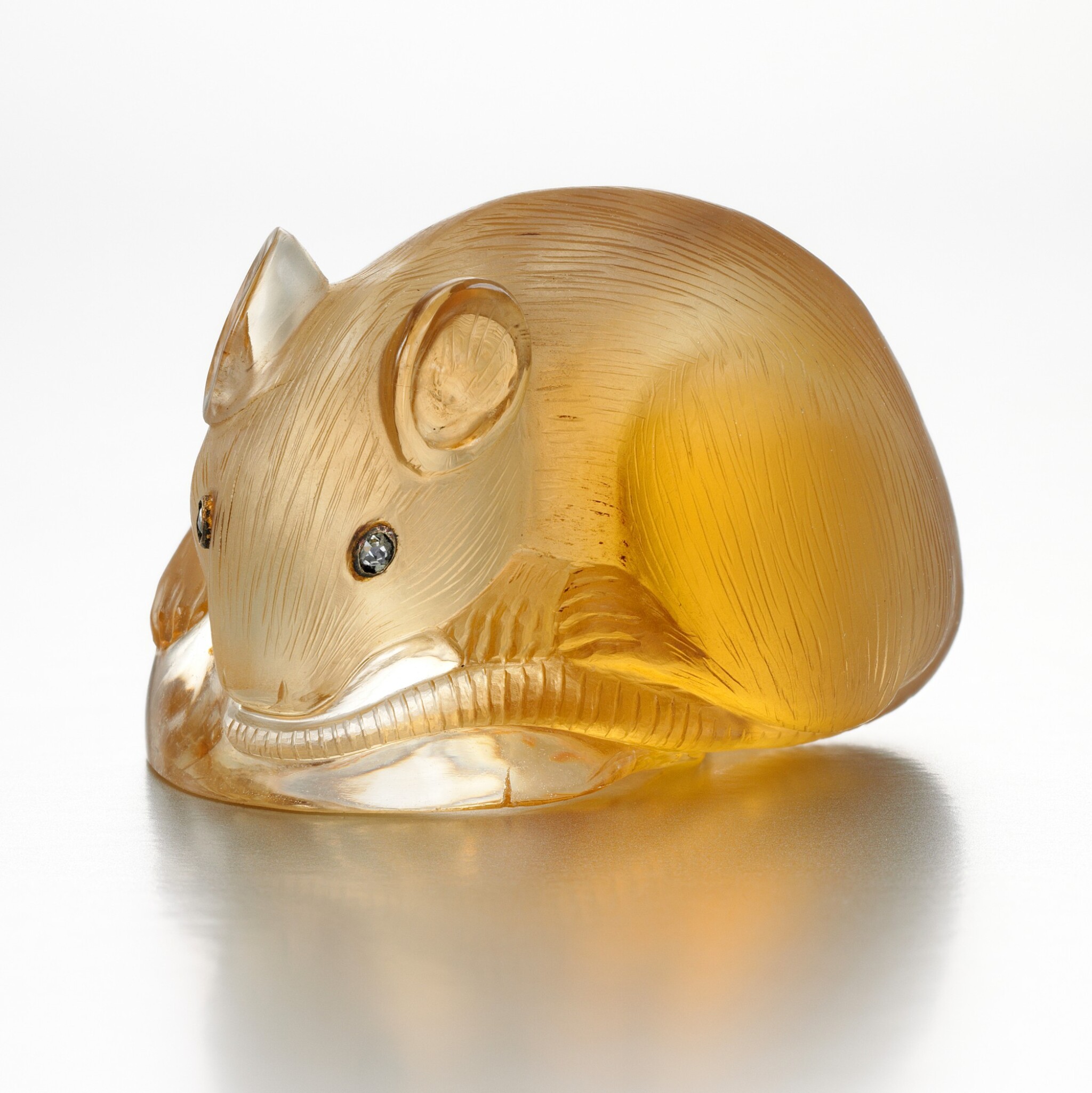 A La Vieille Russie, New York
Helen Babbott Sanders
The Brooklyn Museum, New York, bequest from the above in 1983

Carved from a glowing specimen of citrine that catches light differently from all angles, this Fabergé model of a mouse is carved in the style of a Japanese netsuke. Carl Fabergé was a passionate collector of netsuke, keeping over 500 animal models in his apartment on Bol’shaya Morskaya. It has been suggested that Fabergé’s love of netsuke may have been the origin for all the firm’s animal studies. The influence of Japanese models can be seen in the curve of the tail and hemispherical vessel upon which the mouse crouches, a nearly identical example in smoky quartz forms part of the Woolf family collection and is included in G. von Habsburg, Fabergé - Hofjuwelier der Zaren, Kunsthalle der Hypo-Kulturstiftung, no. 370, pp. 205-206 and G. Munn, 'Fabergé and Japan', The Antiques Collector, January 1987, pp. 38-39.

‘It is impossible to list all the animals that were used as themes for these figures, but it should be said that the pose was always as compact as possible, as dictated by the technique of the material’ ('Birbaum Memoirs' in G. von Habsburg, M. Lopato, Fabergé: Imperial Jeweller, Milan, 1993, p. 459).

It was of the greatest concern to Fabergé’s craftsmen that the perfect mineral specimens, of the right colour and markings were sourced for each individual study. In the present study of a mouse, the citrine quartz has been chosen for its depth of colour and the light it emits through the study. Quartz played a large part in Fabergé’s hardstone production, especially pink and white fissured verities, making the lemony amber colour of the present study rarer. According to Franz Birbaum’s memoirs, the structure of quartz, with its many fissures complicated the work:'...but the results always compensated for failures and breakages. This quartz, which is completely transparent in places and covered in others with a beautiful white pattern like frost patterns on glass...' ('Birbaum Memoirs' in G. von Habsburg, M. Lopato, Fabergé: Imperial Jeweller, Milan, 1993, p. 457).

Once the carving of each animal was completed, it was returned to the workshop of Fabergé’s head workmaster. In the case of the present studies, most likely that of Michael Perchin or Henrik Wigström. In the workshops the animals were then polished and mounted with their finishing touches, such as their gem-set eyes. These works were then retailed though Fabergé’s shops in St Petersburg and London, where they were broadly collected. Notably an inventory of the possessions of Empress Maria Feodorovna and Emperor Alexander III compiled by the director of the Anichkov Palace after 1917 lists more than one hundred Fabergé stone animal studies (C. de Guitaut, op. cit., p. 34).