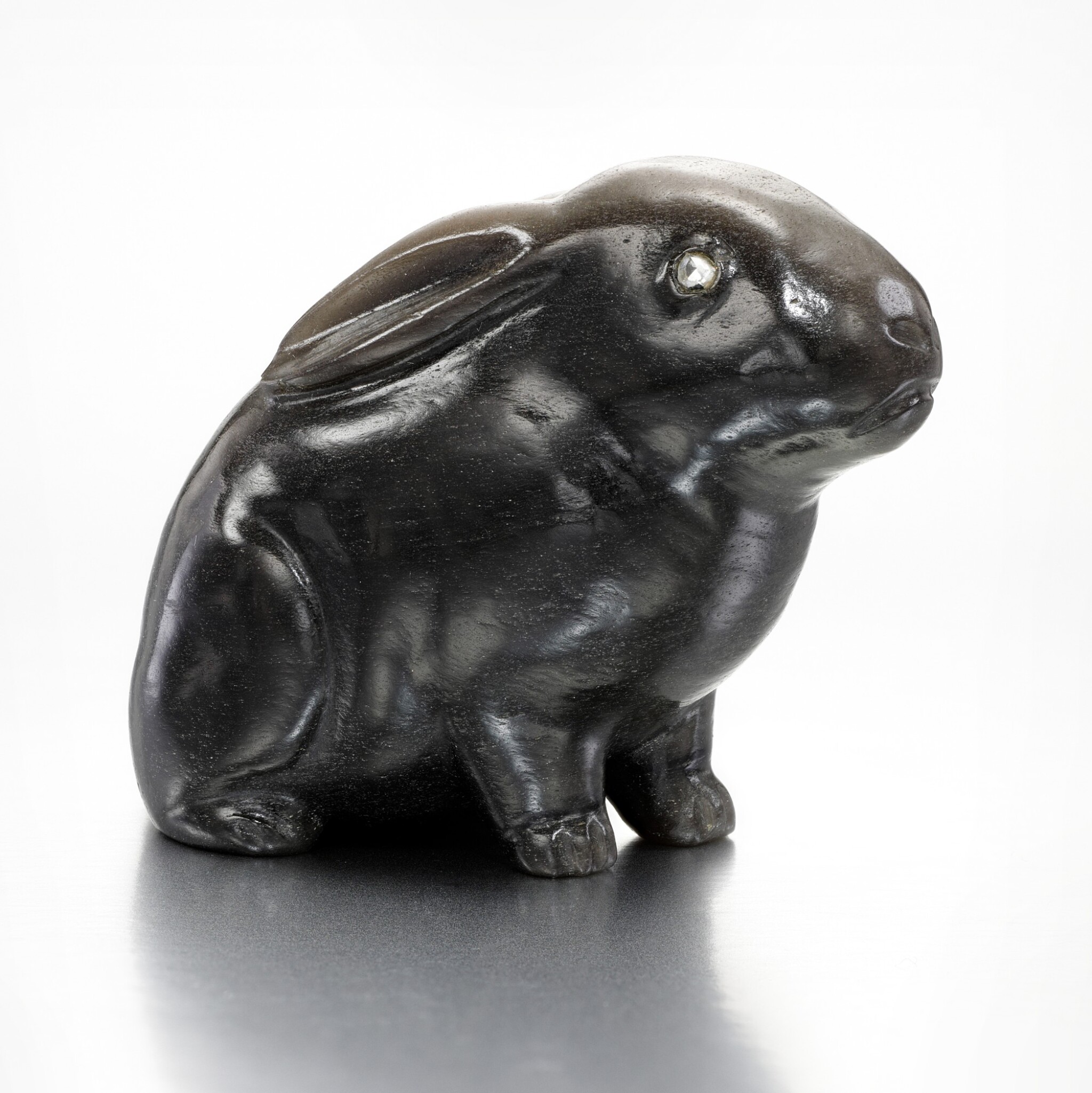 This lustrous obsidian model of a rabbit is carved in the style of a Japanese netsuke. Carl Fabergé was a passionate collector of netsuke, keeping over 500 animal models in his apartment on Bol’shaya Morskaya. It has been suggested that Fabergé’s love of netsuke may have been the origin for all the firm’s animal studies.

It was of the greatest concern to Fabergé’s craftsmen that the perfect mineral specimens, of the right colour and markings were sourced for each individual study. In the present study of a rabbit, the obsidian has been chosen for its range of silky opalescence beneath the surface of its polish, the effect is extremely lifelike and evocative a rabbit’s softly shining fur.

Obsidian is a naturally occurring volcanic glass, created by the rapid cooling of lava. It comes in a number of forms, the most desirable being specimens like that use in the present rabbit, which have an iridescent or metallic ‘sheen’ caused by light reflecting from minute inclusions of mineral crystals, rock particles, or gas. The colour of the iridescence in this Fabergé rabbit study is created by the use of rarer ‘silver obsidian’. Due to the range in its sheen, obsidian was often employed in Fabergé’s hardstone studies, Birbaum mentions it in his memoirs:

‘Of the animal figures the caricature elephants were particularly successful. They are of various stones in the form of bibelots, obsidian seals and walruses. The effect of wet fur is achieved by the play of colours’. ('Birbaum Memoirs' in G. von Habsburg, M. Lopato, Fabergé: Imperial Jeweller, Milan, 1993, p. 459)

Fabergé’s animals sculpted after netsuke lie at the very heart of the firm’s popular animal designs and their stylised carving allowed even greater creativity with natural materials. A nearly identical model of a rabbit in lapis lazuli from the de Guigné collection is included in G. von Habsburg, Fabergé in America, New York, 1996, no. 32, p. 51 and a further related model carved in purpurine was included in the Exhibition catalogue, Fabergé -Cartier, Rivalen am Zarenhof, Munich, 28 November 2003 – 12 April 2004, no. 345, p. 250.