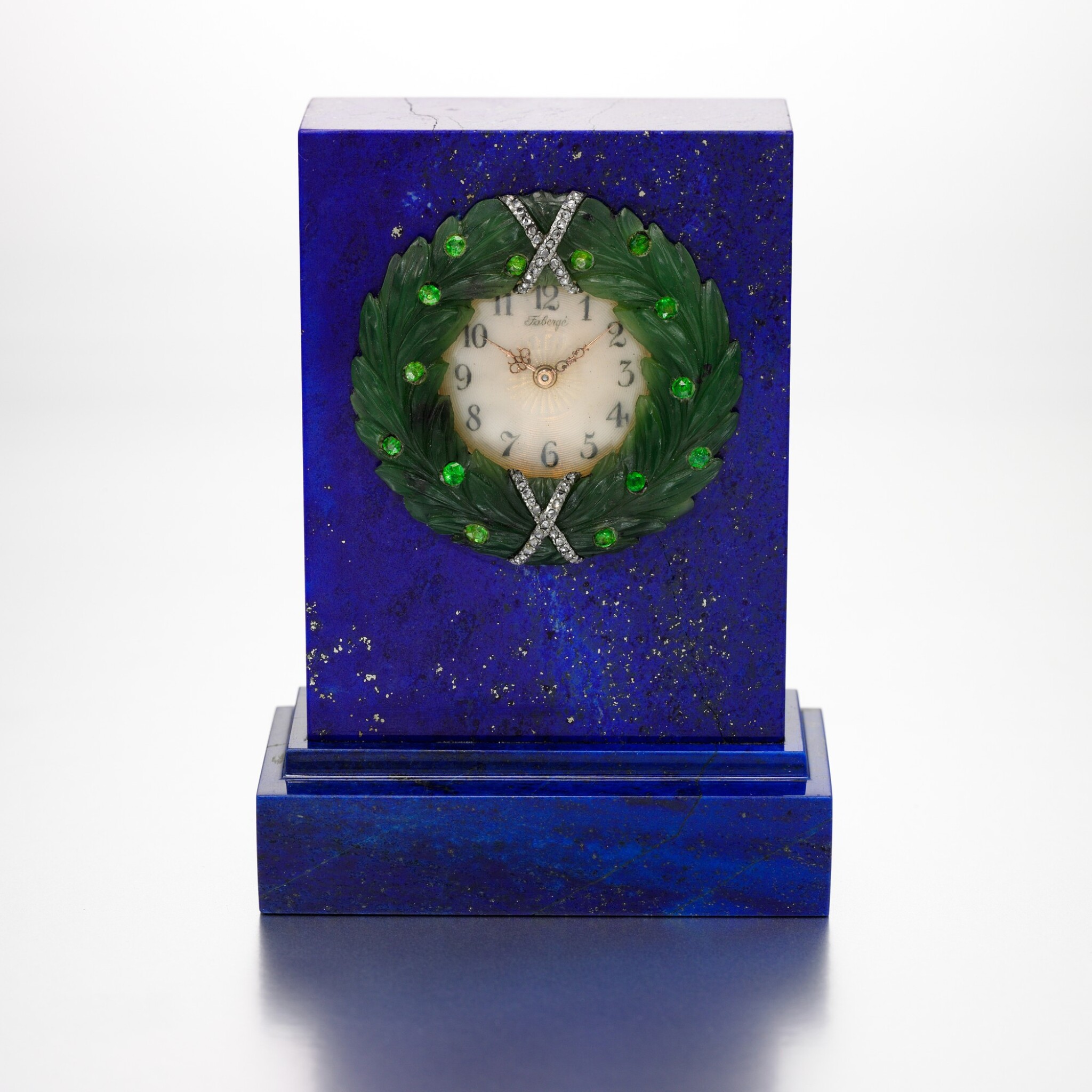 The forthcoming publication of Henrik Wigström's second album of drawings by Ulla Tillander-Godenhielm et al. includes the original design for this clock, recorded under number 15165. The design suggests that two versions of the clock were created, and illustrates the present clock to the left, detailing the setting of demantoid garnets in the nephrite wreath. The discovery of this design is an exciting and important addition to the storied history of this exceptional Fabergé clock.

This clock was originally purchased in 1915 by Mrs Leeds, one of Fabergé’s most extravagant and prolific customers in London. First introduced to the delights of Fabergé by Lady Paget, Nancy Leeds made her first purchase from the firm in 1913, for the handsome sum of £208.10. Her purchases from the London Branch of Fabergé between 1913 and 1917 amounted to £3,292 and were primarily made between 1915 and 1916 while she lived at 41 Grosvenor Square. She was also a great patron of Cartier, where she purchased lavish jewels, but preferred Fabergé for objets de vertu, including clocks such as the present lot, cigarette cases, animal carvings, flower studies and frames. Her collection even included a Fabergé mistletoe sprig similar to that in the present sale (K. McCarthy, Fabergé in London, China, pp. 167-168).

Eventually known as Princess Anastasia of Greece and Denmark (1878 – 1923), Nancy Leeds was a wealthy American heiress. Her second husband William Bateman Leeds (1861 – 1908) had amassed a vast fortune in the tin industry and when he died in 1908 left her an inheritance of nearly forty million dollars.

The wealthy, thirty-year-old widow chose to settle in Europe, where she socialised among the aristocracy and became a member of the Greek and Danish Royal Families through her third marriage to Prince Christopher of Greece and Denmark (1888 – 1940), the youngest child of King George I of Greece (1845 – 1913) and his consort, Grand Duchess Olga Constantinovna of Russia (1851 – 1926). Her fortune notably helped fund the Greek Royal Family during their exile in the 1920s.

As a fervent jewels lover and collector, Leeds was a noted client of Cartier, having her own hall in the famous French jewelry shop. Her jewelry collection was estimated to be worth over a million dollars, including many stones, believed to be unique for size and perfection of quality. In 1910, she created a stir by buying a Cartier necklace of pearls and diamond rondelles for $570,000. In the portrait of her by Giovanni Boldini, executed in 1914, the princess is wearing a tiara surmounted by seven diamonds created by Cartier a year before.

It is no surprise that Mrs Leeds was a prolific collector of Fabergé and Cartier. The two firms were in direct dialogue and great competition for Imperial, Royal and wealthy patronage and the present clock is a notable example of the way in which Fabergé inspired Cartier objects.

The presence of Fabergé at the 1900 Universal Exhibition in Paris sparked interest and admiration in the Cartier brothers, causing them to reinterpret a number of Fabergé’s signature designs, notably desk clocks, animals and flower studies. Cartier’s interest in emulating works by Fabergé was driven both by aesthetics and the allure of Russian patronage. Notably the firm produced a series of blue and green desk clocks relating directly to the palette and neoclassical design of the present Fabergé clock. This combination of blue and green became one of the most iconic used by Cartier during the period, appearing on objects and accessories designed with blue guilloché enamel combined with jade, aventurine, fluorite and eventually jadeite and lapis lazuli, in direct correlation to the present clock. For a Cartier desk clock clearly inspired by the aesthetic of the present Fabergé clock, carved from agate and guilloché enamelled in blue and green by Cartier, dated 1909, please see the Exhibition catalogue, Cartier, Le Style et L'Histoire, Paris, 4 December 2013-16 February 2014, no. 94, p. 105.

While directly inspired by Fabergé designs, Cartier's Russian objects never matched the craftsmanship, ingenuity or quality of materials used in Fabergé's original designs. The present Fabergé desk clock is a triumph of the firm's lapidary workshops and the quality of lapis lazuli used, with its ultramarine colour and shimmering pyrite flecks, is astounding. The further details of the dark-green, translucent nephrite laurel wreath, precisely carved and set with delicate demantoid garnets and rose-cut diamond-set ribbons, make the present clock uniquely beautiful in Fabergé's oeuvre. Exemplary of Fabergé's Modernist designs, there are other known examples of similar hardstone desk clocks by Fabergé, notably another lapis version with gold-mounts (U. Tillander-Godenhielm et al., Golden Years of Fabergé, Drawings and Objects from the Wigström Workshop, New York and Paris, 2000, p. 126). Predominantly formed as hardstone blocks, however, few of these examples have the elegance, slim profile or overall quality of materials as seen in the present clock.