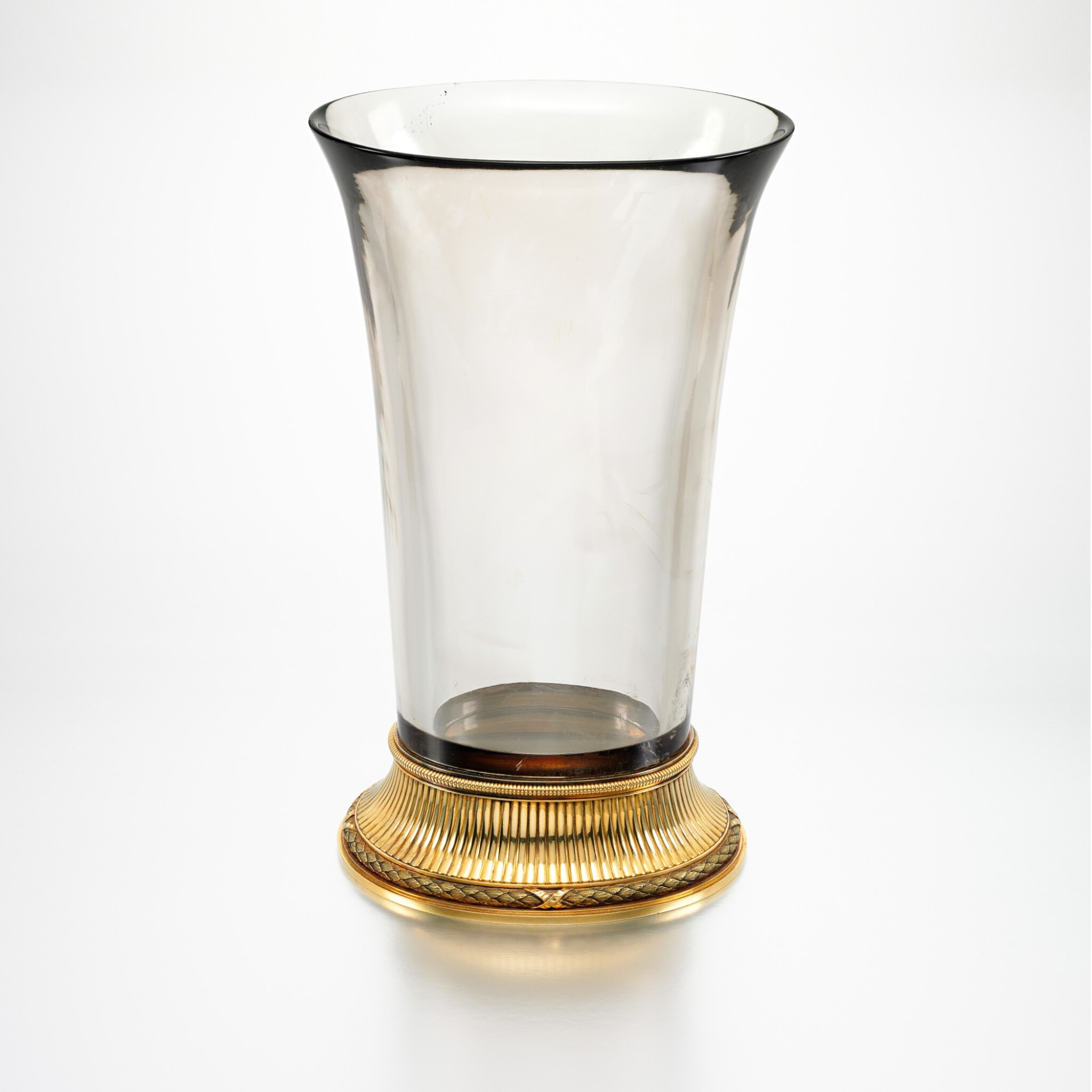 Presented by Grand Duke Alexei Alexandrovich (1850-1908) to Elizabeta Balletta, prima ballerina at the Imperial Mikhailovsky Theatre, St Petersburg, circa 1900
A La Vieille Russie, New York
Helen Babbott Sanders, acquired from the above
The Brooklyn Museum, New York, bequest from the above in 1983

New York, A La Vieille Russie, Inc., The Art of Peter Carl Fabergé:Exhibition for the Benefit of the Scholarship Fund of theManhattan School of Music, October 25 - November 7, 1961

New York, A La Vieille Russie, Inc., The Art of the Goldsmith andJeweler, 1968

New York, A La Vieille Russie, Inc., Fabergé: Exhibition for theBenefit of the Scholarship Fund of the Cooper-Hewitt Museum, the Smithsonian Institution's National Museum of Design, April 22 - May 21, 1983

This large and impressive smoky quartz vase is completely unique in Fabergé’s production and represents the apogee of the firm’s lapidary works. Perfectly carved from a huge piece of smoky quartz and mounted in the highest carat gold, it represents a costly and lavish imperial gift from Grand Duke Alexei Alexandrovich of Russia (1850-1908) to his favourite actress, Elizabeth Balletta. Grand Duke Alexei presented many gifts to Elizabeth Balletta, but the present vase in both its scale and exceptional craftsmanship is undoubtedly the most opulent. Accordingly, in his 1949 publication on the life and works of Peter Carl Fabergé, Henry Bainbridge who was manager of the London Branch of Fabergé describes this vase as ‘Balletta...and her Fabergé smoky rock crystal goblet of surpassing beauty… perhaps the most beautiful thing Fabergé ever made.’ (H. Bainbridge, Peter Carl Fabergé: His Life and works, London, 1949, illustrated plate 6 p. 8). The vase was famous in its own time, so treasured that it travelled with Balletta to Paris and was included in the famous Exhibition of Russian Art held in Belgrave Square, London in 1935 listed as ‘lent by Madame Balletta, Paris’.

Elisabeth Balletta performed at the Imperial Theatre for twenty-five years before settling in Paris with Grand Duke Alexei until his death in November 1908. A few months later, the Sydney Newsletter dated 30 January 1909 reported the death and funeral of The Grand Duke Alexei in Paris:

'…dying in the apartment of a Parisian actress. No one was present at the time of death but a French music hall singer known in Russia by the name of La Ballet[t]a … Alexis found nothing better to do than to come to Paris and display as publicly as possible his affection for La Balletta. La Balletta, who has been amply provided for out of imperial funds, was allowed to accompany the funeral cortege in a closed carriage.'

After the death of Grand Duke Alexei, over 500 paintings and valuable objects from his Paris apartment were sent in eight crates to St. Petersburg. The shipment was insured for 250,000 francs and included works by Fabergé and paintings by Jean-Baptiste Marie Huet (1745-1811), François Boucher (1703-1770) and François Flameng (1856-1923).

Known for his generosity, Grand Duke Alexei lavished gifts upon Elizabeth Balletta and her collection was renowned in its own time. The surpassing quality of her Fabergé and jewels has historically incited great competition in collectors who seek her provenance. Famously, a Fabergé guilloché enamel case from her collection, decorated with intertwined monograms 'EB' and 'A', was first sold to the distinguished collector Lansdell K. Christie, who then auctioned it between 1973-74 for the record sum of 190,000 Swiss francs. After the death of Grand Duke Alexei, it was necessary to pay a Fabergé invoice of 800 roubles for a hardstone figure of a dog Grand Duke Alexei had presented to Elizabeth Balletta, this bulldog was offered by Sotheby Parke-Bernet, New York, lot 405 and is now held in the collection of the Museum of Fine Arts, Boston (1980.649).

This smoky quartz vase is the highlight of a group of Fabergé assembled by Helen Babbott Sanders in the 1950s. Helen Babbott Sanders was the daughter of Frank L. Babbott, who was president of the Board of the Brooklyn Museum from 1920 to 1928 and one of its chief benefactors. Helen Babbott Sanders was a member of the museum’s acquisition committee and collected with an emphasis on excellence, as is reflected in this Fabergé collection and her bequest of Renaissance paintings. The collection is one of the only remaining groups that was built one of the Golden Ages of Fabergé collecting in America. Sanders collected alongside the other great Fabergé collectors of her era, such as Frank Sinatra, Bing Crosbie and Lansdell K. Christie, whose collection formed the basis of the Forbes Collection. The iconic, glamorous and thoughtful way in which this collection was acquired mainly at A La Vieille Russie on 5th Avenue, makes it a rare and exceptional appearance on the market.

The present vase is one of the most unique objects created by Fabergé’s head workmaster Michael Perchin (Mikhail Perkhin), and helps us to truly understand why he was described as a ‘phenomenal, prodigious talent’ (U. Tillander-Godenhielm, Fabergé: His Masters and Artisans, London, 2018, p. 71). The magnificent size of the vase made it a showcase for Perchin to demonstrate both the firm’s lapidary skills and his signature re-invention of Louis XVI style in the opulent solid-gold mount. Perchin was particularly renowned for his historicising designs and innovative use of materials, the perfection of which can be seen in the exuberant yet elegant design of the present vase. Next to his Imperial Eggs, the present vase is one of Perchin’s most impressive expressions of his signature aesthetic. A related Fabergé work, utilising an impressively large piece of smoky quartz to emulate a Renaissance nautilus cup, was bought by Leopold de Rothschild from Fabergé’s London branch on 9 July 1912.

Smoky Quartz from the Urals and 72 Carat Gold

It is extraordinary to consider not only of the size of the smoky quartz crystal required to carve this monumental vase, but also of its nearly-flawless clarity. Fabergé’s lapidary sourced smoky quartz from the Ural mountains, that was known for its high quality and suitability for carving. The firm alone would have access to such a sizable and flawless specimen as that used for the Balletta Vase. Quartz, with its complexity of natural inclusions often caused many breakages and failed, imperfect carving attempts; making the clarity of the 'Balletta vase', with only one subtly glistening inclusion running through the hidden foot, a truly unapparelled lapidary masterpiece. The setting of the 'Balletta vase' in a thick, elegantly chased base of the highest, '72' carat gold emphasises the very high value of the stone being set ('Birbaum Memoirs' in G. von Habsburg, M. Lopato, Fabergé: Imperial Jeweller, Milan, 1993, p. 457).

Fabergé worked with several talented lapidaries, such as the Imperial Peterhof Lapidary works and factories in Idar-Oberstein in Germany, sourcing hardstones for vases, boxes and whimsical models of animals. After 1908, with the arrival of such lapidary artisans P. Kremlev and P. Derbyshev, the firm produced its own works in hardstones.

The scale and quality of the carving of the present vase makes it unique in the oeuvre of Fabergé and amongst the greatest technical and aesthetic achievements of its renowned lapidary and head workmaster Michael Perchin.