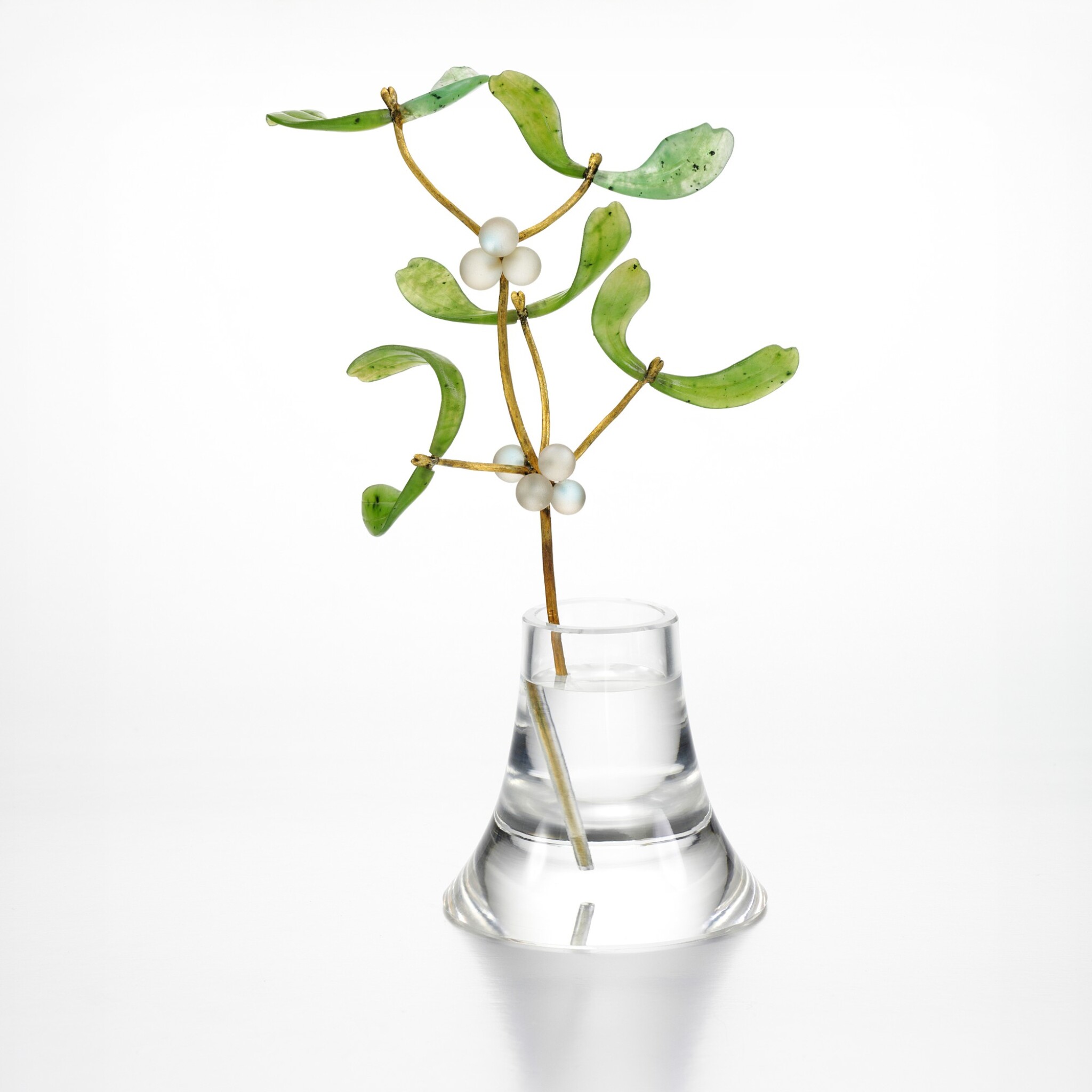 Employing a range of artists across Fabergé’s workshop, from stonecutters to gem-setters, flowers such as the present mistletoe are a lasting testimony to the diversity and ingenuity of the firm and its thoughtful use of precious materials. The present model is apparently the only known extant study of mistletoe, though others are listed, notably a mistletoe in lapis vase purchased by Mrs Leeds. Mistletoe is a rare and exotic plant in Russia, making this particular study even more uncommon.

The process of making these flowers, from the cutting of the vase in rock crystal to the setting of perfectly polished moonstone to create the berries, was a lengthy and thoughtful one. The way in which the berries of the present study hold pearlescent light when viewed from all angles is perfectly balanced by the movement in the carving of its nephrite leaves. The polish and the finely engraved details of these leaves was characteristic of Fabergé’s workshops. Nephrite, with its natural variations in colour was sourced and chosen from massive boulders near Lake Baikal in Siberia and the Sayan Highlands in the Altai Mountains.

Once all the intricate elements of flower studies had been carved, they were assembled in the workshop of Fabergé’s head workmaster Henrik Wigström. The leaves and berries were attached to a naturalistic gold stem using the most delicate pins or by setting them in discrete pockets with a special glue. The stem itself was made to resemble its natural inspiration by using an alloy of gold and copper or silver to give it a reddish or greenish hue, respectively. The gold of the stem was then textured using engraving and embossing tools by the most accurate of craftsmen in the workshop (M. Pfeifer Swezey et. al., Fabergé Flowers, New York, 2004, pp. 71-72).

As this model of mistletoe reflects, simpler, more modern flowers were often favoured by Fabergé’s clientele to elaborate blooms. The present study is an elegant and very chic representation of a mistletoe, fully conceived in three dimensions, captivating from all sides.