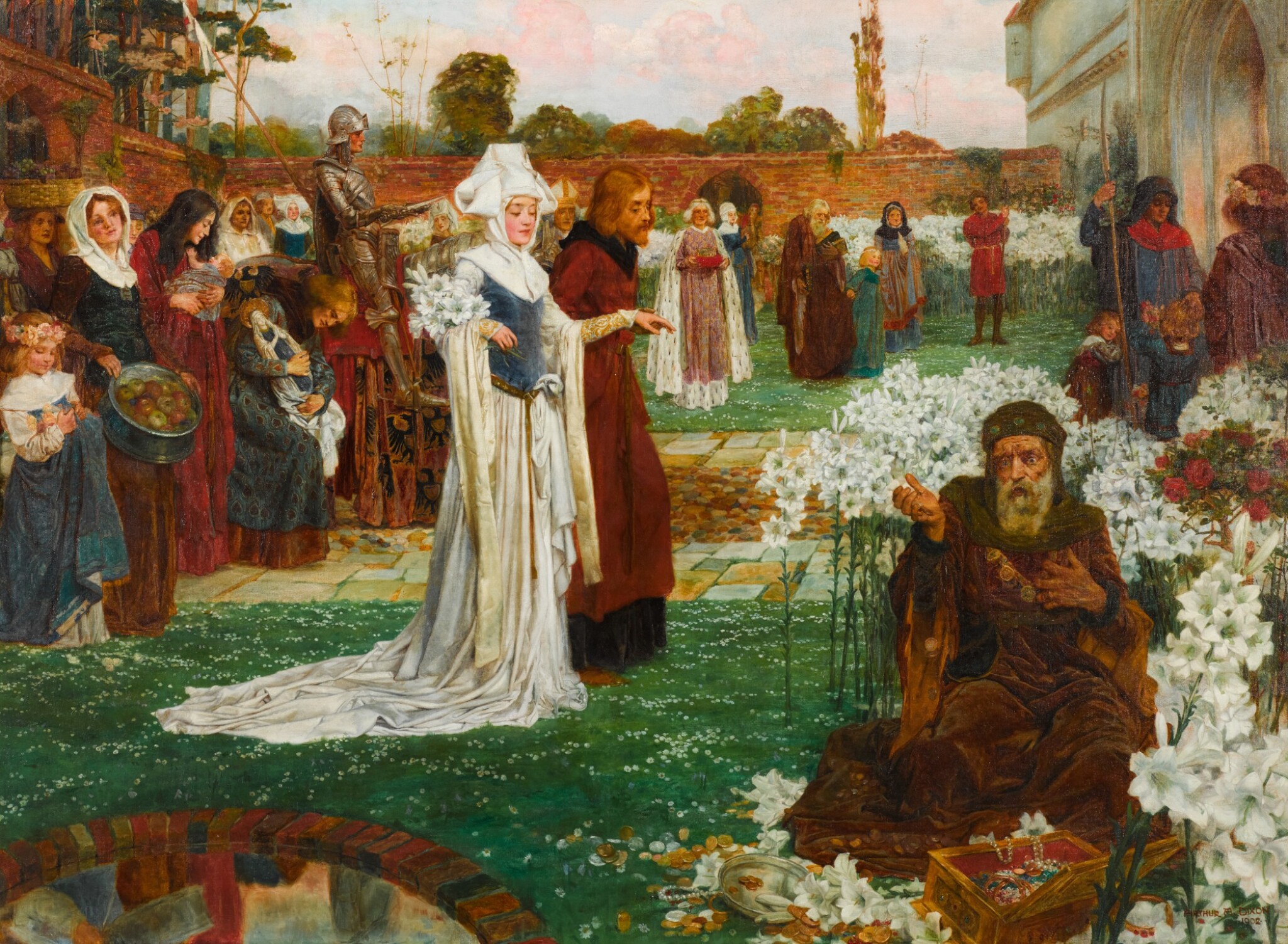 ﻿signed and dated l.r.: ARTHUR A. DIXON /1902; inscribed on an artist’s label on reverse: Bring an Offering and come into His Courts

This picture has been lined and the lining is providing a stable structural support. The paint surface is clean and the picture is ready to hang.

There are small areas of localised retouching - to the scarf of the seated man, the building on the right, a vertical line close to the shoulder of the knight. These retouchings have been well applied and are not excessive.

Arthur Dixon’s New Gallery exhibit of 1903, Offerings was suggested by Psalm 96 of the King James’s version of the Bible; ‘Give unto the LORD, O ye kindreds of the people, give unto the LORD glory and strength/ Give unto the LORD the glory due unto his name: bring an offering, and come into his courts’. Painted in a richly-decorative style derived from Pre-Raphaelite precedents it appears to be an allegory of devotion. The focus of the composition are a King and Queen, their eyes downcast and crowns removed in reverence as they lead a procession from a walled courtyard to the portal of a chapel. A crowd of monks, knights and villagers follow, bearing offerings of religious carvings and agricultural produce. In the foreground a blind pedlar of religious offerings reaches out for charity, surrounded by red roses - the symbol of love- and white lilies - the symbol of purity and recalling the ‘lilies of the field’ from Matthew, verse 28: ‘Consider the lilies of the field, how they grow; they toil not, neither do they spin’. Offerings appears to have been inspired by Frank Dicksee’s The Symbol of 1881 (private collection) which includes a similarly regal couple and an unseeing pedlar of votives.

Arthur Dixon lived in Berkhamsted in Hertfordshire and specialised in paintings of figurative subjects which he exhibited at most of the major venues in London, including the Royal Academy, Royal Society of British Artists, as well as the progressive New Gallery. He also worked as a book illustrator, illustrated numerous volumes during the golden age of commercial book illustration at the turn of the Twentieth Century. His work as an illustrator informed his oil paintings and meant that he was practiced in narrating stories and moods, Offerings being a particularly well-wrought example. Similar examples are The Well (Ramsgate Library) and The Sleeping Minstrel (Worcester Art Gallery and Museum).