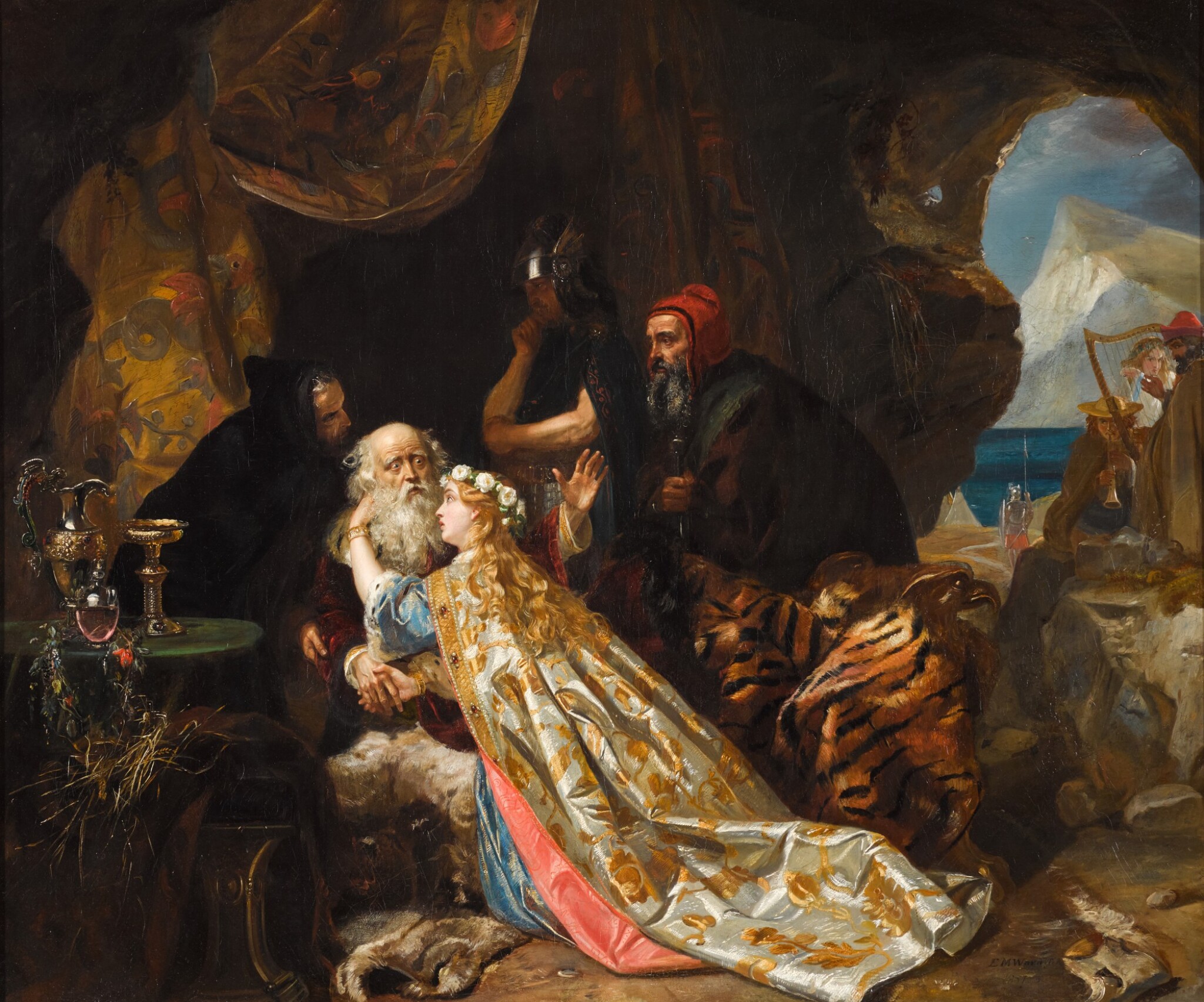 This picture is contained in a box-frame and behind glass which makes inspection of the revetrse difficult. However the painting appears to be lined and the lining is providing a stable structural support. There is a craquelure patterns across the surface but it appears to be stable. The picture is ready to hang.

There are flecked retouchings to infill craquelure and some broader strokes of retouching to the darker areas in the left lower quadrant.

Painted in 1857, Ward’s theatrically conceived picture of King Lear and his dutiful daughter, Cornelia, depicts a moment from Act IV, Scene VII of King Lear. Earlier in the play King Lear learned that his two older daughters, Goneril and Regan, have tricked him into relinquishing his power to them by hollow and insincere professions of love. Disillusioned by their callousness and disgusted by his own foolishness and gullibility, Lear leaves his daughters and wanders into a raging storm, eventually losing his mind. Meanwhile, Cordelia his truly devoted daughter, and now Queen of France, has made camp on the shores of England in search of her father.

In this work, Ward depicts Lear and Cordelia reunited in the French camp. Lear, who is attended by his faithful servant the Earl of Kent, and a physician, awakens from a deep sleep and finds Cordelia at his side. At first, he is incredulous at where he finds himself. He expresses the sentiment that he must have died and entered purgatory and that Cordelia must be an angel. Responding to her attention, Lear recognizes his daughter. He confesses:

I am a very foolish old man… I fear I am not in my perfect mind.

We are not the first Who, with best meaning, have incurred the worst. For thee, oppressed King, am I cast down Myself could else out-frown false fortune’s frown

Ward’s painting epitomizes the mid-nineteenth century trend for narrative literary painting. Ward has included the musicians who waken Lear from his disturbed sleep. They are seen at the far right through an opening in the cave that looks out upon a view of the white cliffs of Dover. To add visual enchantment, Ward has added some props of his own, such as the silver and crystal table setting and the exotic tiger skin throw. In regard to technique, Ward’s highly finished, smooth, and luminous surfaces reflect the academic training he received at the Academy of St/ Luke in Rome, as well as his association with the German Nazarene school of painting (he briefly trained under the accomplished Nazarene painter Peter von Cornelius (1785-1867) in Munich in 1839).

Upon his return to England in 1839, Ward became well known as a painter of historical and literary anecdote. He became an associate of the Royal Academy in 1846 and a full academician in 1855. The pinnacle of Ward’s illustrious career came in 1853 when he received the commission for a series of paintings for the corridors of the House of Commons. His other Shakespearean inspired works include scenes form Henry VI, Romeo and Juliet, and Much Ado About Nothing.