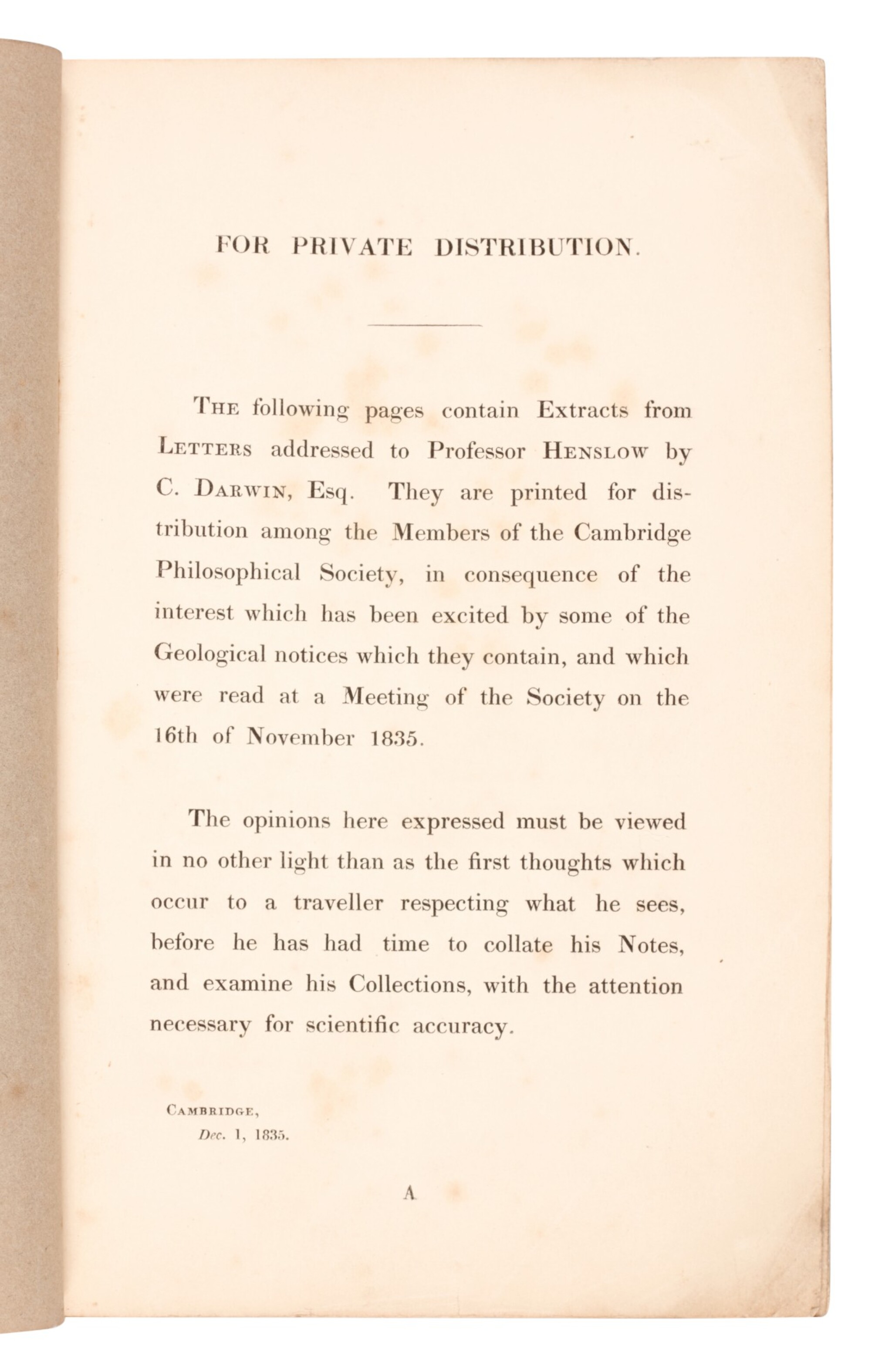 A LEGENDARY RARITY IN EXCEPTIONAL CONDITION: DARWIN'S FIRST ACCOUNT IN PRINT OF HIS DISCOVERIES ON THE BEAGLE.

During his years on the Beagle Darwin wrote regularly to the Rev. Professor John Stevens Henslow (1796-1861), Cambridge Professor of Botany. As an undergraduate, Darwin had been a favourite student of Henslow: it was the conversation at Henslow's Friday soirées that inspired Darwin to pursue natural history, and the young man excelled in Henslow's field classes, spending enjoyable days searching for specimens in the countryside around Cambridge. It was Henslow who encouraged Darwin to learn geology from the great Adam Sedgwick, and it was Henslow who recommended Darwin to Captain FitzRoy of the Beagle. Darwin's letters to Henslow from the Beagle more than repaid Henslow's belief in Darwin's abilities; they are full of botanical and geological observations and discoveries including unrecorded specimens and tantalising fossils, conveying his enthusiasm and excitement in pellucid prose. When Henslow read excerpts from these letters at a meeting of the Cambridge Philosophical Society on 16 November 1835, they generated so much excitement that Henslow decided to reproduce them in a pamphlet for circulation with the Society. Darwin was, of course, still on the Beagle - then in New Zealand - so could not be consulted about the publication.

The first Darwin knew of the publication of the Extracts from Letters was in family correspondence. His sister Caroline wrote to him on 29 December 1835:

"...you must now hear how your fame is spreading — a note came to my Father on Xmas day from Profr. Henslow speaking most kindly of you & rejoicing you would soon return “to reap the reward of your perseverance and take your position among the first Naturalist of the day” and with the note he sent my Father some copies of extracts from your letters to him printed for Private distribution ... My Father did not move from his seat till he had read every word of your book & he was very much gratified— he liked so much the simple clear way you gave your information. Your frank unhacknied mode of writing was to him particularly agreeable..."

News of the publication did not reach Darwin until he arrived at the Cape of Good Hope at the beginning of June 1836. Not for the last time, Darwin's immediate response to the thought of publication was to be "a good deal horrified", and to worry that "I have always written to Henslow in the same careless manner as to you; & to print what has been written without care & accuracy, is indeed playing with edge tools. But as the Spaniard says, 'No hay remedio'" (letter to Catherine Darwin, 3 June 1836). He would surely have been reassured when he finally saw a copy of the pamphlet after his return to England in October of the same year, as Henslow's preface cautiously emphasises that the letters were "the first thoughts which occur to a traveller respecting what he sees, before he has had time to collate his Notes, and examine his Collections, with the attention necessary for scientific accuracy." Certainly the publication did no harm to his relationship with Henslow, who remained a lifelong friend.