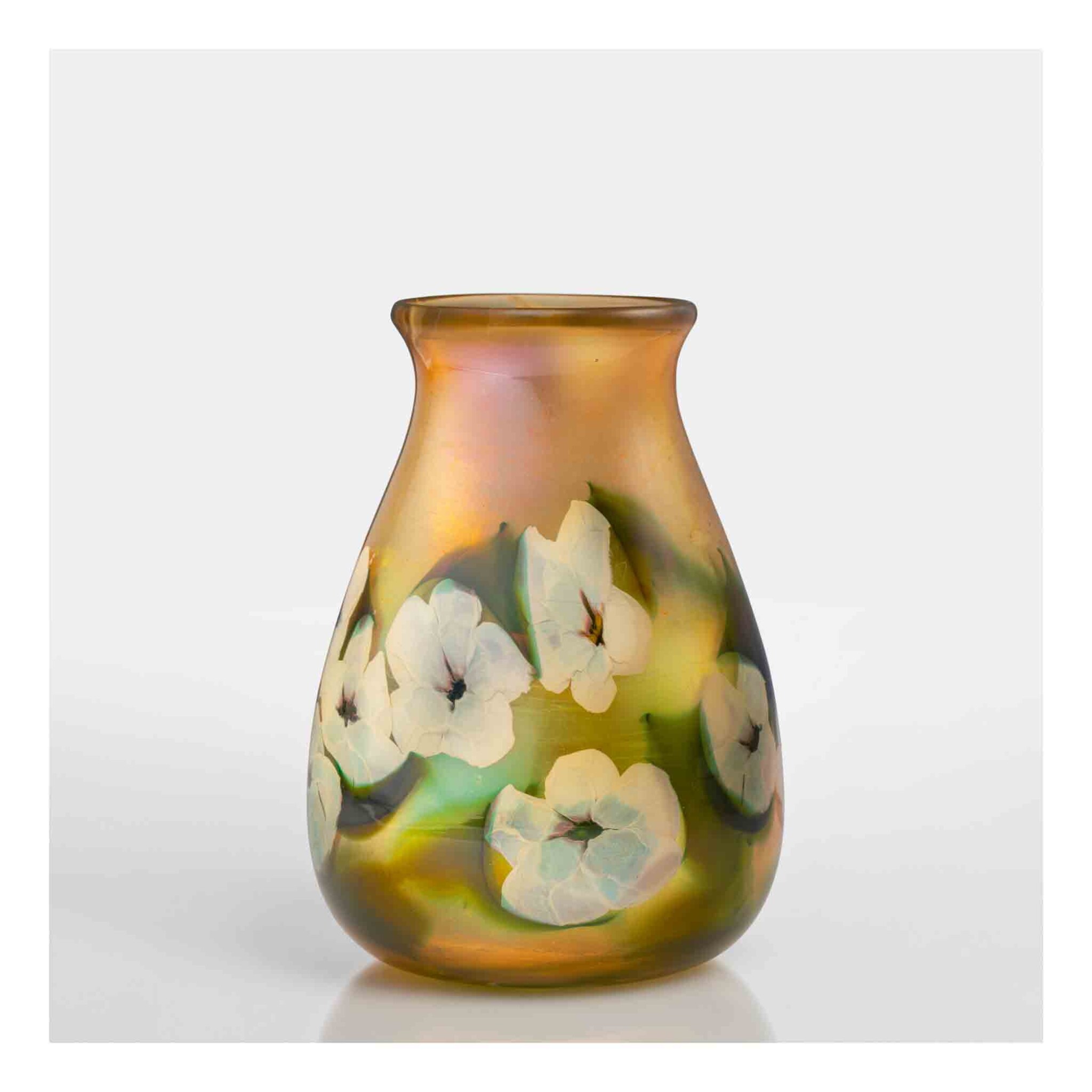 Overall in very good condition. This vase was awarded a prestigious gold medal when it was exhibited in the 1910 Paris Salon. It went on to enter the collection of Arthur Nash, the superintendent of Tiffany’s glasshouse, and then descended to his son, Leslie H. Nash, who also worked for the firm. When viewed firsthand the vase displays a warm pale yellow ground with beautiful iridescence. The creamy white morning glory blossoms are masterfully articulated to convey a sense of depth and the softness of the petals and are accented by forest and olive green leaves. The glass with scattered minor air bubbles, particulate inclusions and surface irregularities inherent in the making and not visually distracting. The glass surface with some occasional minor surface scratches consistent with age and gentle handling. The interior of the vase with some minor surface soiling and possible minor traces of calcification, not visually distracting. A stunning early iteration of the treasured “Morning Glory” motif with illustrious provenance.

﻿﻿﻿﻿﻿﻿﻿﻿﻿In response to your inquiry, we are pleased to provide you with a general report of the condition of the property described above. Since we are not professional conservators or restorers, we urge you to consult with a restorer or conservator of your choice who will be better able to provide a detailed, professional report. Prospective buyers should inspect each lot to satisfy themselves as to condition and must understand that any statement made by Sotheby's is merely a subjective qualified opinion.

Collection of Arthur J. and Leslie H. Nash
Sotheby's New York, November 19, 1983, lot 712
Private Collection
Thence by descent to the present owner
Martin Eidelberg and Nancy A. McClelland, Behind the Scenes of Tiffany Glassmaking: The Nash Notebooks, New York, 2001, pp. 84 (for the present lot illustrated) and 224 (for a watercolor rendering of the present lot in Leslie H. Nash’s personal scrapbook)
Paris Salon, 1910
Tiffany Furnaces, Louis Tiffany’s glasshouse in Corona, New York, never intentionally manufactured paperweights in the traditional sense, whereby designs composed of either flameworked elements or sliced canes of millefiori were arranged within a hemispherical dome of solid transparent glass. Around 1900, however, his glassworkers developed, and gradually perfected, a type of vase that is today referred to as “paperweight technique.” It proved to be an ideal method of expressing Tiffany’s love of flowers in a revolutionary new glass. This glass was developed in 1893 by Arthur J. Nash (1849-1934), the glasshouse’s superintendent, and was soon famous around the world by its trademarked name: “Favrile.”

The initial attempts at creating paperweight vases resulted in relatively simple floral designs, with many of them including production flaws due to the complexity of the technique. A gather of clear glass at the end of a blowpipe was rolled over thin sections of solid glass or millefiori carefully arranged on the marver. The inlaid marvered design expanded as the glassblower enlarged the gather and then the entire vase was covered with a layer of transparent glass that encased the decoration. The final step was to place the object into a reduction oven where fumes of metallic salts were introduced, forming a gold or orange-gold iridescence on the interior surface.

The vase offered here fully displays the extraordinary skills of Tiffany’s glassworkers. An unusual variety of morning glory, known as “Pearly Gates” and noteworthy for its fragrant blossoms that open on warm summer evenings and last throughout the night, are almost three-dimensional as the five petals of each flower are layered and of varying opacity. The sense of depth is amplified by the creation of the flowers’ throats with their tan borders shading to dark green and brown. The blossoms and the umber-streaked green foliage are beautifully presented against a heavy orange-tinted gold iridescence on the inside of the vase.

This vase’s provenance is almost as impressive as the piece itself. Produced around 1907, it was apparently displayed in one of the Paris Salons where, according to the inscription on the base, it was awarded a prestigious gold medal. It entered the personal collection of Arthur J. Nash and descended through his family. Leslie H. Nash (1884-1958), Arthur’s younger son who worked with his father at Tiffany Furnaces beginning in 1908, was especially proud to own the piece. He wrote his name on the bottom in bold red nail polish and also created an ink and water color sketch of it in a notebook he maintained of the company’s production. Alongside the drawing, Leslie notes that the vase was comprised of 7 different glasses and that the “perfect price” was $500, an incredible sum considering that the average worker’s annual salary in 1910 was only $750. He also included that it was the “only piece of its kind,” likely because the intricacy of the design and the time it took to complete made it economically unfeasible to fashion additional examples. This vase superbly illustrates the amazing skills of Tiffany’s artisans, who were among the best in the world, and its importance as a work of art is significantly enhanced by its storied history.