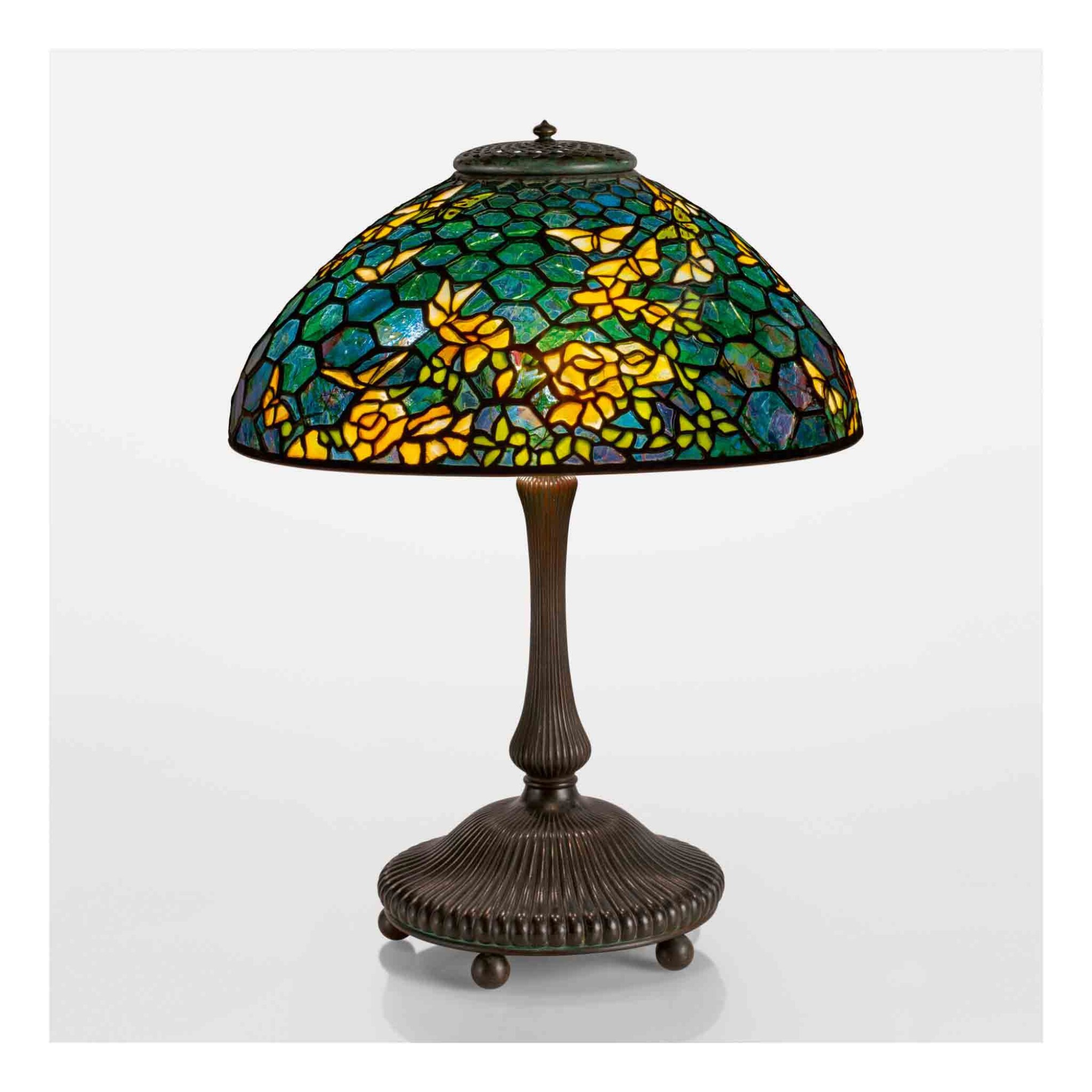 Overall in very good condition. The shade displays a rich blue and green palette which offsets the vibrant yellows of the butterflies and rose blossoms. Some of the butterflies are articulated in decorated iridized and “Cypriote” glass, which contributes to the texture and nuance of the butterfly wings. When seen with reflected light these glass passages are particularly attractive, displaying strong luminous color; when seen with transmitted light this glass shows wonderful nuance and tortoise-shell mottling which enhances the effect of the butterfly wings. The background glass is comprised entirely of confetti glass with emerald green stringing. The confetti glass displays a rich variety of transparent deep ocean blue and aqua tones with accents of indigo and aubergine. The shade overall presents with greater richness and variety when viewed firsthand compared to the printed catalogue illustration. The shade with approximately 24 hairline cracks dispersed throughout, stable and consistent with age, as is typical for a shade comprised largely of confetti glass. Three tiles have been sensitively stabilized by a professional Tiffany conservator. The shade with some minor traces of surface soiling concentrated to the contours adjacent to the leadlines, consistent with age. The base is in overall very good condition with scattered minor surface scratches, abrasions and light wear to the patina, consistent with age and handling. The base with some traces of surface soiling concentrated to the recessed contours of the design. The base wheel appears to be a later reproduction. With period sockets and paddle switches. With a period finial in very good condition with minor wear and oxidation consistent with age. The threaded pin which secures the finial to the base is slightly too short and does not catch in the base; this element could be easily replaced. A rare and elaborate shade with a stunning glass selection and rich coloration.

﻿﻿﻿﻿﻿﻿﻿﻿﻿﻿In response to your inquiry, we are pleased to provide you with a general report of the condition of the property described above. Since we are not professional conservators or restorers, we urge you to consult with a restorer or conservator of your choice who will be better able to provide a detailed, professional report. Prospective buyers should inspect each lot to satisfy themselves as to condition and must understand that any statement made by Sotheby's is merely a subjective qualified opinion.

Macklowe Gallery, New York, 1989
Alastair Duncan, Tiffany At Auction, New York, 1981, pp. 64 and 97 (for the shade)
Alastair Duncan, Tiffany Lamps and Metalware, Woodbridge, Suffolk, 2007, p. 143 (for the shade)
Louis Tiffany’s affinity for nature also extended to insects. The first significant commission for his innovative interior decorating firm, Louis C. Tiffany and Associated Artists, was a drop-curtain for the newly constructed Madison Square Theater in 1880. That curtain, which attracted national attention, featured butterflies flitting through a tropical Florida landscape. It was even reported that Tiffany visited butterfly dealers to examine specimens in order to get ideas for new color combinations. Therefore, it is not surprising that butterflies were featured in several of Tiffany’s subsequent designs, perhaps none as magnificent as the extraordinary “Butterfly” leaded glass window made circa 1885 for his 72nd Street mansion in New York City and currently in the permanent collection of the Charles Hosmer Morse Museum of American Art (Winter Park, FL).

Some of the earliest lamps made by his later firm, the Tiffany Glass and Decorating Company, included blown Favrile glass shades with delicately engraved small butterflies. Clara Driscoll, the head of Tiffany’s Women’s Glass Cutting Department, designed in 1898, with the probable assistance of Alice Gouvy, one of the so-called “Tiffany Girls,” the first leaded glass model featuring butterflies. Although Driscoll should be credited with the concept, Louis Tiffany approved it and also made artistic suggestions before the lamp went into production.

That initial leaded example featured an ornate mosaic kerosene base depicting yellow primroses, and the base and shade as a unit was priced by the company at $500 in 1906. Wanting to appeal to a broader market and also a shade that could be used on an electrified base, the company developed model number 1465. It was listed in the 1906 Tiffany Studios price guide as “16 inch Yellow Rose and Butterfly, honeycomb, dome $80,” with a base of the customer’s choosing being sold separately.

What this shade does have in common with its larger companion model is an exceptional pallet of opalescent glass, in this example various shades of yellow, that superbly emulates the subtle, as well as the colorful, beauty of a butterfly. The highly unusual incorporation of iridescent, and slightly pock-marked, Cypriote glass in creating some of the butterflies allows the shade to be as beautiful when unlit, with the light reflecting off the soft gold iridescence, as it is when the lamp is turned on and the Cypriote sections enchantingly convert to a translucent yellow with tortoise-shell mottling.

The numerous blossoming roses, fluttering butterflies and light green trailing leafage are all against an extraordinary background. Composed of transparent blue-tinted glass, much of it is of the striking “confetti” variety featuring small embedded shards of red, peach and violet glass. Even more noteworthy are the numerous sections of the background that are imbued with bright green irregular threading, a type of glass usually reserved for Tiffany’s most important leaded glass windows.

The shade is combined with a wonderful base, model 370, which was described by the company in 1906 as “mushroom design” and seven years later as “ribbed.” The patinated bronze base, raised on five ball feet, is an excellent complement to the shade, with its gently domed lower section, and the finely cast ribbing enhances the shade’s honeycomb pattern.

The Yellow Rose and Butterfly shade is exceptionally rare, with its production ending prior to 1913. This is perhaps the finest and most visually appealing example of the model ever offered. It brilliantly represents, on many levels, the supreme heights of artistry and craftsmanship that brought Louis Comfort Tiffany and his Tiffany Studios international recognition and fame that continues even to this day.