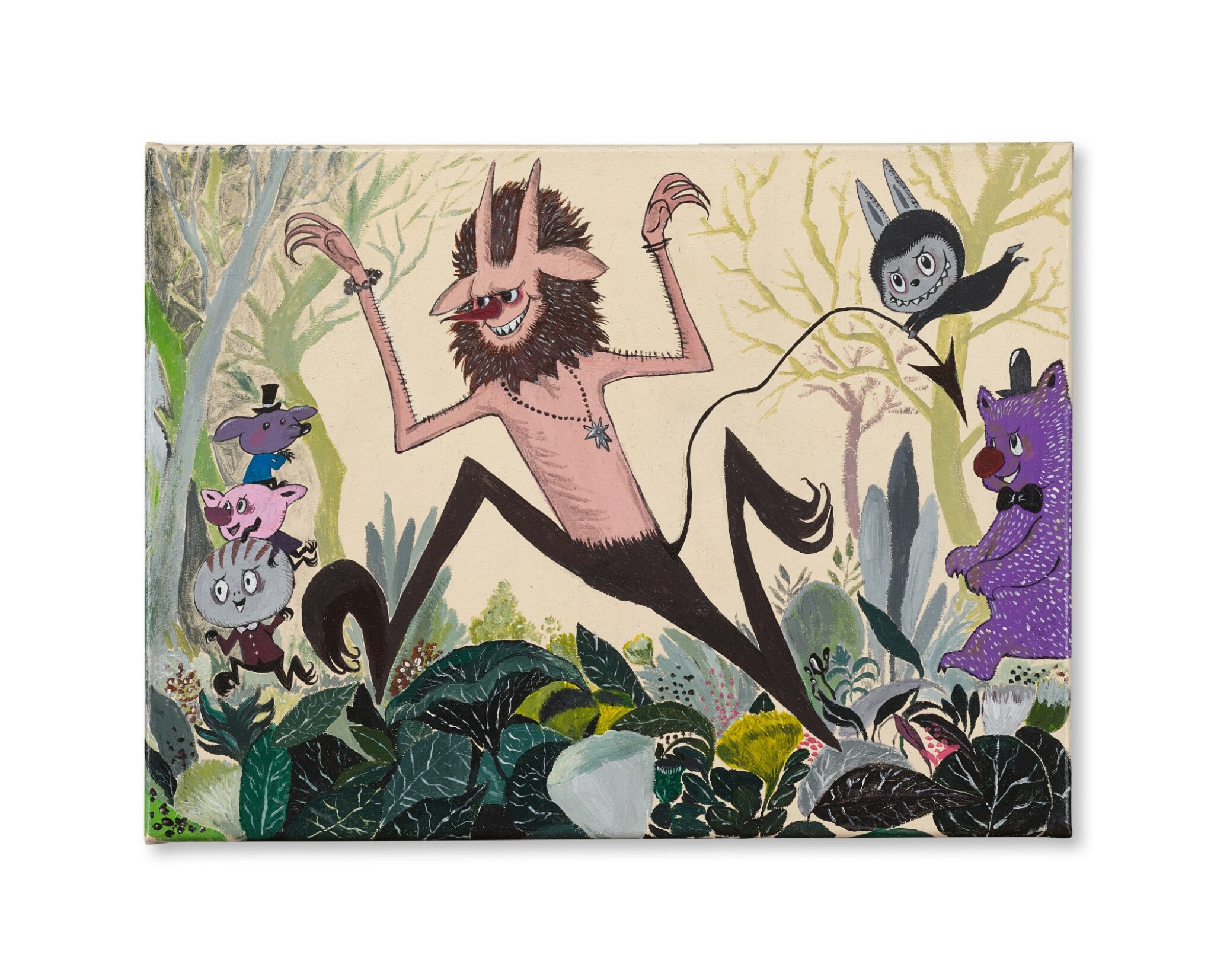 signed on the label affixed to the backing board

This work is in excellent condition. Visible upon close inspection are occasional fibrous accretion and paint debris that appear to be from the time of creation. No restoration apparent when examined under ultraviolet light. Framed.

Gallery by the Harbour, Hong Kong

Born in Hong Kong, celebrated artist Kasing Lung moved to the Netherlands with his family as a child. Having grown up in Europe whereby fairytales and folklores are deeply rooted in people's culture, Kasing quickly developed a profound interest in the fantastical and began creating his very own magical realm since 2015. Now a renowned illustrator, Kasing gave life to countless characters under his pen and brush. Amongst them, the bunny-eared Labubu is the most well-known and makes recurring appearances in the artist's extensive oeuvre.

In From the Heart, the mischievous Labubu grabs and hangs on the tail of púca, a creature derived from Celtic folklore that brings both good and bad fortune, as they sprint through the woods with their enchanted friends. The present work was exhibited in the artist's first solo exhibition De Kleuren MONSTERS in Hong Kong in 2017. While it can be appreciated as an individual piece of artwork, it can also be considered as part of a bigger composition, combining with the other 19 exhibited works that feature a total of over a hundred mythical creatures that the artist created, which over 20 of them are named individuals. Kasing through his captivating characters seeks to convey the wish of national harmony. Should one take a closer look at the characters, many of them wear costumes of different nationalities from different historical periods. He also thinks that people nowadays live in an era filled with pressure which leads to unhappiness and frustration. Therefore, it is his ardent wish that his works can chime the viewer's childhood memories and bring out their innocence and hope from the depths of their heart and soul.

The artist's popularity has rocketed in recent years. At the beginning of this year, Kasing held his first solo exhibition This Is What It Feels Like at Hidari Zingaro, a gallery in Tokyo under the care of one of the giants in the contemporary art scene, Takashi Murakami.