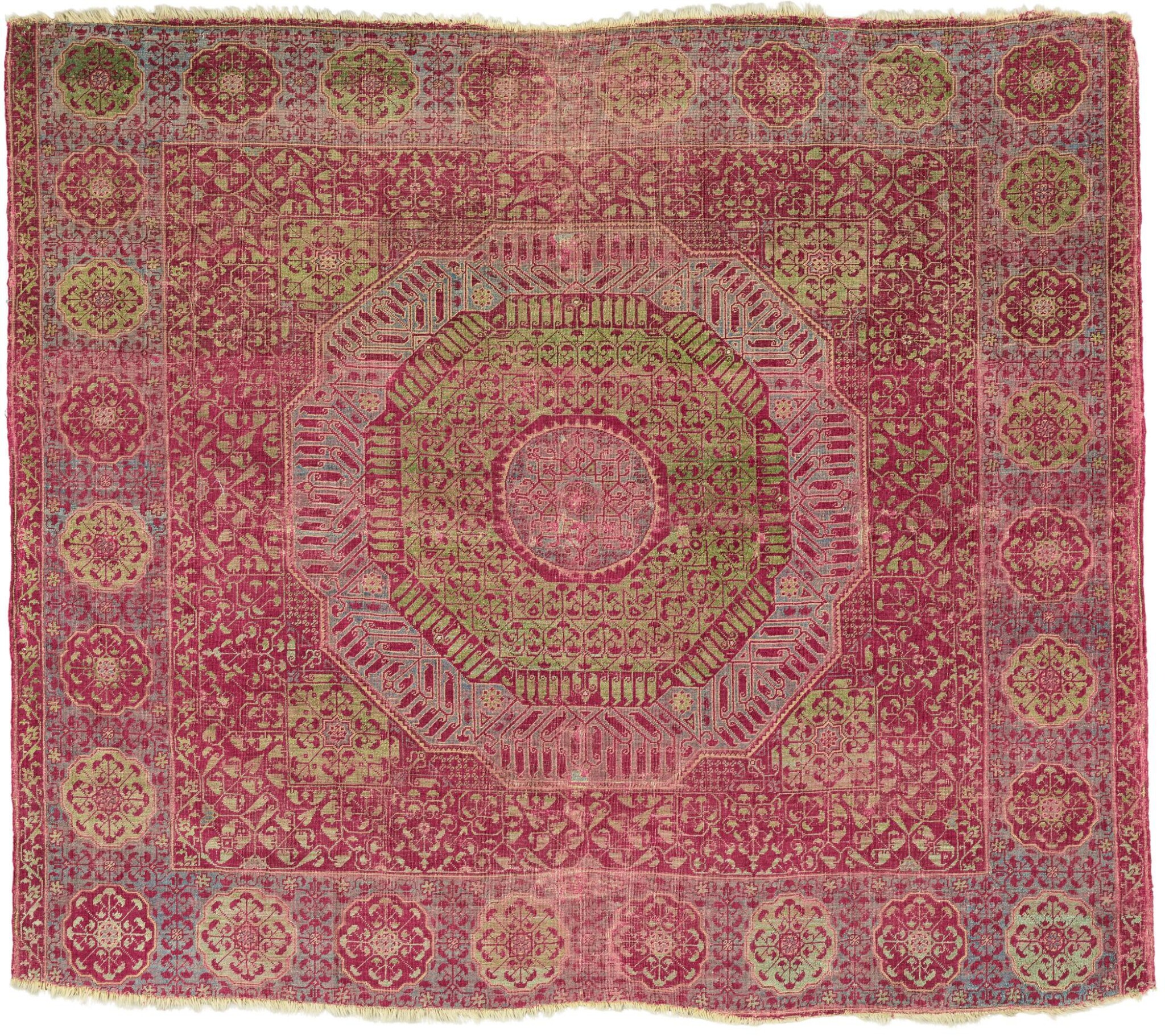 Pile fair, evenly low overall with knot bars and weft shoots visible. Missing guard stripes at top and bottom. Ends and sides all secured with cotton tape. Small reweave in centre of medallion. A number of scattered very small localised areas with repiling/repairs. Some repiling in the green ground cartouches in lower border, most noticeable in the lower right cartouche as the green is a slightly lighter minty green. Overall, in very good condition for age, design still very legible.

Schottenkirche (Scots Church), Regensburg, from where purchased in the early 20th century by

Georg Hirth, Munich, from whom purchased circa 1948 by

Private Collection, Germany, from whom purchased by the present owner in 1999

A rare square Mamluk rug, uniquely for this format with a lobed and octagon medallion and roundel border.

The Mamluk dynasty ruled from 1250 to 1517; at its height their empire reached from Egypt to south east Anatolia and the Hijaz in modern day Saudi Arabia, incorporating Syria, Palestine and parts of Libya and Sudan. During the reign of Qait Bay [r.1468-96] - the period to which the earliest Mamluk style carpets are presumed to date - the arts and architecture were revived and flourished, and an ambitious programme of building was instituted throughout the empire. Demonstrating a sophisticated and cohesive aesthetic, the carpets of Mamluk Egypt, with their mastery of complex geometric patterns and disciplined use of colour include some of the most magnificent early carpets to have survived to the present day.

Mamluk carpet production was clearly highly sought after by contemporary European collectors, with Italy being the main market for these carpets, with the import and distribution centred on Venice and Genoa. Two carpets discovered in Italy by Boralevi are critical for our knowledge of the time frame during which they were made and traded; although carpet weaving must have existed in Egypt prior to the mid 15th century, the earliest production of carpets in the Mamluk style is assigned to the reign of Qait Bay on the basis of the fragmented carpet from the Bardini Collection (inv. Nos. 526-542) decorated with his Blazon, (a further fragment of which is in the Textile Museum, Washington D.C). (See Grube, E.J. ‘Infinity made Visible, Hali, Issue 108, January-February 2000, pp. 82 -83; Boralevi, U., Oriental Geometries, Stefano Bardini and the Antique Carpet, Florence, 1999, no.1, pp.24-27). The ‘Medici’ carpet, discovered in 1983 by Alberto Boralevi in the Pitti Palace, Florence, Inv. no. 5729 is the largest of all known Mamluk carpets and entered the Palazzo Vecchio in 1567, see Boralevi, A., ‘The Cairene Carpets of the Medici’, Hali, Vol.5, No.3, Autumn 1983, pp. 282-3. After the Ottomans conquered the Mamluk Sultanate in 1517, the workshops began producing rugs and carpets for the Court in Istanbul and also continued to produce pieces for the European market. The range of colours used (ranging from three to seven) has been taken, at different times, to represent either earlier or later production, although price, patron, workshop and market could also have been contributing factors to the complexity of the final product.

Albeit of small size, this piece encapsulates the typical chatoyant characteristic of Mamluk weavings, with its complex kaleidoscopic design and carefully manipulated palette. The piece offered here uses six main colours, the ubiquitous lac red, green and blue (abrashed to a lighter turquoise), a dark golden yellow, brownish black and small amounts of ivory. Consistent with the group, the wool is S-spun (this is possibly a technique adopted from the Egyptian tradition of linen spinning, also S-spun). The pile is winder plied and with an asymmetric knot open to the left, executed in the glossy wool associated with these weavings. Warps are S spun, 4 or 5 winder plied in golden yellow & ivory wool, wefted with 3 shoots of madder wool.

The design of the smaller Mamluk rugs and carpets is made up of several primary elements with four principal medallion types, each inhabiting a square: an Eight-Pointed Star, an Octagon Medallion (the redacted central form of the Star medallion), a cusped or Lobed Medallion (some with secondary internal octagon as here), and the rare ’Medici’ medallion, with spokes, seen on the carpet in the Pitti Palace cited above. The larger carpets with groups of three or five medallions use variations of the themes. The proportions of the carpets are adjusted by transverse bands of motifs above and below the medallions, varying in depth, and very occasionally, by additional vertical bands at the edges of the field. Smaller medallions and geometric and stylised plant forms fill the field. Borders are consistently regular with resolved corners. The great majority of smaller pieces, that is the rugs and small carpets, are longer than they are wide, with additional transverse bands of decoration at the head and foot of the field. The small square carpets without these additional bands, as seen in the present example, form a very small subset of the known corpus of Mamluk weavings. Those with the eight-pointed star include the Baillet-Latour, sold Christies, 8 April 2014, lot 20; that in the Boston Museum for Fine Arts, Inv. No. 61.939 (https://collections.mfa.org/objects/115331/carpet?ctx=099bf4e5-71eb-485c-95b3-87ab7370df88&idx=0); the larger MAK example, Inv. no. T8345 (https://sammlung.mak.at/en/collection_online?id=collect-98337) and the ‘Sarre-Lefevre’ rug, sold Lefevre, 23 May, 1980. Examples with the Octagon Medallion include Inv. No. T8346 in the MAK (https://sammlung.mak.at/en/collection_online?id=collect-98338); the piece formerly in the Lees Williams Collection, Inv. No. 55-65-7 (http://www.azerbaijanrugs.com/mamluk/joseph_lees_williams_philadelphia_museum_of_art_55-65-7.htm), in the Philadelphia Museum of Art and the rug in the Metropolitan Museum of Art New York, formerly in the collection of George Blumenthal, Inv. no. 41.190.262 (https://www.metmuseum.org/art/collection/search/450467).

The present lot appears to be the only square carpet with a lobed medallion. There are two small carpets with lobed medallions and transverse bands which relate: the Graf Moy/ Shurmann/ Bruschettini rug (Toby Falk (ed.), Treasures of Islam, exhibition catalogue, Geneva, 1985, no.334, pp.322-333) and a very damaged (possibly now lost) rug sold in the 1932 Benguiat sale, lot 590. (See Image Ref. 129 at https://www.rugtracker.com/2018/03/club-medthe-geometric-gardens.html ) Further, the carpet has inner guards only on the side borders, which slightly widen the field. One can imagine that complete with its end guard stripes and fringing it would have presented a perfect square. The central roundel within the lobed medallion has a corona of yellow flame-like projections, heightened by an octagon of open red field and probably derived from the cusped medallions with flame edges seen in the Bardini carpet noted above; they also appear in the Cassirer Mamluk rug, see Hali, Issue 123, July-August 2002, p. 27, again with a red aureole. The sense that there is a red ground on which the motifs are disposed, so apparent in the Bardini carpet, is still implicit in the present lot, and may suggest a relatively early date of production. The leaf like forms which are ranged at the perimeter of the inner lobed medallion unusually are executed in green, red being almost ubiquitous; the large Mamluk in the Rijksmuseum, Inv. no. 14545, (Image Ref. 152, https://www.rugtracker.com/2018/03/club-medthe-geometric-gardens.html) has a similar arrangement. The guard stripe of a running vine with palmettes appears in a number of examples, for example as inner guard on the Endre Unger rug, sold Sothebys 10 December 1992, lot 67; the guards of the Minutoli Berlin Mamluk rug with lobed medallion, Berlin Inv. No. 3479 and the piece also once in the Hirth Collection,and later with Schürmann, now in the David Collection, Copenhagen, Inv. no. 1/1987.( https://www.davidmus.dk/en/collections/islamic/materials/textiles/art/1-1987)

The yellow ground guards of the magnificent Hapsburg silk carpet in Vienna, Inv. no. T8332 (https://sammlung.mak.at/en/collection_online?id=collect-98327) also have this pattern. As a group, the cusped medallion rugs show a good variety of borders, which are often made up of small repeating pattern units. The border design seen here of repeating lobed roundels, without cartouches, is apparently unique to surviving Mamluk rugs. The cartouche and roundel border is found on a number of pieces, usually with the central box orientated as a square not diamond. For similar roundels with diamonds and with cartouches, see The Mounsey carpet in the Victoria and Albert Museum, Inv. no. T.26-1943 (http://collections.vam.ac.uk/item/O100822/the-mounsey-carpet-carpet-unknown/)