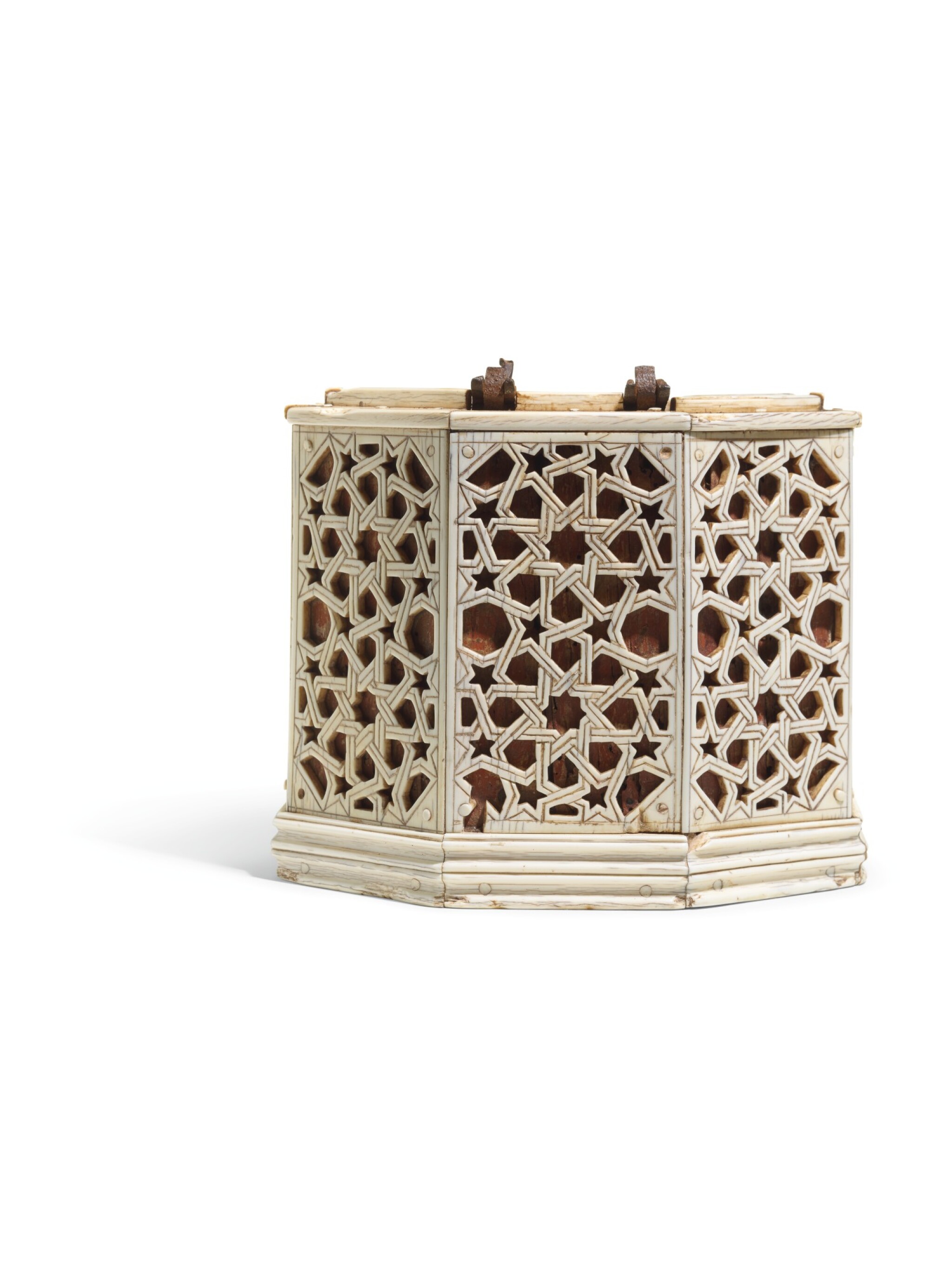 The wood interior painted red with remnants of old woodworm, the ivory plaques with some hairline cracks, one with small break, some discoloration to the panel which would have had lock plate, further small nicks to extremities, as viewed.

"This lot contains ivory. Due to recent changes in the laws of many countries (e.g. US, France) Sotheby's recommends that buyers check with their own government regarding any importation requirements prior to placing a bid. For example, US regulations restrict the import of elephant ivory and prohibit the import of African elephant ivory. Please note that Sotheby's will not assist buyers with CITES licence applications where a buyer elects to either collect or arrange their own shipping, nor will Sotheby's assist with the international movement of ivory by air, either as freight or through hand carry. Sotheby's shipping will only assist in shipping the lot to either domestic UK or EU destinations, where delivery is made by road transport. A buyer's inability to export or import these lots cannot justify a delay in payment or sale cancellation. "

The carved ivory caskets produced under the Umayyad caliphate in al-Andalus, and in some of the petty principalities that succeeded it, are justly celebrated for the balanced exuberance of their decoration, their technical virtuosity, and their richly informative inscriptions, many of which linked them to the ruling elite. Although they were produced over little more than a century, they have eclipsed the ivory caskets produced in al-Andalus over the following three centuries. This unusual and handsome casket, which can be attributed to the fourteenth century, is evidence that the craftsmen of Nasrid al-Andalus could also produce ivory caskets of great artistic sensibility and skill.

There are several explanations why the later caskets are relatively little-known. One is that they do not form a homogeneous group, but divide into at least six stylistic and technical categories, seemingly produced in differing workshops; and our understanding of the development of these different groups is still poor, partly because only one group includes any documentary inscriptions. We can better appreciate the rarity of this casket by seeing it in the context of the other categories.

A few caskets used relief carving technically related to the Caliphal tradition, though the carving was restricted to borders with the mainfields of the casket left plain (Galán y Galindo 2005, vol.II, pp.91-95). Another category was what we can call the 'laminate group', which, like the so-called Siculo-Norman caskets, used thin sheets of ivory pinned to a wooden matrix. The sheets were too thin for relief carving and their decoration was usually painted (see, for example, New York 1992, cat.50).

Another, rarer type used thicker sheets that were inset with large roundels of a black wood which were in turn filled with large-scale human and animal figures. The figures may have been painted, and occasional details lightly engraved, but the overall effect was a striking reverse silhouette. (Ferrandis 1940, vol.II, cat.161-63, pls LXXXI–LXXXIII; Monneret de Villard 1938; New York 1992, cat.51).

A third type consists primarily of circular pyxides, with the ground of the main body in openwork, with small-scale geometrical fretwork. Several examples have extended inscriptions around the lid and base, with the cursive script outlined against a black ground. This is the only group to include a documentary inscription, but, as it is a dedication to the Mamluk sultan al-Malik al-Salih Salah. al-Din Salih (r.1351-54), there is a lively debate on their origin – were they all Mamluk, all Nasrid, or a mixture of the two (New York 1992, cat.52; Galan y Galindo 2005, vol.II, pp.154-67; Carboni 2005; Rosser-Owen 2010, pp.63-64).

A fourth group consists of polygonal caskets that can be dated from the late twelfth to the fifteenth century, and is most readily characterised by its use of a micro-mosaic technique known in Spain today as taracea. The earliest examples, including one sold in these rooms, 10 June 2020, lot 87, were octagonal and have large openwork ivory panels decorated with a repeat pattern of stars and octagons, framed between bands of taracea on the lid and the lower part of the body. Marquetry using larger sections of contrasting wood was also used on several examples. This range of techniques allowed for considerable variety over the course of several centuries (Raby 2020; Silva Santa Cruz 2015).

The present casket has features that link it to the earliest of the taracea group: it is octagonal with openwork geometrical ivory sides. However, the geometry is more complex, the carving more generous and accomplished, and, with a complex ‘moulding’ creating as it were a pedestal base, it encapsulates an architectural spirit quite different from any other known Andalusi casket.

This architectural evocation is created by several features. One is the geometric design, which is a repeated octagonal star interlace that is a simple version of many of the interlace patterns used on Nasrid architecture, especially tiled dadoes and wooden ceilings. It became such a fundamental element in Mudejar ceilings that it was the first design element illustrated in the relevant section of the architectural treatise by the Carmelite friar and architect Fray Andrés de San Miguel (1577-1644), where he calls the octagonal design a lazo de ocho, the central octagon the signo, the outer hexagons and pentagons zafates and candilejos, respectively (de Nuere 1990, p.87). In a Nasrid context it occurs in the Alhambra, on the south wall of the fourteenth-century Salon de Comares, the principal reception hall often referred to as the Hall of the Ambassadors, though the interlace on the dado creates a more irregular polygon than the candilejo on the casket (Fernandez-Puertas 1997, p.362). It also occurs in the ceiling of the Salon de Comares but not as a multiple repeat, since it is part of an interlace with a variety of polygonal stars (Cabanelas Rodriguez 1988).

The casket’s ajouré technique differs considerably from the fretwork of our second group. It looks less like lace and more like pierced window grille. In the relative proportions of its sculpted bands and voids, and in the width and depth of the bands, it recalls two marble window screens from a late tenth-century building in the region of Cordoba, and, as on those screens, the bands are given added visual strength by a central groove (New York 1992, cat.42).

The architectural analogy is reinforced by the projecting moulding around the base. This takes the form of two registers with identical cyma reversa profiles, forming the equivalent of a plinth or skirting. As the lid is now missing, it is unclear if it projected in a similar fashion, but it is difficult to imagine that, when the base projected, the lid had an outer edge flush with the body. The depth of the lid can nevertheless be gauged from the pins that emerge from one of the surviving hinges. The straight pin is 2cm long, but as it has been cut it suggests the lid was of similar height to the skirting, which is 2.4cm high. It seems reasonable to assume they were of similar height and similar profile. Regardless, this casket is exceptional, as no other known Andalusi casket of any shape or date has projecting mouldings. In every other case the outer edge of the base, body and lid formed a straight outline.

The present casket is also exceptional in that all other caskets had hinges attached to the outside of the body and the lid. In this casket the hinges were completely hidden. Reducing the number of external fittings placed greater emphasis on the casket’s form and the unctuous sensuality of its ivory. There must nevertheless have been several visible fittings. Using the analogy of the Almohad and Nasrid polygonal caskets, there was probably a small metal ring handle in the centre of the lid to help with opening. On the side opposite the surviving hinges there was once a rectangular escutcheon for the lock, as we can tell from drill holes not found on the other sides, and some slight discolouration and minor breaks in the ivory. There would have been a narrow hasp coming down from the lid, as we can see from the indent cut into the top of this face of the body. This arrangement of a narrow hasp and a relatively large metal escutcheon can be found on numerous Andalusi caskets. The surviving hinges suggest that the now lost metal fittings would have been gilded copper.

Only one other Andalusi casket – in the cathedral in Vic, inland from Barcelona (Ferrandis 1940, vol.II, cat.96, pl.LXV) – has openwork geometrical decoration in any way comparable to the present casket, but without the more complex interlacing.

This present casket is thus exceptional in several respects, and even in its present condition it exudes an aesthetic confidence, combining an architectonic solidity of form with the dynamic angularity of its geometric interlace.

We are grateful to Julian Raby for cataloguing this lot.