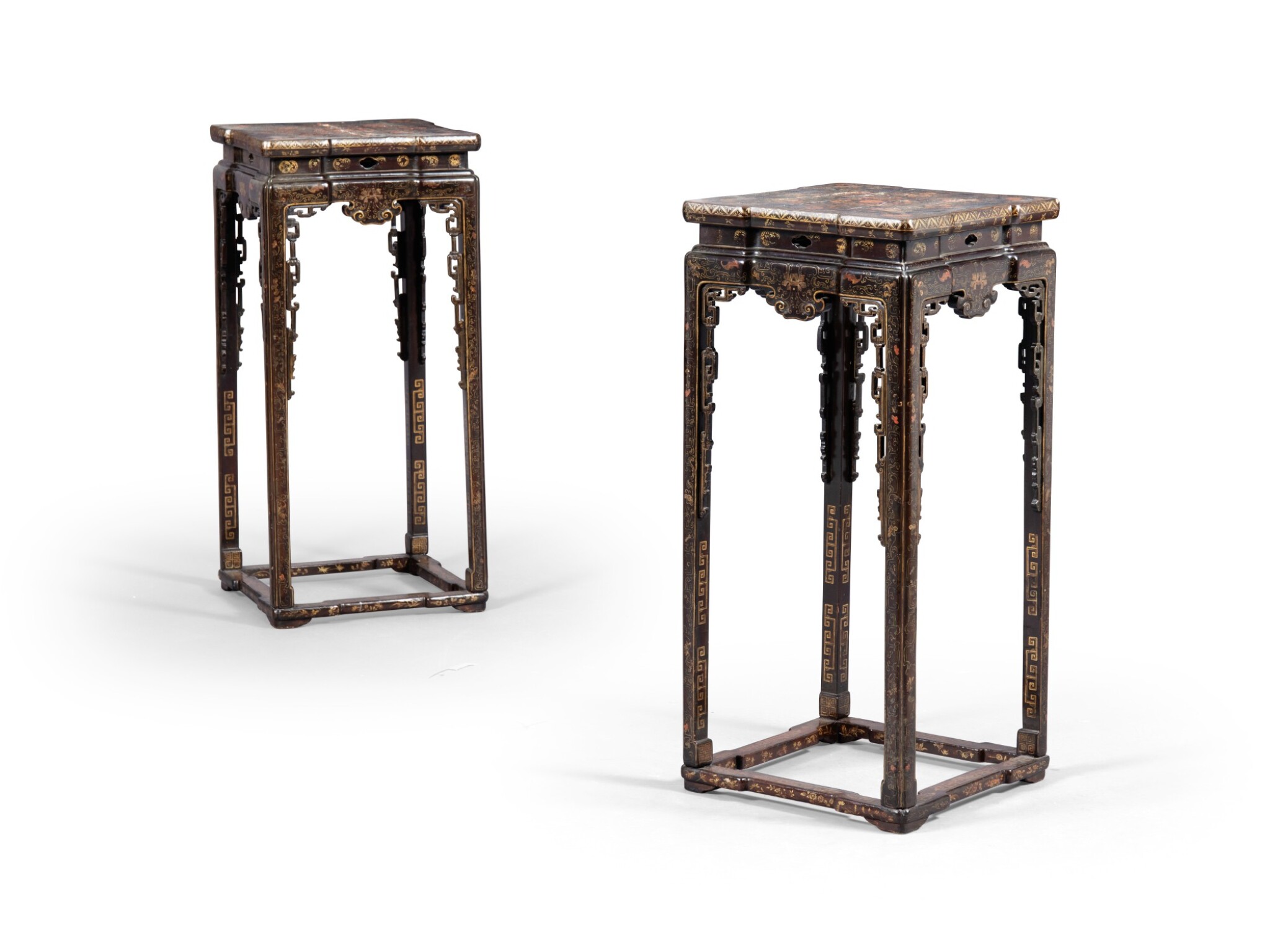 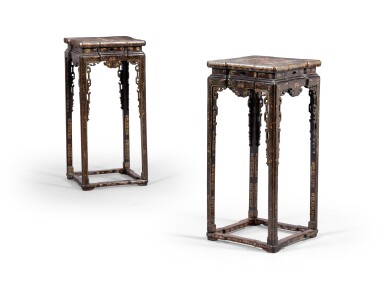 The fragile decoration on the two stands is quite spectacular and have been generally very well preserved.

There are some crackles and rises to the lacquer on the two tops (as visible on the photos) that have been stabilized; as well as some small occasional retouching to the painted decoration. There are few small losses of lacquer, more visible on one of the two tops and some old restorations to the reticulated flanges to the interior of the legs.

These two spectacular lacquer stands belongs to a distinct group of lacquered furniture and decorative works of art produced during the Yongzheng and early Qianlong period.

The taste for this type of lacquered furniture already started in the late Ming dynasty as exemplified by a 17th century painted lacquer throne fashioned in a similar technique in the collections of the Victoria and Albert Museum, ref W. 81-1923, illustrated in Daisy L. Goldsmidt, Arts de la Chine, Or, Argent, Bronze des époques Tardives, Emaux, Lacques, Bois, Fribourg, 1960, p. 410. However these became increasingly popular under the Kangxi and Yongzheng emperors reigns as a significant number of examples that survive in the former imperial collection, now in the Palace Museum in Beijing, illustrate. Compare a table in polychrome lacquer illustrated in Hu Desheng, The Palace Museum Collection: A Treasury of Ming & Qing Dynasty Palace Furniture, vol. 1, Beijing, 2007, p. 100, fig. 77. See also a lacquer table in Furniture of the Ming and Qing Dynasties (II), the Complete Collection of Treasures of the Palace Museum, Hong Kong, 2002, no. 137. Other lacquer furniture decorated with openwork keyfret decoration include a table published in Michel Beurdeley, Chinese Furniture, New York, 1979, pl.82, from the collection of C.T. Loo. and a Qing dynasty lacquer throne, in the collections of the Nelson-Atkins Museum, illustrated in Tian Jiaqing et. al., in Classic Chinese Furniture of the Qing Dynasty, Hong Kong, 1996, pl. 51.

Compare also the decoration on these stands with that found on the original fitted box of an Imperial Yixing stoneware inkstone of the Yongzheng reign, similarly decorated in gilt and red lacquer with flowers and bats, sold at Christie's London, 3rd November 2020, lot 153.