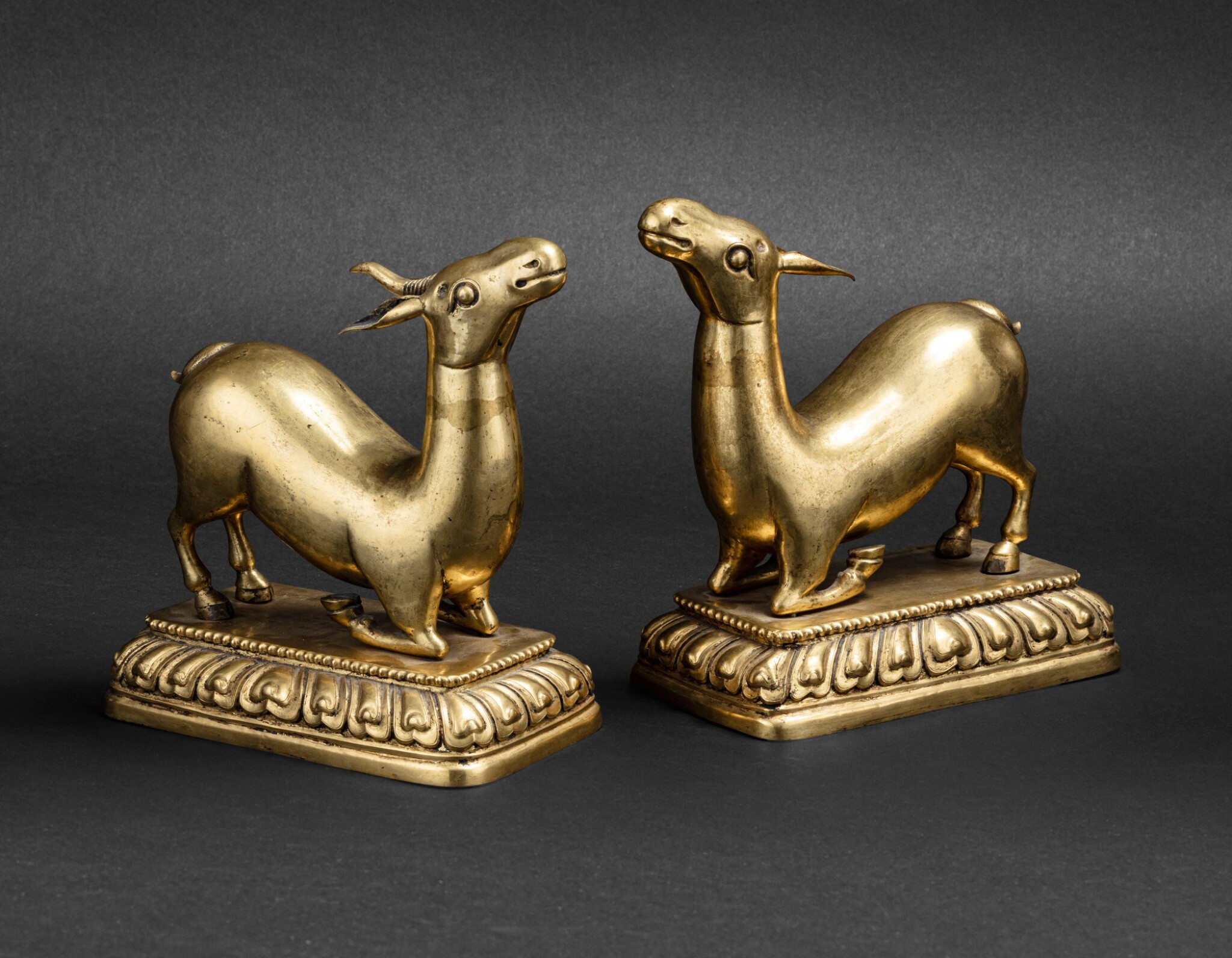 Both have been cast separately in two parts. Both have very light wear to the gilding and light scratches to the surface. The female deer has a dent to its left hind quarter. The repoussé stands are not sealed.

A pair of male and female kneeling deer (mriga) worshipping a wheel of the law (dharmachakra) is one of the earliest emblems of Buddhism, seen carved on Kushan period (1st-3rd c) Buddhist sculpture, such as a Gandhara schist panel in the British Museum, see W. Zwalf, Gandhara Sculpture in the British Museum, London, 1996, Vol. I, pl. IX, cat. no. 199. The deer symbolise the First Sermon given by the historical Buddha shortly after he attained enlightenment at the vajrasana site in Bodh Gaya. The Buddha is said to have taught the Four Noble Truths to disciples gathered in the deer park (mrigadawa) at Sarnath. The deer are said to have been attracted by the Buddha’s serene presence and joined the disciples. The male and female deer together symbolise harmony and fidelity, and in Chinese mythology are symbols of longevity. Gilt copper deer flanking a dharmachakra wheel are often placed on altars or monastery roofs in Tibet, Mongolia and China, such as those above the gates of the Jokhang, Lhasa, see Giuseppe Tucci, Tibet: Land of Snows, Calcutta, Bombay, New Delhi, 1967, p. 62, pl. 24.

Gilt copper deer are often depicted in a recumbent posture with all four legs folded beneath the bodies, such as the pair sold in these rooms, December 16, 2010, lot 85, while those kneeling with only their front legs folded, like the present examples, are rare, cf. the similar kneeling posture of a gilt copper single-horned male deer from the collection of Eduard von der Heydt in Museum Rietberg, see Blanche Christine Olschak, Mystic Art of Ancient Tibet, Boston & London, 1987, p. 56