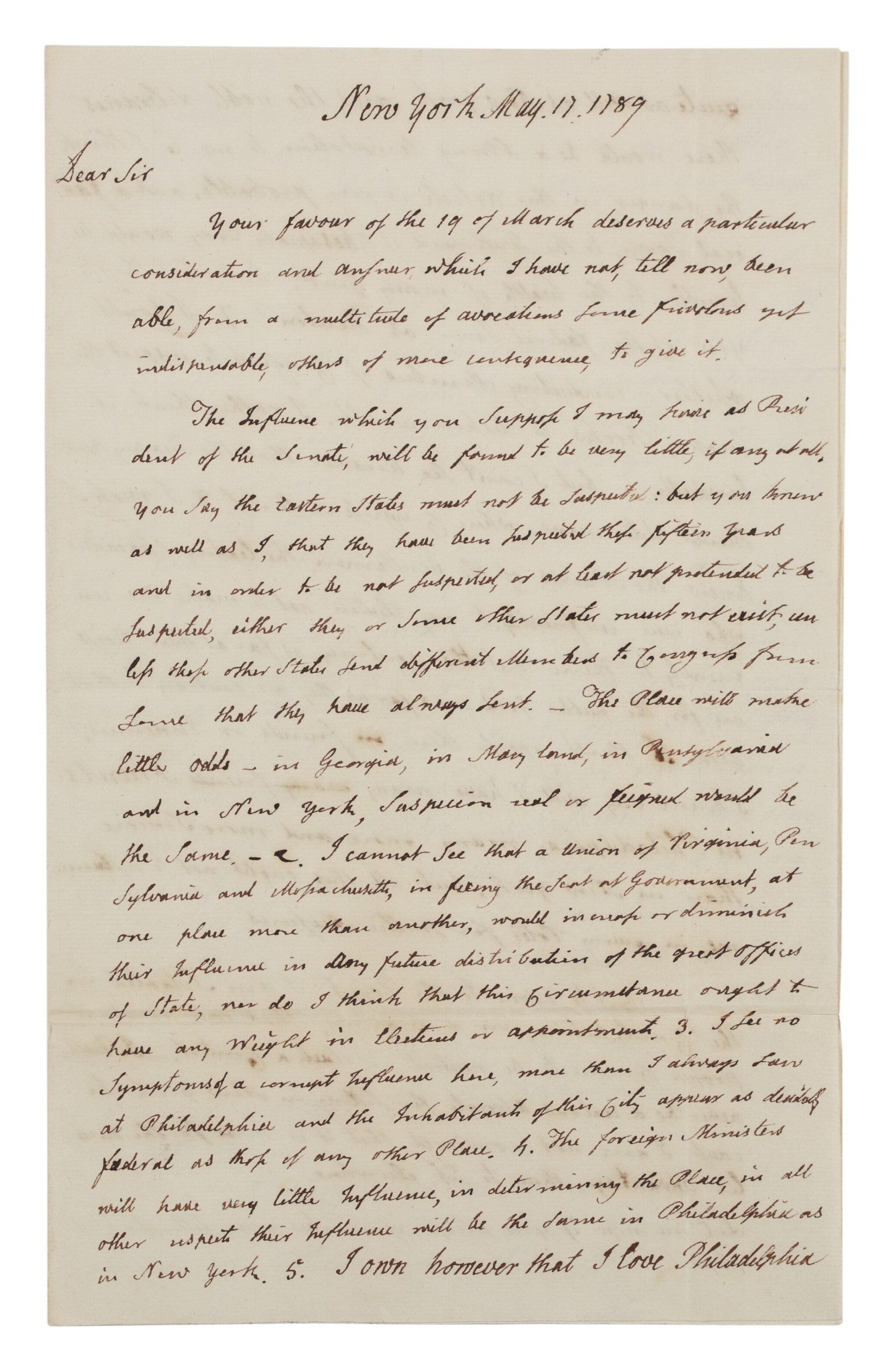 Dr. Rush had written to Adams arguing that "the residence of the Congress of the United States" ought to be fixed in Philadelphia. The Vice President here responds point-by-point to to Rush's pleading (albeit forgetting to number his first two responses). "Your favour of the 19 of March deserves a particular consideration and answer, which I have not, till now, been able, from a multitude of avocations some frivolous yet indispensable, others of more Consequence, to give it.

"The Influence which you Suppose I may have as President of the Senate, will be found to be very little, if any at all. You say the Eastern States must not be suspected: but you know as well as I, that they have been suspected these fifteen years and in order to be not suspected, or at least not pretended to be suspected, either they or some other States must not exist, unless those other States send different Members to Congress from some that they have always sent.— The Place will make little odds—in Georgia, in Maryland, in Pennsylvania and in New York, Suspicion real or feigned would be the Same.— I cannot see that a Union of Virginia, Pennsylvania and Massachusetts, in fixing the Seat of Government, at one place more than another, would increase or diminish their Influence in any future distribution of the great Offices of State, nor do I think that this Circumstance ought to have any Weight in Elections or appointments. 3. I see no Symptoms of a corrupt Influence here, more than I always saw at Philadelphia and the Inhabitants of this City appear as decidedly federal as those of any other Place. 4. The foreign Ministers will have very little Influence, in determining the Place, in all other respects their Influence will be the same in Philadelphia as in New York. 5. I own however that I love Philadelphia quite as well as New York, and the noble Libraries there would be a Strong temptation to me. 6. I think the danger in this article is very probable, and a federal Town, to the southward of Chesapeak Bay, would be terrible to the health of many Gentn. but what think you of the federal Town at Trenton? 7. I doubt whether conducting Members of Congress to inspect the Treasury Books, is dishonourable. I rather think it laudable.— but I cant see however that the Treasury Books should determine where Congress is to Set. 8. I wish I knew the Names of the Gentlemen, the leading Characters who were unfriendly to my Election, not to make me unfriendly to them but the contrary, as far as their Views are for the public Good—as far as they are contrary to that good I should oppose them friends or Enemies. I know very well that I have many Friends in Philadelphia, many more and more Sincere than in New York: but all this ought not to influence me in giving Votes for public Measures."

Adams closes this portion of the letter by claiming that Constitution compels him to be neutral in this matter, but pledges that he will "never be a zealous advocate for sitting in New York." He then turns his attention to a second unanswered letter from Rush, this one from 22 April, which urged Adams to use his influence to secure the appointment of Chief Justice of the Supreme Court for James Wilson, Rush's fellow Pennsylvanian. Adams responds:

"My Situation, at the head of the Senate, where I was placed by the People at large, not as the Members were by their Legislatures, instead of giving me an Influence as you Suppose will prevent me, from having any.— Mr Wilson, I have long known esteemed and respected: but, if I had a Vote, I could not promise to give it to him to be Chief Justice.— All Things considered, that have ever come to my knowledge I feel myself inclined to wish, because I am fully convinced, that Services, Hazards, Abilities and Popularity, all properly weighed, the Ballance is in favour of Mr Jay.— One of the Judges I wish Mr Wilson to be: and the difference is not great between the first and the other Judges." Adams's wish was in this case fulfilled, as President Washington nominated, and the Senate confirmed, John Jay as the first Chief Justice and Wilson as one of the first Associate Justices.

The tone of Adams's letter then becomes someone sharper, as he reprimands his friend for some of the special pleading in his request. Adams also bemoans the "scurvy" office of Vice President, which he had inaugurated less than a month before: "You say I had not a firmer Friend in the late Election. I must protest against this mode of reasoning. I am not obliged to vote for a Man because he voted for me, had my office been ever so lucrative or ever so important.— But ask your own heart.— is not my Election to this office in the Scurvy manner in which it was done, a Curse rather than a Blessing?— Is there Gratitude? is there Justice? is there common Sense or decency in this Business? Is it not an indelible Stain on our Country, Countrymen and Constitution? I assure you I think it so, and nothing but an apprehension of great Mischief, and the final failure of the Government, from my Refusal and assigning my reasons for it, prevented me from Spurning it."

In concluding the letter, the Vice President reaffirms his friendship with Rush, but makes clear that he does not to receive any further appeals that suggest a susceptibility to venality. "Now my Friend we start Fair— Never must I again hear a Selfish Motive urged to me, to induce my Vote or Influence in publick affairs. I never served the Public one moment in my Life, but to the loss and injury of myself and my Children, and I Suffer as much by it, at this Moment as ever.

https://founders.archives.gov/documents/Adams/99-02-02-0563 (Early Access Link; text from Adams Family Papers Letterbooks, with scores of variations, many substantive, from the original letter)