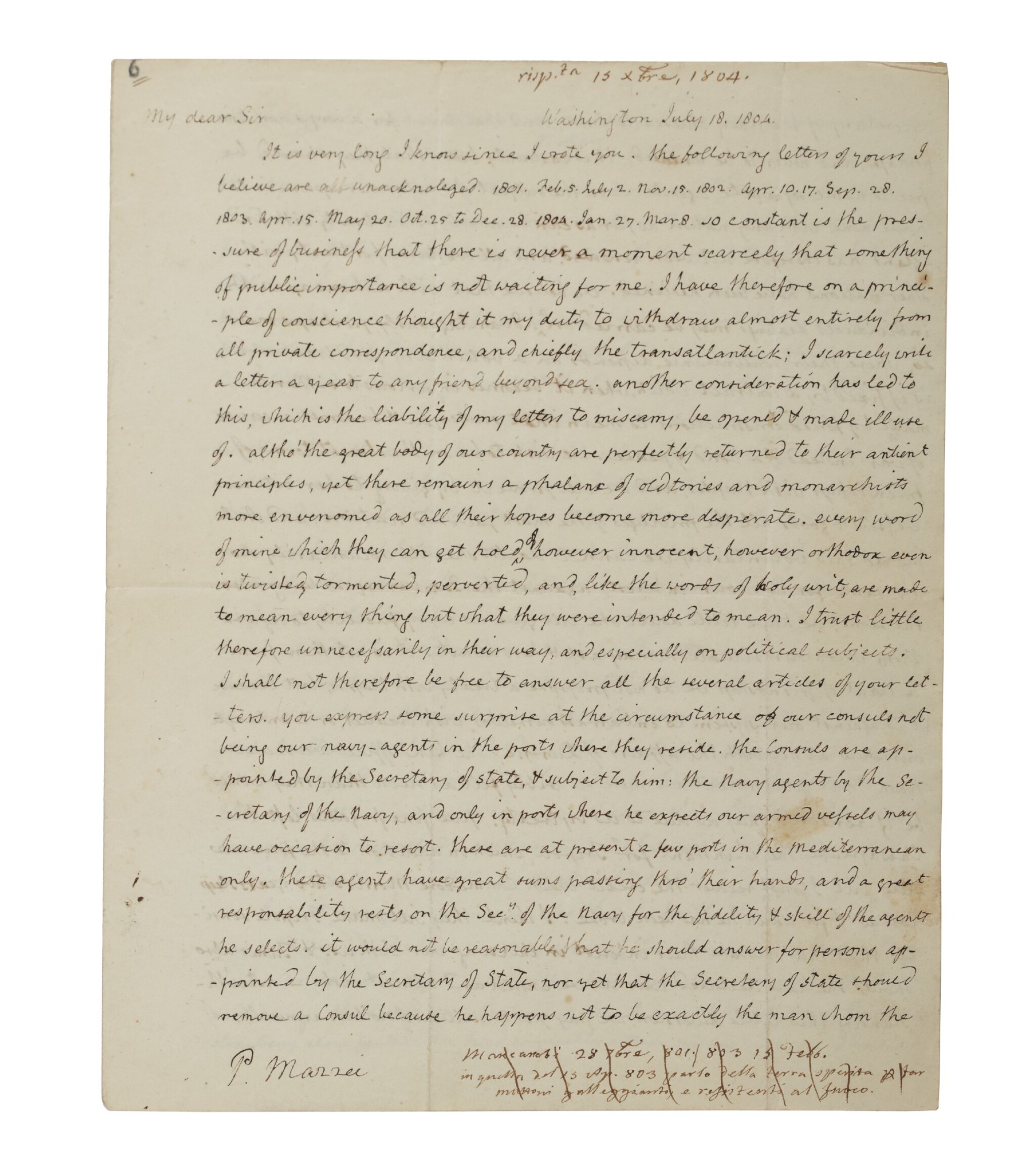 Claiming that "so constant is the pressure of business that there is never a moment scarcely that something of public importance is not waiting for me," Jefferson begins his letter with an apology for not having written to Mazzei for so long—actually listing the dates of twelve letters from Mazzei going back to 5 February 1801 that he admits "are unacknoleged." However, Mazzei should not feel slighted, Jefferson explains, because he has "on a principle of conscience thought it my duty to withdraw almost entirely from all private correspondence, and chiefly the transatlantick. …" But Jefferson concedes that there is another, more malign, consideration for the limitation on his correspondence beyond the press of presidential business: "the liability of my letters to miscarry, be opened & made ill use of. altho' the great body of our country are perfectly returned to their antient principles, yet there remains a phalanx of old tories and monarchists more envenomed as all their hopes become more desperate. every word of mine which they can get hold of, however innocent, however orthodox even is twisted, tormented, perverted, and, like the words of holy writ, are made to mean every thing but what they were intended to mean." Because of this possibility, Jefferson continues, he avoids "political subjects" in his overseas letters and so will not be free to answer all of the questions raised by Mazzei in his several letters.

After clarifying to Mazzei that United States consuls are appointed by the Secretary of State, while naval port agents are appointed by the Secretary of the Navy, Jefferson gives an extended discourse on his administration's attitude towards foreign treaties:"on the subject of treaties our system is to have none with any nation as far as can be avoided. … we believe that with nations as with individuals dealings may be carried on as advantageously, perhaps more so, where their continuance depends on a voluntary good treatment, as if fixed by a contract which, when it becomes injurious to either is made by forced constructions to mean what suits you & becomes a cause of war instead of a bond of peace."

This philosophy, Jefferson explains, is applied equally to friends like Naples and enemies like the Barbary States "because it is against our system to embarrass ourselves with treaties, or to entangle ourselves at all with the affairs of Europe." The President also provides some information about the Barbary War: "five fine frigates left the Chesapeake the 1st. instant for Tripoli, which in addition to the force now there will I trust recover the credit which Commodore Morris’s two years sleep lost us, & for which he has been broke. [Commodore Robert Morris, who led an unsuccessful blockade of Tripoli, was recalled and found by a board of inquiry to have not demonstrated "due diligence and activity in annoying the enemy."] I think they will make Tripoli sensible that they mistake their interest in chusing war with us: & Tunis also should she have declared war as we expect and almost wish."

Mazzei had befriended Jefferson shortly after he first arrived in the American colonies in 1773. He spent much of the next twelve years in support of the patriot cause, but returned to Europe for good in 1785. The President next provides him an insightful summary of political developments during the intervening two decades. "the spirit of republicanism is now in almost all it’s antient vigor, five sixths of the people being with us. 14. of the 17. states are compleatly with us, & 2. of the other 3. will be in one year. we are now got back to the ground on which you left us. I should have retired at the end of the first 4. years but that the immense load of tory calumnies which have been manufactured respecting me & filled the European market have obliged me to appeal once more to my country for a justification. I have no fear but that I shall recieve honorable testimony by their verdict on those calumnies. at the end of the next 4. years I shall certainly retire. age, inclination and principle all dictate this. …"

Jefferson next allows himself to reflect with satisfaction on the recently completed Louisiana Purchase, probably the greatest achievement of his presidency. "the acquisition of Louisiana, besides doubling our extent, and trebling our quantity of fertile country is of incalculable value as relieving us from the danger of war. it has enabled us to do a handsome thing for Fayette. he had recieved a grant of between 11. & 12,000. acres of land North of the Ohio, worth perhaps a dollar an acre. we have obtained permission of Congress to locate it in Louisiana. locations can be found adjacent to the city of N. Orleans, in the island of N. Orleans and in it’s vicinity, the value of which cannot be calculated. I hope it will induce him to come over & settle there with his family." Jefferson also reports that Robert R. Livingston,who with James Monroe had negotiated the purchase, had asked to be relieved as U.S. Minister to France and is being replaced by his brother-in-law, John Armstrong, a person "of the first order of talents."

As befits a letter to a friend of three decades, Jefferson turns in his conclusion to more personal matters, including two passions he shared with his correspondent: wine and books. (Among other vocations, Mazzei was a horticulturist and had worked in London as a wine merchant before first coming to Virginia.) "I must now give you my sincere thanks for the trees vines &c which you sent me, and which are now growing here. they came in the most perfect order, so that I doubt if one will be lost. they will be removed to Monticello next spring. … mr Appleton was so kind as to send me a fine collection of vines, selected from the Botanical garden of Florence by the Director Lastri, which arrived soon after your's in fine order also and are now growing. I had asked from him some samples of the best wines of Italy. he sent me samples of Chianti, Pomino, Verdea, Alleatico, and a good supply of Montepulciano. being put into strong bottles well corked & cemented, & without oil, they have come in perfect order. the last pleases immensely, insomuch that I have sent to him for a new supply, and believe I shall import it habitually every winter, in which season it will come safe. …the books you were so kind as to send me came safe and claim my thanks. could you get me Molina’s account of Peru, & deliver it for me to Mr. Appleton who will pay the price for me."

On a more somber note, Jefferson reflects on the passing parade of American Patriots, including one killed in a duel by his own Vice President, Aaron Burr, as well as a death within his own family. "remarkeable deaths lately are Samuel Adams, Edmund Pendleton, Alexander Hamilton, Stevens Thomson Mason, Mann Page, Bellini, & Parson Andrews. to these I have the inexpressible grief of adding the name of my youngest daughter [Mary] who had married a son of mr Eppes, and has left two children. my eldest daughter [Martha] alone remains to me, and has 6. children. this loss has increased my anxiety to retire, while it has dreadfully lessened the comfort of doing it."

Jefferson turns at the end of this remarkable missive from death back to life, reporting on the continuing good health of other colleagues and asking after Mazzei's family: "Wythe, Dickinson and Charles Thomson are all living and are firm republicans. you informed me formerly of your marriage, & your having a daughter, but have said nothing in your late letters on that subject. yet whatever concerns your happiness is sincerely interesting to me, and is a subject of anxiety, retaining as I do cordial sentiments of esteem & affection for you. Accept I pray you my sincere assurances of this with my most friendly salutations."