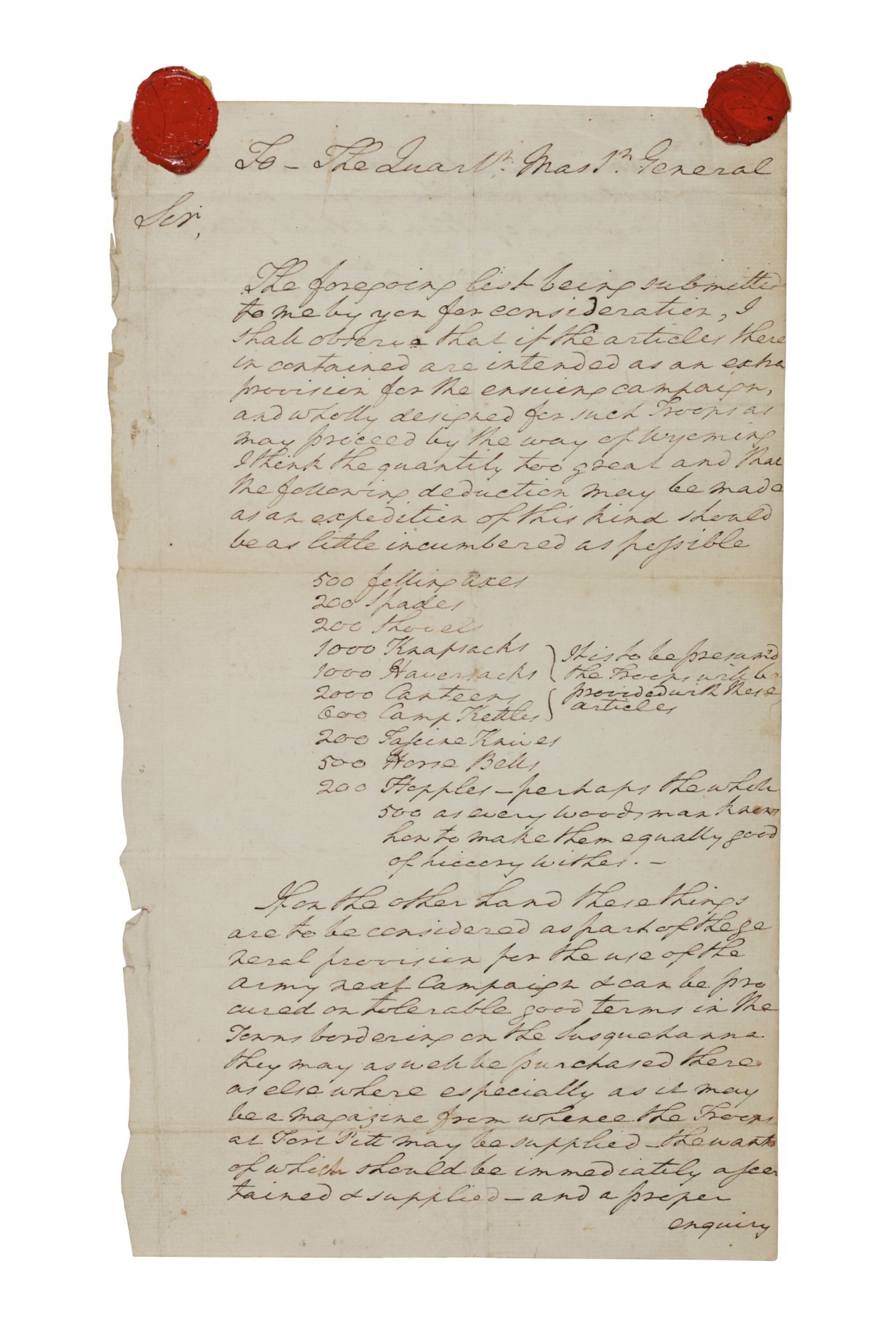 Loyalist militia and Iroquois, sometimes accompanied by regular British troops, began a series of increasingly fierce raids against patriot settlements in Pennsylvania and New York following the Continental victory at Saratoga in the autumn of 1777. Following brutal massacres, including ritual torture, of American patriots in the Wyoming Valley (Pennsylvania) and the village of Cherry Valley (New York) in the second half of 1778, George Washington, on orders from Congress, began to plan a campaign that would eliminate the Haudenosaunee menace from the western frontier.

In the present letter, Washington counsels General Nathanael Greene, who had brought stability to the Continental supply line since assuming the office of Quartermaster General a year earlier. Washington references Greene's proposed list of "Articles to be provided & deposited at Estherton for the ensuing Campaign" and suggests the number of a few of the supplies (Greene's list itemized more than three dozen articles) be reduced.

"The foregoing list being submitted to me by you for consideration, I shall observe that if the articles therein contained are intended as an extra provision for the ensuing campaign, and wholly designed for such Troops as may proceed by the way of Wyoming I think the quantity too great, and that the following deduction may be made; as an expedition of this kind, should be as little incumbered as possible

"200 Hopples—Perhaps the whole 500 as every woodsman knows how to make them equally good of hiccory withes.—

"If on the other hand these things are to be considered as part of the general provision for the use of the Army next Campaign & can be procured on tolerable good terms in the Towns bordering on the Susquehanna they may as well be purchased there as else where especially as it may be a Magazine from whence the troops at Fort Pitt may be supplied—the wants of which should be immediately ascertained & supplied—and a proper enquiry made into the state of these Articles at Albany that there may be no want of them at that place."

General John Sullivan was chosen to lead the retaliatory campaign. Washington's orders to him, 31 May 1779, make clear that he envisioned an irregular expedition, which is why he cautioned Greene not to encumber it with unnecessary equipment:

"The expedition you are appointed to command is to be directed against the hostile tribes of the six nations of Indians, with their associates and adherents. The immediate objects are the total destruction and devastation of their settlements and the capture of as many prisoners of every age and sex as possible. It will be essential to ruin their crops now in the ground and prevent their planting more. … I would recommend that some post in the center of the Indian Country should be occupied with all expedition, with a sufficient quantity of provision, whence parties should be detached to lay waste all the settlements around with instructions to do it in the most effectual manner, that the country may not be merely overrun but destroyed. … But you will not by any means listen to overture of peace before the total ruin of their settlements is effected… Our future security will be in their inability to injure us the distance to which they are driven and in the terror with which the severity of the chastisement they receive will inspire" (Papers of George Washington, Revolutionary War Series, ed. Lengel, 20:716–719).

Sullivan followed his orders, conducting a scorched earth campaign that destroyed many Iroquois villages and their stored crops, forcing many of the Indian people to flee to British protection in Canada. The disputed Treaty of Fort Stanwix, 1784, secured the cession of much of the land of the Iroquois Confederation to the United States and further eroded the influence of the Six Nations.

Papers of George Washington, Revolutionary War Series, ed. Chase & Ferraro, 19:318–320 (not locating the original; text from a "copy" at the American Philosophical Society, with dozens of errors in spelling, capitalization, and punctuation); see note for full text of "Articles to be provided & deposited at Estherton for the ensuing Campaign"

Isabella Tennent, apparently from Ireland (autograph note on verso of letter explaining that it was procured for her by her brother Roswell Allen King Tennent)