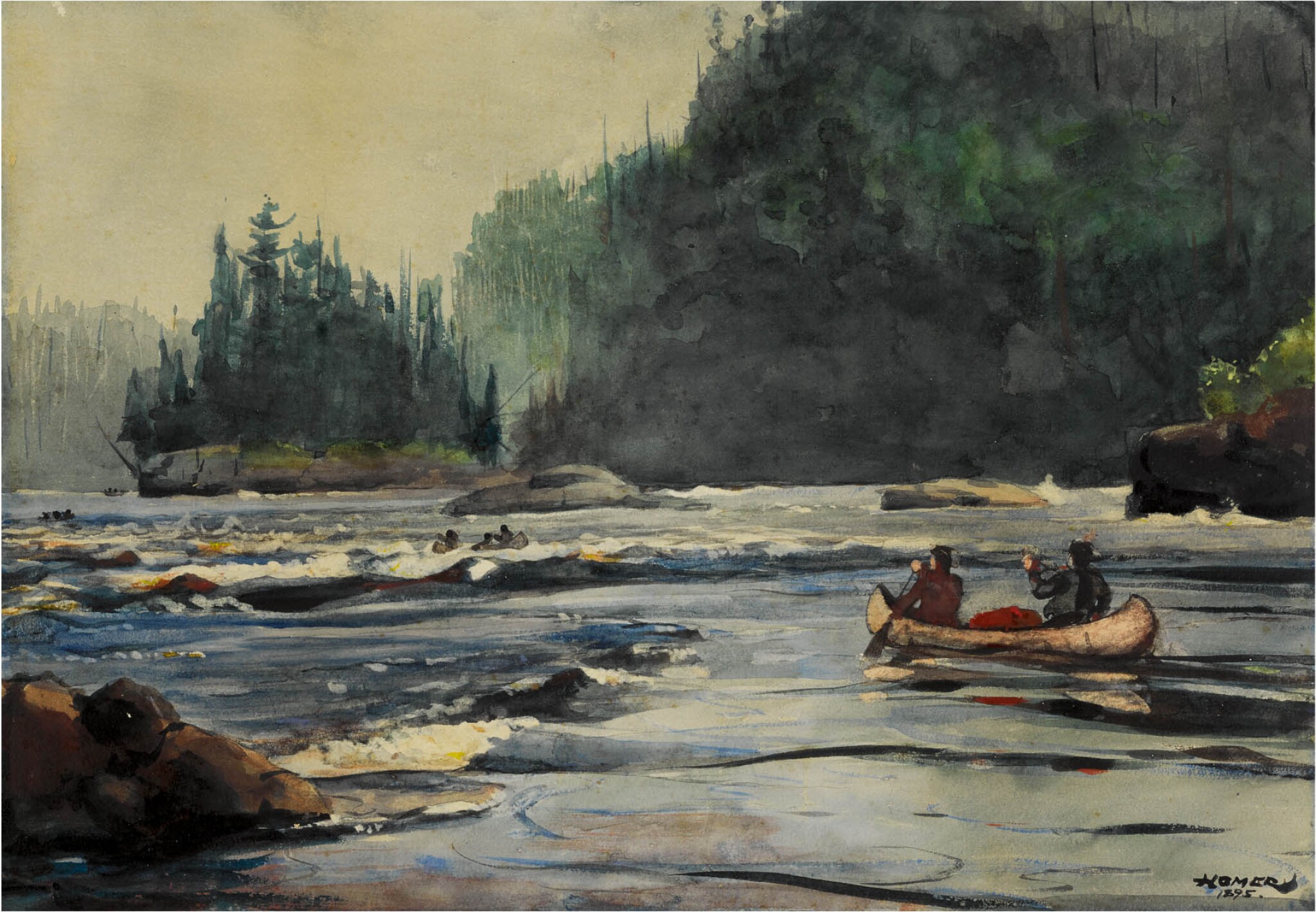 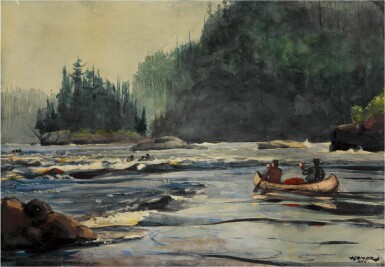 Henriette H. Failing, Portland, Oregon, 1905 (acquired from the above)

By descent to the present owner, 1988

“I shall be all through my work by July… and shall loaf about in different places, Canada preferred.” -Winslow Homer

Winslow Homer’s love of the great outdoors profoundly impacted his life and his art. Often accompanied by his brother, Charles, Homer traveled throughout North America, exploring places such as the Adirondack Mountains in New York, Florida, the Bahamas and Canada. These trips not only allowed Homer to partake in the leisure activities of hunting and sport fishing that he so loved, but also provided him opportunities to paint the bucolic landscape he encountered. Beginning in the 1890s, Homer made at least three trips to the Canadian province of Quebec. He ultimately produced two oil paintings and approximately 50 watercolors inspired by the scenery and people he observed there.

While in Quebec, the Homer brothers most often visited the fishing sites at Laurentides and the Saguenay River, both of which became more accessible to tourists by the last decades of the 19th century as completed railway systems allowed for more convenient travel. In the Rapids likely portrays the outlet of the Saguenay into Lake St. John know as the Grand Discharge, which was characterized by turbulent waters and dramatic waterfalls. Likely executed during his second Canadian sojourn, In the Rapids effortlessly captures the dynamic character and raw beauty of this distinctive landscape, while also demonstrating Homer’s technical mastery of the watercolor medium.

In the present work, Homer depicts two canoes afloat in the Saguenay. The smaller vessel in the distance has already encountered an area of choppy rapids while the two men steering the canoe in the foreground are poised to enter it, imbuing the scene with a palpable sense of anticipation. The figures are dwarfed by the trees of the surrounding woodland, emphasizing the wild isolation of the environment.

Homer likely observed this scene while standing on the banks of the river from a considerable distance. The artist’s painterly treatment of the watercolor reinforces the notion that the artist captured the scene firsthand. His rendering of the tempestuous water is particularly energetic as he enlivens broad washes of blue and gray pigment with bold strokes of black and vigorously applied passages of white and yellow that suggest its inherent motion. Homer’s fascination with capturing the power of water is central to his body of work, and is fully on display in works such as In the Rapids, where the dynamism and danger of the river seem to become the subject of the watercolor itself.

In the Rapids was one of 27 works selected by Homer for the traveling exhibition, Water Colors by Winslow Homer of Life and Scenes in the Province of Quebec, which was shown at four venues from 1898-1899. Homer received great critical acclaim for the exhibited works, with one review for the New York Sun writing that, “in all of the pictures the artist’s various qualities of excellence appear in more or less striking evidence, and the collection is one of great artistic interest. The fresh air of the locality, the wild character of the scenery, the typical signs of the men who fish and navigate these picturesque and ever-changing waters are all given with freshness of touch and convincing directness. … Mr. Homer is surpassed by no living artist in originality of method and satisfying results in interpreting such phases of life and nature as appear in these admirable pictures” (quoted in David Tatham, “Winslow Homer in Quebec,” Winslow Homer: Artist and Angler, New York, 2005, p. 153).