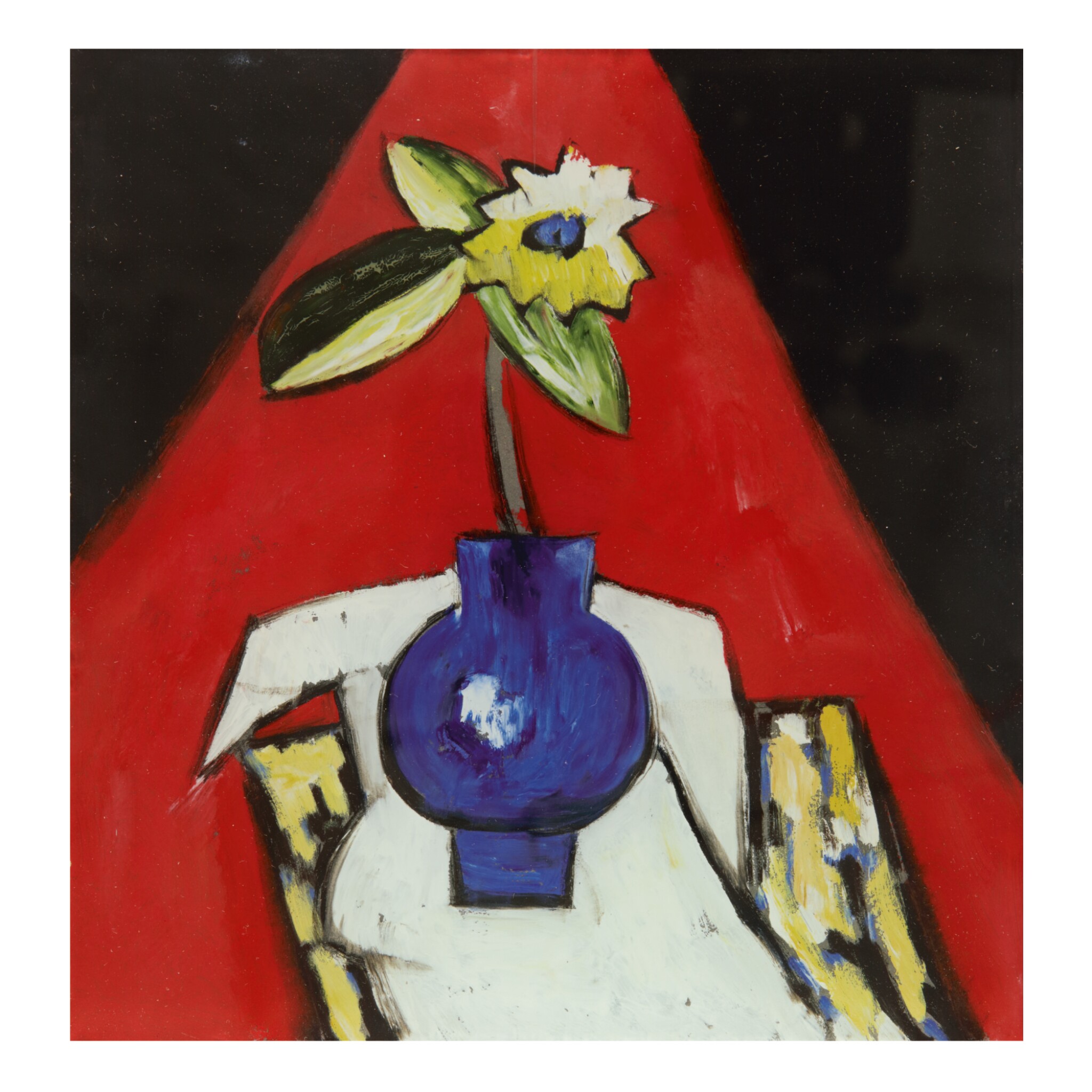 FLOWERS IN A VASE

This painting will be included by Gail R. Scott in the forthcoming Marsden Hartley Legacy Project: The Complete Paintings and Works on Paper, Bates College Museum of Art, Lewiston, Maine.

We are grateful to Gail R. Scott for preparing the following note:

Of the many Marsden Hartley works recently come to market, Flowers in a Vase is special for two reasons: first, as one of about fifteen paintings on glass that the artist executed and second, its distinguished ownership—Alfred Stieglitz and then Georgia O'Keeffe. At Stieglitz's death in 1946, O'Keeffe inherited the artworks in his collection and eventually gifted over 1000 of them to his estate. The fact that of the scores of works by Hartley owned by Stieglitz, O'Keeffe kept Flowers in a Vase for herself is noteworthy.

A strikingly vivid example of the artist's paintings on glass, Flowers in a Vase boldly captures our attention by centering the cobalt blue vase with its yellow flower and three leaves in the center of a brilliant red triangle. The palette of primary colors, the abstract composition, and areas of thick impasto mark Flowers in a Vase as unique among this series. Known throughout his career for the intensity and ubiquity of his use of black, Hartley favored black for the background of his glass paintings for its strong counterpoint to the bright hues of the main event.

Hartley first encountered the technique of reverse painting on glass in 1912 in Paris—in examples of Bavarian religious folk art reproduced in Der Blaue Reiter Almanac, published by Wassily Kandinsky. Months later, when visiting Kandinsky and fellow artist, Gabriel Münter in Murnau, Germany, Hartley, admired their large collection of "Bavarian glass Bilder." Following their example, he purchased six for himself, which he reported, "give me great joy." In long letters to Stieglitz, Hartley recounted these discoveries, sent him a copy of Der Blaue Reiter Almanac, and extolled his own glass Bilder as "wonderful expressions of religious symbolism."

It was not, however, until 1917 and back in the United States that Hartley attempted reverse painting on glass. In residence that summer at the school and artist's colony founded by Hamilton Easter Field and Robert Laurent in Ogunquit, Maine, and inspired by abundant American folk art that decorated the buildings in the compound, Hartley experimented with the technique. A complicated process, it entails application of paint (with complete drying in between) on the reverse side of a piece of glass: first the design, then color details, and finally a solid covering of one or more background colors.

Hartley's glass paintings were shown at Ogunquit in August 1917 and in 1919 at Charles Daniel's gallery, though not with Stieglitz at 291. Nevertheless, Stieglitz's owned at least eight of them, five of which went to major museums as part of his estate. Of the three paintings at Fisk University (Nashville, Tennessee), Still Life No. 1 most closely resembles Flowers in a Vase in composition, while Painting No. 69 features a similar palette of intense blue, red and white, against a solid black ground.