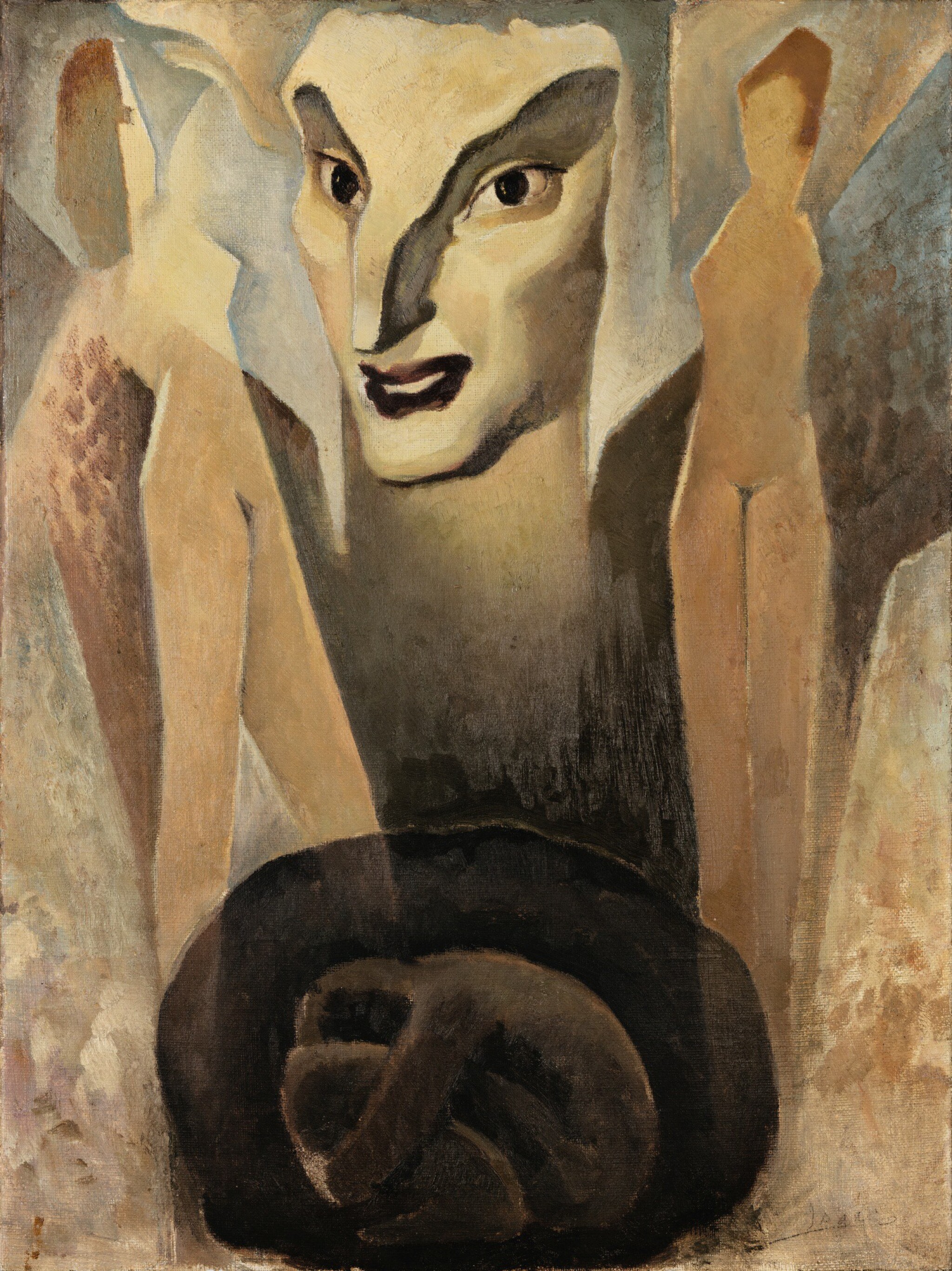 This work is in overall good condition. The canvas has been re-stretched. The painting has been cleaned by a professional restorer. There appears to be very minor spots of paint loss on the top left, around the forehead of the central figure, as well as small pinpoints of paint loss on the upper left corner. There is a very minor spots of paint loss along the bottom center edge. There are some restoration patches visible on the reverse of the canvas. There are signs of restoration across the edges and some scattered areas of the painting when viewed under the UV light.

Estate of the artist, Paris

Acquired from the above by the present owner in 2014

Sotheby’s is delighted to present this rare and momentous work by Ramses Younan, completed in Cairo in 1935 at his young age of 22. The present work explores themes of poverty and disparity throughout a period of social inequality and extreme poverty experienced across Cairo. The divergence between the wealthy and the underprivileged is prevalent in the work, especially when one examines the juxtaposed figures represented across the canvas.

One can interpret the prevalent figure centred at the top of the canvas as a representation of the powerful and wealthy; strikingly accentuated, with strong angled features, including a long angular nose, large deeply fixed eyes and prominent cheekbones. The dominant figure hovers powerfully amid two faceless nude forms, which stand obediently on either side, as though in representation of the voiceless members of society who hold up the pyramid of wealth and power. In contrast, when observing the lower section of the work, one distinguishes representation of the underprivileged; a faceless and vulnerable figure is illustrated amid a shadow of darkness, in a fetus-like position of susceptibility and helplessness.

Like the work by Salvador Dali entitled Le Sommeil painted in 1929, six years prior to Untitled Younan, both works share a unique similarity in the distortion of the main face. Both artists employ angular and enlarged noses in the main character – alluding to the fragility of the senses in the world fraught in the aftermath of The Great War. Both faces are also painted in a muted earthy palate, with tonalities ranging from sandy beige by Younan to mud brown by Dali reflective of their respective territory. Manifesting elements of Surrealism, through the depiction of unknown realities - both artists delve deep into their characters, into the abyss of alienation, lost on the canvas with very few elements providing them with support and constitution. Younan is quoted referencing the same Freudian concept of the unconscious espoused by Dali. He writes in his book Ghayat al-rassam al’asri (The Aim of the Contemporary Painter): “And the art of this set is susceptible to descent into the manner and artificial type where there is more of the conscious mind’s ingenuity and skill than the imagination and the desires of the subconscious mind.” (Exh. Cat., Paris, Centre Pompidou, Art et Liberté: Rupture, War and Surrealism in Egypt (1938 - 1948), 2016, p. 142).

Although the majority of the artwork created during the Art and Liberty movement dealt with Egyptian subject matter, the artists were still very much connected to their international counterparts, such as American photographer Lee Miller and French writer André Breton. They were also largely affected by the Nazi looting of European artworks. These international relationships and influences facilitated the introduction of Surrealism to Egyptian art history, enabling artists to foster Egyptian Surrealism. Furthermore the prominent founder of the group, Ramses Younan, sought to establish a new type of Surrealism known as Subjective Realism. In an attempt to move away from the premediated style of Dali and Magritte, Younan identified the need for a surrealist art form that allowed for radical dreaming, was void of any pre-conceived notions and included works “driven by the subconscious impulse,” also referred to by the artists Kamel El-Telmissany as Free Art. Ramses Younan was not only one of the most prominent painters in Egypt, but was also an essayist, critic and the co-founder of the Art and Liberty group. After attending the School of Fine Arts in Cairo, Younan experienced recognition of his art by participating in many exhibitions in the 1930s. Soon after, Younan moved to France for eleven years, before returning to Egypt where he further developed his figurative, yet not realist style of painting.

Besides his art, Younan was also very much an intellectual. He was keen on raising awareness of modern art in his native Egypt. In 1943, he maintained his status as a prominent critic and writer with his role as the editor of El Magalla El Guidida (the new magazine) – a revolutionary and artistic publication.

This important work was exhibited in Paris’ Centre Pompidou in 2016, as part of the seminal exhibition entitled Art et Liberté: Rupture, War and Surrealism in Egypt (1938 - 1948). As the most highly acclaimed father of Egyptian Surrealism, and later an explorer of abstract art, Ramses Younan has left an indelible mark on the Egyptian art scene of the last century, and Sotheby’s is delighted and honoured to be offering this masterpiece.