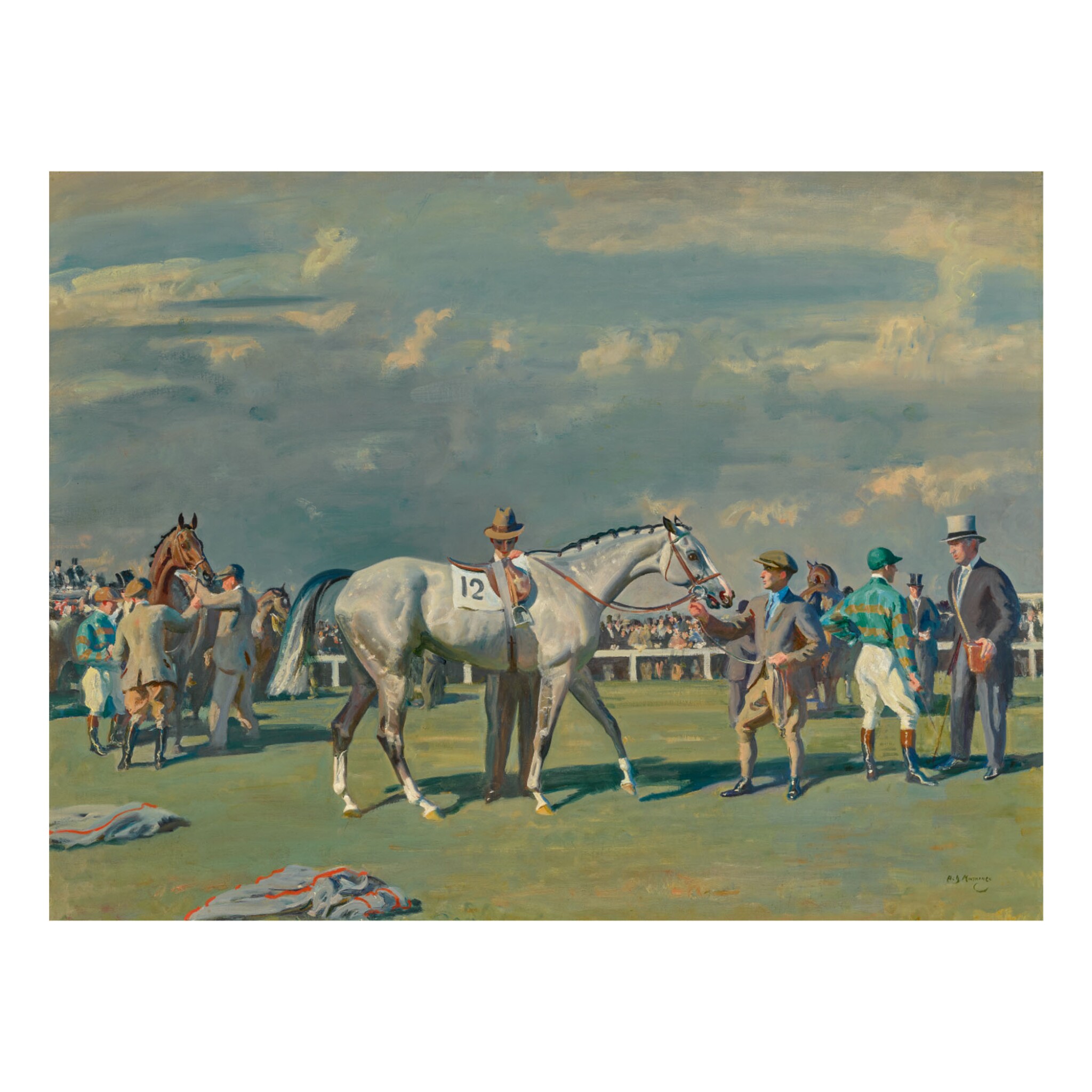 MAHMOUD BEING SADDLED FOR THE DERBY, 1936

The following condition report was kindly provided by Simon Parkes Art Conservation, Inc: Not examined out of the frame. This work is in very good condition. The canvas is unlined and well stretched on its original stretcher. The surface shows no cracking or instability. The paint layer is clean and varnished. Although some of Munnings' original color reads unevenly under ultraviolet light, this does not correspond to retouching. There do not appear to be any retouches at all. The work should be hung in its current state.

Please note this is a Premium Lot.

Celebrated as the most brilliant and innovative painter of horses since George Stubbs, Sir Alfred Munnings returned often to the spontaneity of race day. He was struck by the colors and drama of the sport in 1899 when he attended country races at Bungay to celebrate his first two pictures being accepted to the Royal Academy. His experience at the Académie Julian in Paris, where he studied in 1902 and 1903, and his travels on the continent exposed him to the Impressionists and plein air painting, which he adapted to perfectly fit his style and equine subject. His keen appreciation for the individuality and personality of each horse he depicted formed the foundation of each work he created.

Mahmoud was bred in 1933 by the Aga Khan by Blenheim, the winner of the 1930 Derby, out of Mah Mahal, daughter of the "Flying Filly" herself Mumtaz Mahal, widely thought to be the fastest horse ever seen on an English track. He stood just 15.3 hands when he failed to make his reserve at the Deauville yearling sale and was retained for the Aga Khan’s racing stable by default. He was sent to England to be trained by Frank Butters at the Fitzroy House stable in Newmarket, Suffolk. In his two-year-old season, he posted impressive wins at the Exeter Stakes at Newmarket's July meeting; the Richmond Stakes at Goodwood, which he won over six furlongs; and the Champagne Stakes at Doncaster, which he led from start to finish.

An unimpressive run at the 2,000 Guineas at Newmarket in April 1936 set Mahmoud up for a thrilling race at Epsom in June. In a field of twenty-two horses, against odds of 100/8 and with a course so hard it was almost bare, Mahmoud prepared to run against his stable companions Taj Akbar, ridden by the Champion Jockey Gordon Richards (both seen at left in the present work), and Bala Hissar. Ridden by Charlie Smirke, Mahmoud pulled off a tremendous victory on this very fast ground, setting two records that would stand until 1995. Mahmoud’s time of 2 minutes 33.8 seconds was the fastest hand-held timing ever clocked, while the Aga Khan remained the only owner in 150 years to have had his colors carried first and second in the Derby (fig. 1).

The present work was commissioned by the Aga Khan to commemorate this record Derby victory. A second, smaller version of the same composition, on panel, was commissioned at the same time and gifted by the Aga Khan to Frank Butters, trainer of Mahmoud and the unbeaten 1935 Triple Crown winner Bahram (sold in these rooms, June 1, 2000, lot 119, for $3,800,750). When the Royal Mail issued a set of six stamps to commemorate the 200th anniversary of the Derby in 1979, Mahmoud Being Saddled for the Derby, 1936 was chosen as one of the iconic depictions of Epsom.

Munnings’ compositions often focused on the intimacy of race day, from the energy of early morning exercising to the tension and concentration of saddling up and the pageantry of riding out to the start. Munnings remembered the execution of this scene in his memoirs:

"I liked Mahmoud, and liked painting him, one reason being that he was looked after by a most intelligent lad who understood me as well as his horse. I see him holding the horse in the paddock — myself with the gout, sitting on a chair brought out from the harness-room, painting away.... I made some good studies of Mahmoud in the paddock. Studies of his head; a back view; in his night-rug in the yard; a large one for the Aga Khan, with the faithful lad who believed in his speed holding him — And yet another smaller painting, also another commissioned by the Aga, which he gave to my old friend, the trainer of the horse — Frank Butters....The scene was the paddock: Mahmoud being saddled — young Freeman, nephew of Frank Freeman, tightening his surcingle — the horse laying his ears — the lad holding him. On the right, Smirke, in the Aga’s colors, talking to Butters wearing a gray topper. On the left Taj Akbar, with Gordon Richards about to mount" (The Second Burst, p. 262).

The Aga Khan was a shrewd breeder, and his stables in the 1920s and 1930s were filled with some of the greatest racing horses of the twentieth century. The Aga Khan’s family had been associated with horses since sixth century Arabia, and his grandfather established a stud and stable in India in the nineteenth century. It was not until the 1910s, however, that the Aga Khan entered into the English bloodstock market, with the purchase of the filly Mumtaz Mahal. Second dam to Mahmoud, her entrance into the Aga Khan stables represented a turning point not just for him but for the future of racing.

With the advent of World War II, the Aga Khan accepted a bid from an American consortium, led by Cornelius Vanderbilt “Sonny” Whitney, for the purchase of Mahmoud in 1940 (fig. 2). When the stallion arrived dockside to be boarded for his transatlantic voyage, the captain refused to take him on the grounds that the required export documentation was incomplete. The delay proved fortunate, as that ship was subsequently torpedoed by a German U-Boat in the Atlantic and sank.

Upon his safe arrival to Kentucky, Mahmoud found a second career as an excellent sire, being crowned American Sire of the Year in 1946. Although Mahmoud produced seventy stakes winners, he truly made his mark through the mares he sired. Northern Dancer, winner of the 1964 Kentucky Derby and Preakness Stakes and inducted into the Canadian Sports Hall of Fame; Sunday Silence, winner of the 1989 Kentucky Derby and Preakness Stakes; and Skip Away, America's Champion 3 Year Old Male in 1996 are just a few of the hundreds of successful progeny of Mahmoud. On September 8, 1962, Mahmoud died at the age of twenty-nine. He was buried in the equine cemetery on C.V. Whitney’s farm, which is now part of Gainesway Farm. Upon his death, a touching statement was issued and reprinted in the Thoroughbred Record (later to become the Thoroughbred Times):

“Mahmoud was very much an individual and he seemed to delight in being one. One of his idiosyncrasies was that he refused to be ridden across the Elkhorn Creek bridge though he was willing to go when led. Those of us who have grown fonder of Mahmoud with each of the passing years will miss him more than words can express…He knew human affection but he did not exploit it. He was never too preoccupied to walk to his paddock fence to receive a pat. He was kind and gentle, uncomplicated; any living thing was allowed in Mahmoud’s paddock” (Whitney Farm personnel, as recorded in The Thoroughbred Record, on the death of French-bred Epsom Derby winner Mahmoud).

Sonny Whitney was born to two of the great American families and built on his inherited wealth through a series of successful business opportunities. He invested in companies as diverse as PanAm Airways, the Hudson Bay Mining and Smelting Co., Limited in Canada and the Technicolor Corporation, and also financed the 1939 movie Gone With the Wind. He was the third generation of Whitneys to be entranced by thoroughbred horse racing, and the C.V. Whitney farm in Lexington, Kentucky (now Gainesway Farm), produced over 175 stakes winners. Whitney served as a director of Churchill Downs, and, in Saratoga Springs, founded the National Museum of Racing and Hall of Fame and served as its first president. He was recognized with the Eclipse Award in 1984 in recognition of his lifetime contribution to thoroughbred horse racing in the United States — an honor his widow, Marylou, would also be bestowed in 2010.

Marylou Whitney carried on as a successful owner and breeder, winning the 2004 Belmont Stakes with Birdstone against odds of 36-1 and denying Smarty Jones the Triple Crown. Her contributions to racing, especially in Saratoga, were recognized through membership in the Jockey Club (2011) and a place on the Saratoga Walk of Fame (2015). Shortly after her passing, she was inducted into the National Museum of Racing and Hall of Fame.