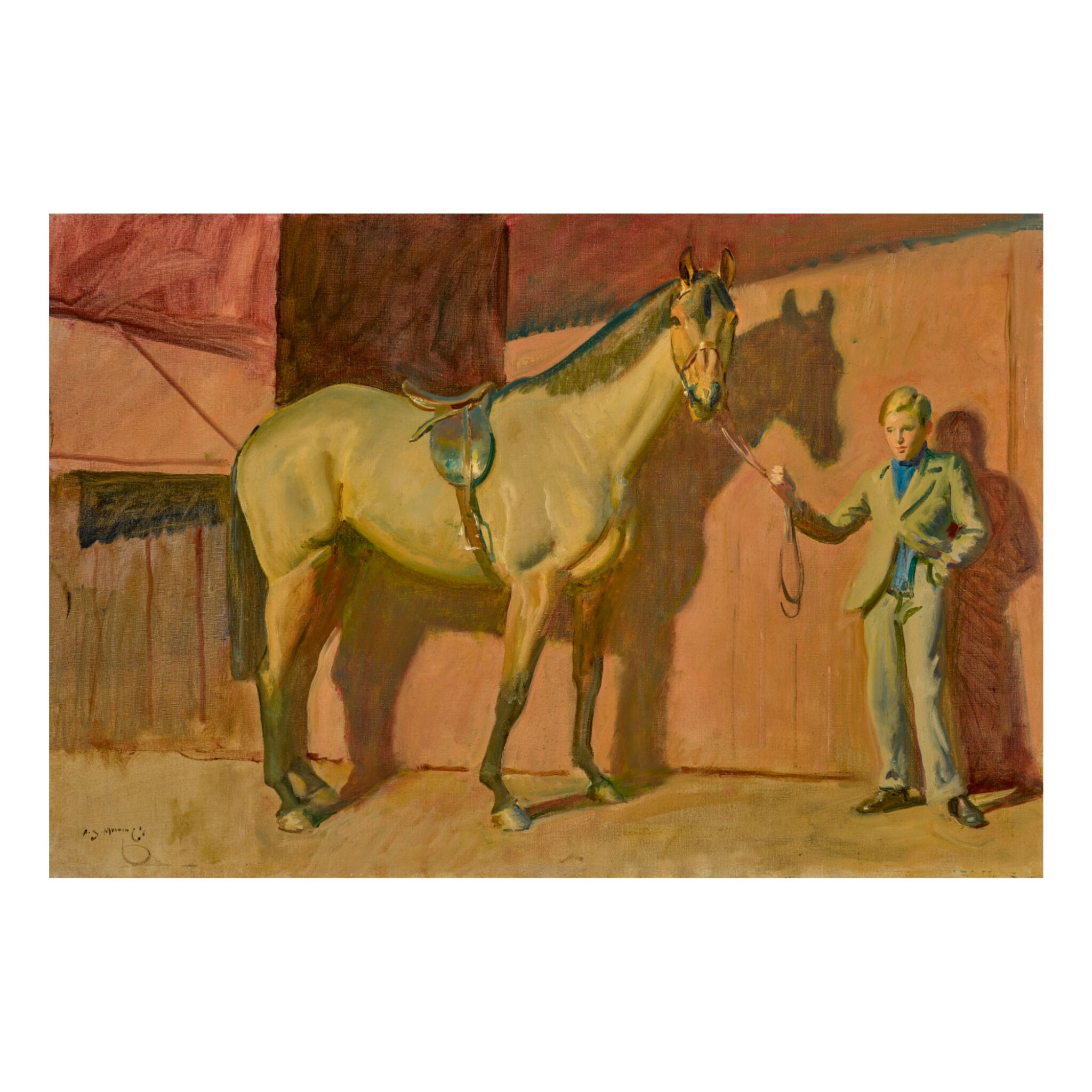 The following condition report was kindly provided by Simon Parkes Art Conservation, Inc.: Not examined out of the frame. This work is in beautiful condition. The canvas is unlined. A few small retouches have been added to the dark color in the center of the left side, to the left of the top of the saddle, and beneath the belly of the horse. The work may have never been cleaned, but cleaning is not recommended given the delicacy of the artist’s thinner pigment. The work should be hung as is.

Sir Alfred Munnings begins An Artist’s Life, the first volume of his three volume autobiography, with an account of his horses: “First, Anarchist, height sixteen and a half hands — the best I ever rode — a bold, clever unassuming and well-mannered horse, with a calm outlook on life. All jumps came alike to him and he never gave me a fall. Bred in Normandy by a Saumur instructor, he was jumping more than six feet in French competitions as a four-year-old” (Munnings, An Artist’s Life, p. 13). In the third volume of his autobiography, even as the artist praised Anarchist as “big, sleek, and fit," noting he “makes the most perfect model. A regular 16.2 ‘Chaser," he admitted that the spirited animal had thrown him, breaking two ribs, and stepped on his ankle (Munnings, The Finish, p. 73).

Anarchist was a favorite of Munnings’, appearing in a number of works individually and with other of his horses. He wrote of this particular composition:

"Anarchist…beautifully fit and clipped and all, mane water-brushed, is fetched out in a bridle and led to the wine-coloured garage doors; a hay-net is hung in front of him. He is placed square alongside the doors, his quarters coming against the door of the first box…The line keeps him there, and the net of hay keeps him busy… My canvas for my study is on the easel… I am hidden from view of passers-by in the road by a stripped blanket, and I start. It is difficult to place a horse on his feet as ever… I carry on, and on, and on… I go for the attitude…I paint him looking at me, a three-quarters side view, almost side, seeing into his chest…He is on higher round than I am; a good vies of a horse… and that fine, alert expression, the bright healthy eye. The clipped out colour. What modelling!" (Munnings, The Finish, p. 71-2)

During World War II, Munnings and his wife Violet moved to a hunting lodge near Withypool, in Somerset near Exmoor National Park, as a retreat. There, he met the three Delaney brothers, who he took under his wing, employing them as grooms and riders. Apparently Munnings was so appalled at the state of the boys' clothes that he had jodphurs, shirts and waistcoats tailored for them. Distinguished by their smart dress and tousled blond hair, the brothers appear in a number of works throughout the 1940s, such as Rufus and the Stable Boys (sold Sotheby’s, London, June 6, 2007, lot 421) and The Second Set (sold Sotheby’s, New York, November 22, 2016, lot 60). A second version of the present work was exhibited at the Leicester Galleries in 1947. My Horse Anarchist was lent by Mr. Whitney to the 1983 exhibition Alfred J. Munnings: Images of Turf and Field, which featured paintings owned by many of the most prominent families in the Sporting world, including Mr. and Mrs. Water Jeffords, Mrs. John Hay Whitney and Paul Mellon among others.

We are grateful to Lorian Peralta-Ramos for confirming the authenticity of this work, which will be included in her forthcoming Sir Alfred Munnings catalogue raisonné, and for contributing to the catalogue note.