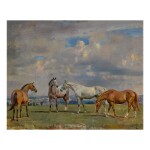 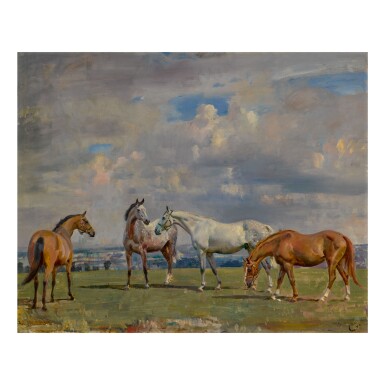 The following condition report was kindly provided by Simon Parkes Art Conservation, Inc.: Not examined out of the frame. This work is in beautiful condition. The canvas is unlined and still stretched on its original stretcher. The paint layer is stable. Under ultraviolet light, one can see a group of tiny dots in the lower sky to the left of the neck of the white horse and a few tiny dots in the center of the left edge. There do not appear to be any other retouches. The work should be hung in its current state.

Sir Alfred Munnings’ loved horses from the first time he attended a race in 1899. He wrote in the first volume of his autobiography, “I want to start like this with horses. Although they have given me much trouble and many sleepless nights, they have been my supporters, friends – my destiny, in fact. Looking back at my life, interwoven with theirs — painting them, feeding them, riding them, thinking about them — I hope I have learned something of their ways, appetite, outlook and ideas. I have never ceased trying to understand them…[They are] friends which have helped to place me where I now stand” (Sir Alfred Munnings, An Artist’s Life, Bungay, 1950, p. 14).

The present work depicts four horses grazing in a hilltop pasture. Munnings often depicted his own horses, such as Cherrybounce and Anarchist (see lot 441) in action, commenting throughout his autobiography on each animal's abilities as a model. This work is most likely Horses at Grass that was exhibited in 1925 at the Royal Academy, the year after Munnings’ successful trip to America, where he accepted many orders from wealthy patrons for equestrian portraits like the present work. While the identities of these horses are now unknown, the timelessness of the carefully organized composition, with the horses placed high on a hill set against a lush bank of clouds and each arranged carefully to highlight their individual traits, accentuates the artist’s abilities.

The first owner of Horses at Grass was John Dane Player (1864–1950), who was born to a Nottingham businessman. The family business grew from a dry goods shop and manure agent into John Player & Sons, among the first companies in England to offer pre-packaged tobacco. When John Dane’s father died in 1884, he left a thriving business, three factory blocks in Nottingham, and a carefully prepared will that dictated that John Dane and his brother William not take over the company until the age of 25. In 1901, John Player & Sons joined 12 other tobacco firms to create the Imperial Tobacco Company. Despite the fact that their company made up only £600,000 out of £11.9 million in capital, John Dane was appointed one of the original directors of the newly formed company as well as the advertising manager. John Player & Sons, under the leadership of the two brothers, built a reputation as an enlightened employer, with annual bonuses and paid vacation; between 1898 and 1928, the workforce grew from 1000 employees to 5000. Interestingly, a focus on sports clubs and associated comprehensive wellness, along with well-equipped grounds, set John Player & Sons apart.

We are grateful to Lorian Peralta-Ramos for confirming the authenticity of this work, which will be included in her forthcoming Sir Alfred Munnings catalogue raisonné, and for contributing to the catalogue note.