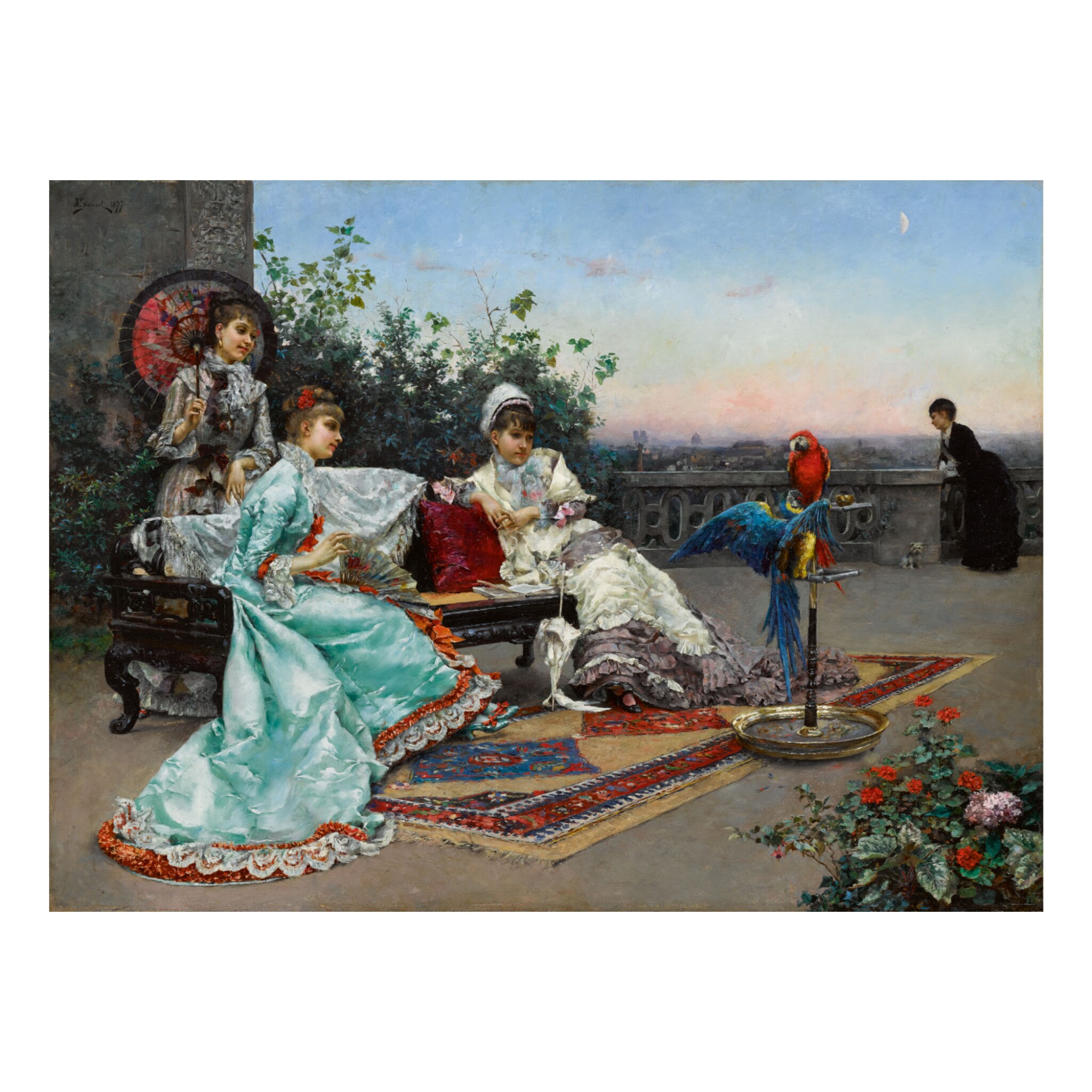 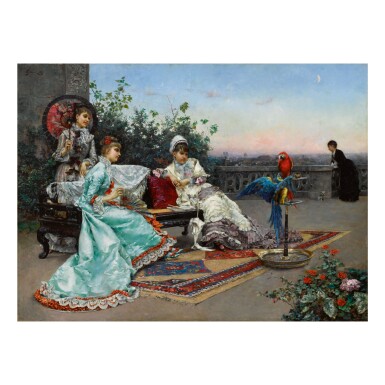 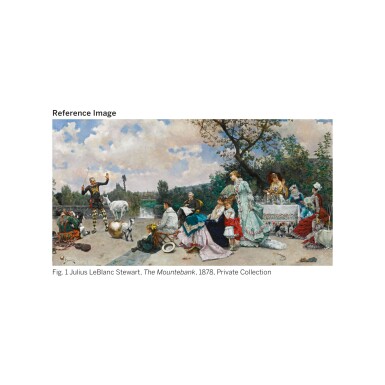 TWILIGHT ON THE TERRACE, PARIS

The following condition report was kindly provided by Simon Parkes Art Conservation, Inc.: Not examined out of the frame. This work is in excellent condition. It is painted on a large panel, which seems to be a single piece of wood. There are no reinforcements on the reverse. The panel is flat and the paint layer is stable. The work seems to be clean and varnished. No retouches are apparent under ultraviolet light except for a few addressing small cracks above the foliage above the figures, and around the head of the figure in black on the far right. The work should be hung in its current state.

Probably, Fichtenberg (acquired from the above, January 1878)

An American in Paris who rose to the celebrated ranks of other expatriate artists like John Singer Sargent, Julius LeBlanc Stewart enjoyed a long career as a society painter with a keen eye for the latest fashions. Stewart’s father was the collector and connoisseur William Hood Stewart, who encouraged his son’s talents from an early age and helped him form indispensable connections with contemporary artists. The family relocated to Paris from Philadelphia in 1865, and by the age of eighteen Stewart enrolled in the atelier of the Academic titan Jean-Léon Gérôme. Shortly after, he studied with the Spanish painter Raimundo de Madrazo. The Paris in which Stewart developed his painterly skills was not only a source of inspiration but also an important place of patronage, especially from the expatriate community. It was in this environment that Stewart’s career flourished, for many of his fellow Americans were not only part of his glittering, high society coterie, but also models for his paintings and important collectors of his work.

Twilight on the Terrace, Paris is one of Stewart’s earliest recorded works. It is dated 1877, the year after Stewart returned to Paris following two years of travels to New York, Philadelphia, and Cuba. By the late 1870s, the artist had begun to explore society painting with a focus on fashionable clothing and interiors, and was beginning to expand his compositions beyond a single figure. The present lot depicts four elegant women spending an evening on a terrace overlooking Paris. One of the women observes the street below while the rest are captivated by two colorful macaws, reflecting the artist’s interest in the exotic, which pervaded his other 1877 works (the artist owned parrots himself). The three women in the foreground wear the latest fashion trends from the 1870s— walking dresses with princess bustles, which were made popular by Alexandra, Princess of Wales. The dress modeled at far left, green silk with red ribbons, was so popular that similar examples appear in the works of James Jacques Joseph Tissot and Alfred Stevens. The influence of Madrazo is evident in the careful rendering of fabrics, which appear brilliantly luminous and tactile. Elements of japonisme, including the delicate silk fan and parasol and the black lacquered Chinese Export bench, reflect the eclectic style popular in late-nineteenth century Paris.

Twilight on the Terrace, Paris bears many similarities to one of Stewart’s most ambitious and important early works completed the following year, The Mountebank (1878, sold Sotheby’s, New York, November 3, 2015, lot 26 for $1,330,000, fig. 1). The Mountebank depicts close relatives of the artist, who would have been recognizable to the greater public as the artist’s family, as their fashion choices and trips to their villa in Cannes were frequently documented in local papers (Ulrich W. Hiesinger, Julius LeBlanc Stewart: American Painter of the Belle Époque, exh. cat., Vance Jordan Fine Art, New York, 1998, p. 15). The standing figure in green holding a fan is believed to be the artist's mother Ellen, who bears a striking resemblance to the figure in the present lot. The balustrade visible in the background of the present lot even appears be based on the terrace of the family villa in Cannes (Hiesinger, p. 25). The little dog, who appears in both compositions, may also be the family’s own. With Twilight on the Terrace, Paris, Stewart combined elements from his personal and social life to capture moments from his own experience during the Belle Époque.