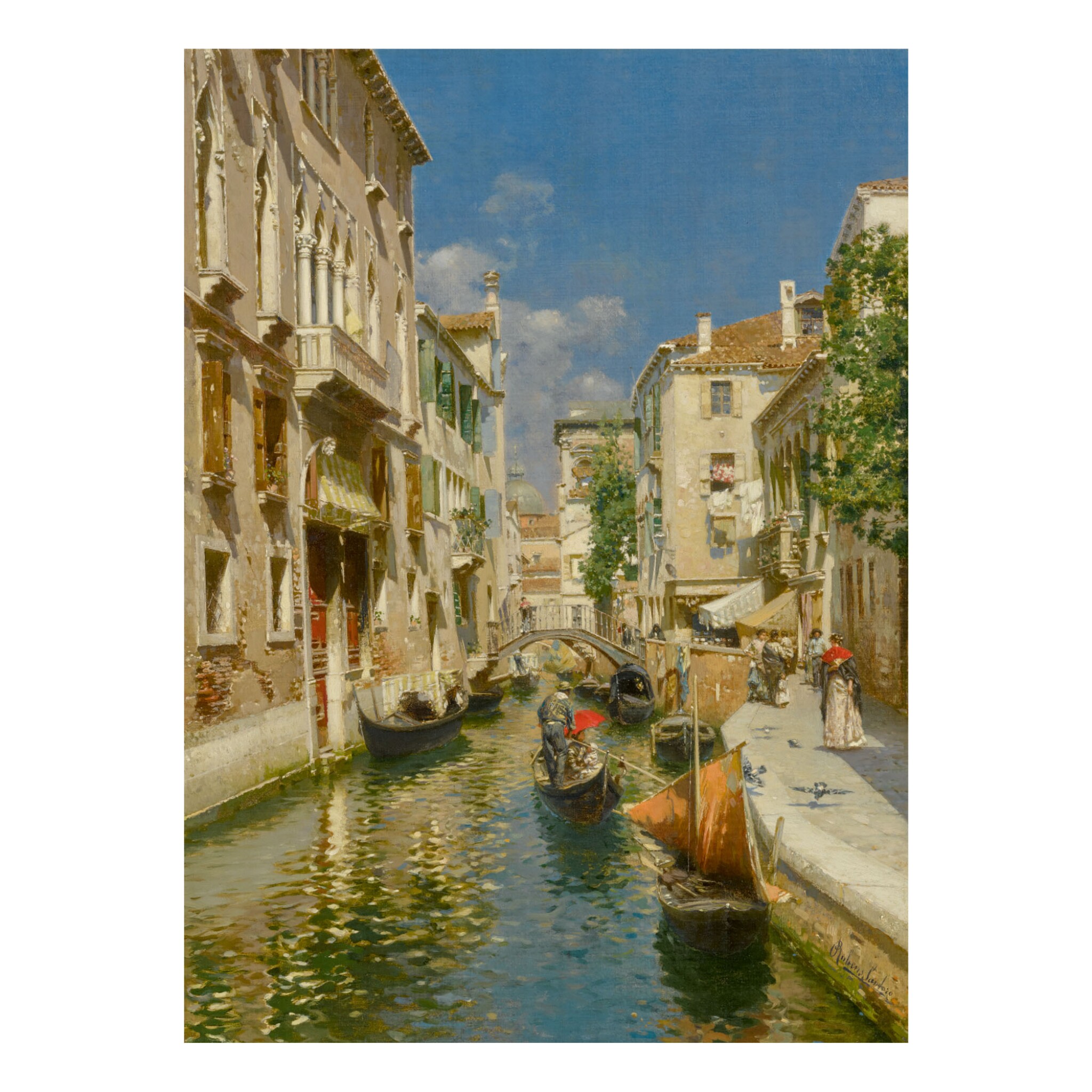 Not examined out of the frame. Lined. The work presents well with bright colors. Under UV: scattered, old, fine dashes of retouching visible in the sky. A small area of fine retouching on the underside of the balcony at upper left.

Rubens Santoro’s oeuvre celebrates Venice’s elegant architecture and magical urban setting. While he is most often recognized for his depictions of the grand facades of the city’s most majestic structures on the Grand Canal, Santoro did turn a more intimate eye on quieter streets and less-traveled waterways. The present view likely depicts the cupola of Chiesa di San Nicolò da Tolentino, glimpsed from the narrow Fondamenta del Forner on the rio de la Frescada. To the left is the Ca ’Bottacin, built in the fifteenth century by the Dalla Frescada family. The home passed through some of the most well-known Venetian families – the Corners owned the palazzo before it was home to Doge Pietro Loredan between 1567 and 1570 – but is now part of the Ca 'Foscari University of Venice.

Late nineteenth century visitors would also discover this unique atmosphere of faded beauty in The Aspern Papers (1888); written by Henry James, the American author who fell under the city’s spell, this novella takes place in a faded old palazzo filled with mystery. As James described, the palazzo “was a house of the class which in Venice carries even in extreme dilapidation the dignified name…. It was not particularly old, only two or three centuries.” James was captivated by the evocative areas of lesser-known Venice, which inspired him to experiment with new narrative form and style. Similarly, Santoro uses these overlooked neighborhoods to develop a new visual vocabulary of daily Venetian life: sheets drying in the breeze; subtle earth tones of crumbling building plasters; faded awnings which provide shade to passerbys; humble gondolas that serve as utilitarian transportation, not a touristic fancy. This is the Venice of the Venetians, who live every day amongst the magic of the city—unseen by many, yet sensitively recorded by Santoro’s brush.