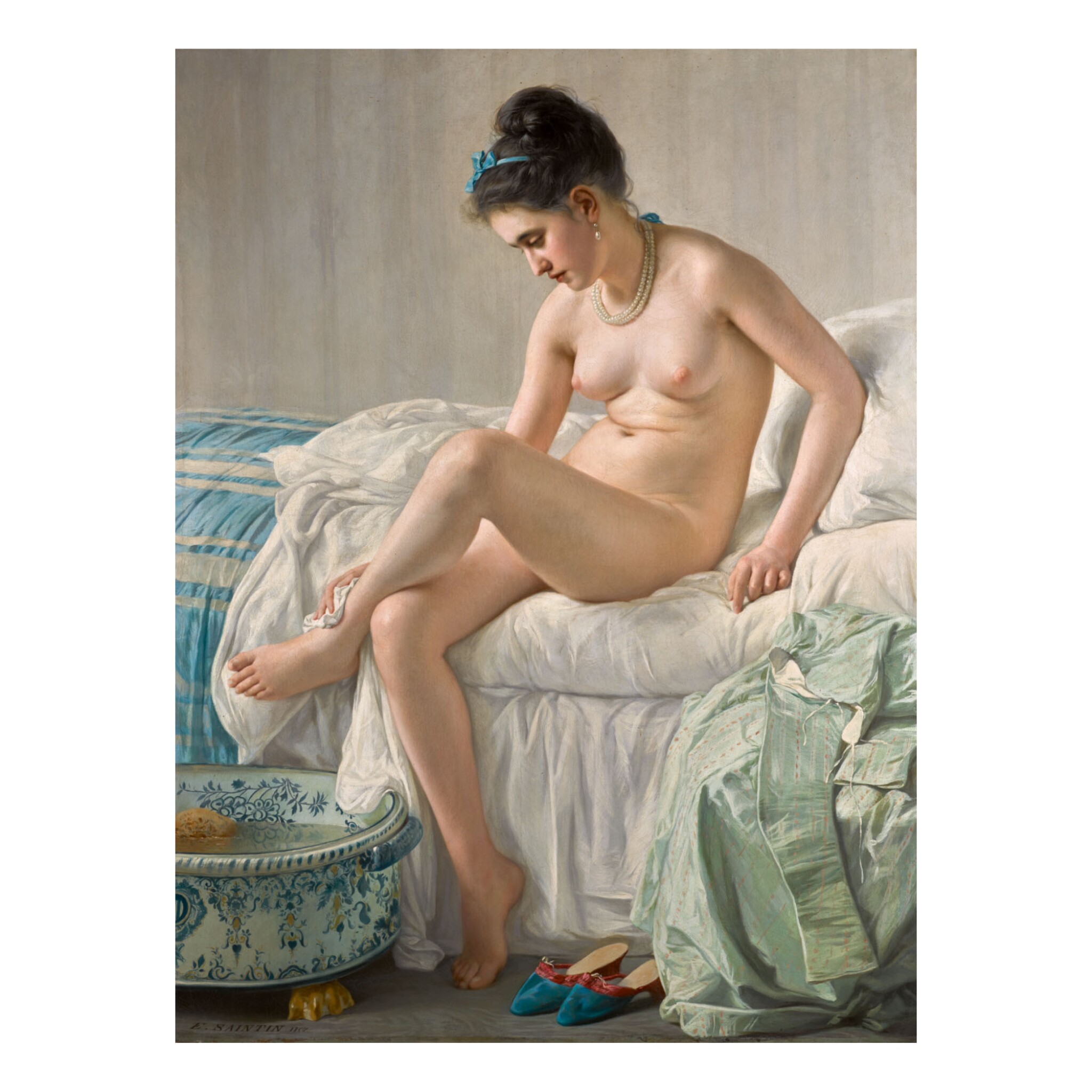 Not examined out of the frame. This work is in very good condition overall. The canvas is lined. The original texture to the paint is still quite lively. The painting may be slightly dirty, but the retouches that have been added are well applied and it is not recommended that they be removed. The grey background is in beautiful condition. There is a vertical line of retouches on the extreme left edge, which does not extend to the corners, but does run through the striped blue fabric on the left. The head and neck of the figure are in very good state, with only a few retouches to cracking in the forehead. In the torso, a few cracks in the right bicep, breasts and stomach have been retouched. A few other cracks have been retouched in her left forearm and elbow. The most concentrated area of retouching is the legs, where cracks have been retouched in the entire left leg and in the right inner thigh. The white sheet to the left of the figure has cracks that have been retouched, but the bed linens beneath and to the right of the figure show no retouches except for a few between the torso and the elbow. There are a few retouches in the heel of the slipper, and the inside of the basin in the lower left also shows a few retouches. The cracking to the paint layer is not unexpected, and it is recommended that the work be hung in its current state.

Eugène Stahl, Paris (acquired at the above sale)

Acquired from the above in 1983

Le lever was one of two paintings by Jules-Émile Saintin submitted to the Salon des Artistes Français in 1867. By that time, Saintin, already well-regarded in his field, had begun to focus on genre scenes, particularly of fashionable ladies. Le lever is delicately rendered but with Academic precision. The model bathes at the edge of her bed, having just risen. The viewer is privy to an intimate, private moment, further enhanced by the unmade bed and discarded dress with open corset. Careful attention has been paid to the other details on display: the blue satin shoes, a pearl necklace, and a French faïence water cistern, which can be dated circa 1720. Le lever embodies a sense of romance and nostalgia for the past. In this composition, Saintin has combined various artistic influences, no doubt the result of his education at the École des Beaux-Arts, where he enrolled at the age of sixteen. The high degree of finish and meticulousness of technique demonstrates the influence of early nineteenth century neoclassical and historical depictions of nudes by artists such as Jacques-Louis David, who taught Saintin's teacher at the École des Beaux-Arts François Édouard Picot, and Jean-Auguste-Dominique Ingres. The softness of the color palette, sensuality of the subject and charm in the details recall the work of François Boucher, the eighteenth century master of the Rococo, and a time and sensibility lost to the Industrial Revolution and political upheaval (fig. 1). The model's pose in Le lever can also be related to Baroque depictions of the goddess Diana and the Old Testament heroines Bathsheba and Susanna, most notably in the work of Rembrandt (fig. 2).

Though a subject steeped in European Academic tradition, Le lever also has a unique American connection. Five years after painting the present work, Saintin would use the same model in his Relief for the Sufferers of Chicago, painted in reaction to the devastating Great Chicago Fire of 1871 (1872, Chicago History Museum, fig. 3). Saintin had deep connections to America, having traveled to the United States in the 1850s and staying for nearly a decade. He was primarily based in New York, where he regularly exhibited at the National Academy of Design. The majority of his output was portraiture and a number of his commissions came from the French community in New York. Additional subjects included Ramsay Crooks, an early Rocky Mountain adventurer and partner in the Pacific Fur Company (1857, Wisconsin Historical Society) and various Native American warriors, with which he was particularly fascinated.

Beyond its beauty, Le lever has notable early provenance: the imperial collection of Napoleon III and Empress Eugénie. The present work was acquired directly from the 1867 Salon as part of the civil list of Napoleon III, the 25 million francs-per-year budget that, in part, allowed the Emperor to acquire works of art to fill his magnificent palaces. Le lever was purchased by way of a “stop” that was put in place on June 21 by Alfred-Émilien Nieuwerkerke, the Superintendent of the Arts during the Second Empire. Such “stops” allowed the court to reserve works in public exhibitions before other prospective buyers had the chance to purchase them. Le lever followed another painting by Saintin, Marthe, which was bought from the Salon as part of the civil list in 1866. For Napoleon, French art represented the glory of the French empire, further underlining his imperial cause during a century of political uncertainty. For Eugénie, an Empress of foreign birth, collecting French art was a means of promoting and supporting the culture of her new realm (Alison McQueen, Eugénie and the Arts: Politics and Visual Culture in the Nineteenth Century, Surrey, United Kingdom, 2011, p. 149).

The line between public and private was blurred for the royal couple; while the civil list was meant to fill public museums, it also helped create their private collections. Eugénie had 300 works in her collection, while Napoleon had over double that in his. After the fall of the Second Empire, Napoleon and Eugénie fled to England, where they set up a home at Camden Palace in Chislehurst. The Emperor died in 1873, leaving Eugénie and their sixteen-year-old son. In the years that followed, Eugénie fought tirelessly for her and her late husband’s personal collection of fine art and furniture in an ongoing legal battle with the French government. The primary issue was that, per a specific clause in the civil list document, any work of art or artifact purchased by the Empress but not hung in her quarters automatically became state property. She worked with lawyers to negotiate with the Third Republic government, who had little sympathy for the imperial family (McQueen, pp. 270, 301). Le lever was almost certainly wrapped up in this legal battle in France, though it was finally restituted to Eugénie in 1881 and sold the same year, along with 102 other restituted works, at auction at Hôtel Drouot in Paris to fund memorials and provide financial aid to her supporters.

Nearly 140 years after its restitution and Eugénie’s sale, the present work appears again at auction. To this day it remains a testament to a once magnificent collection inclusive of some of the best examples of French art.