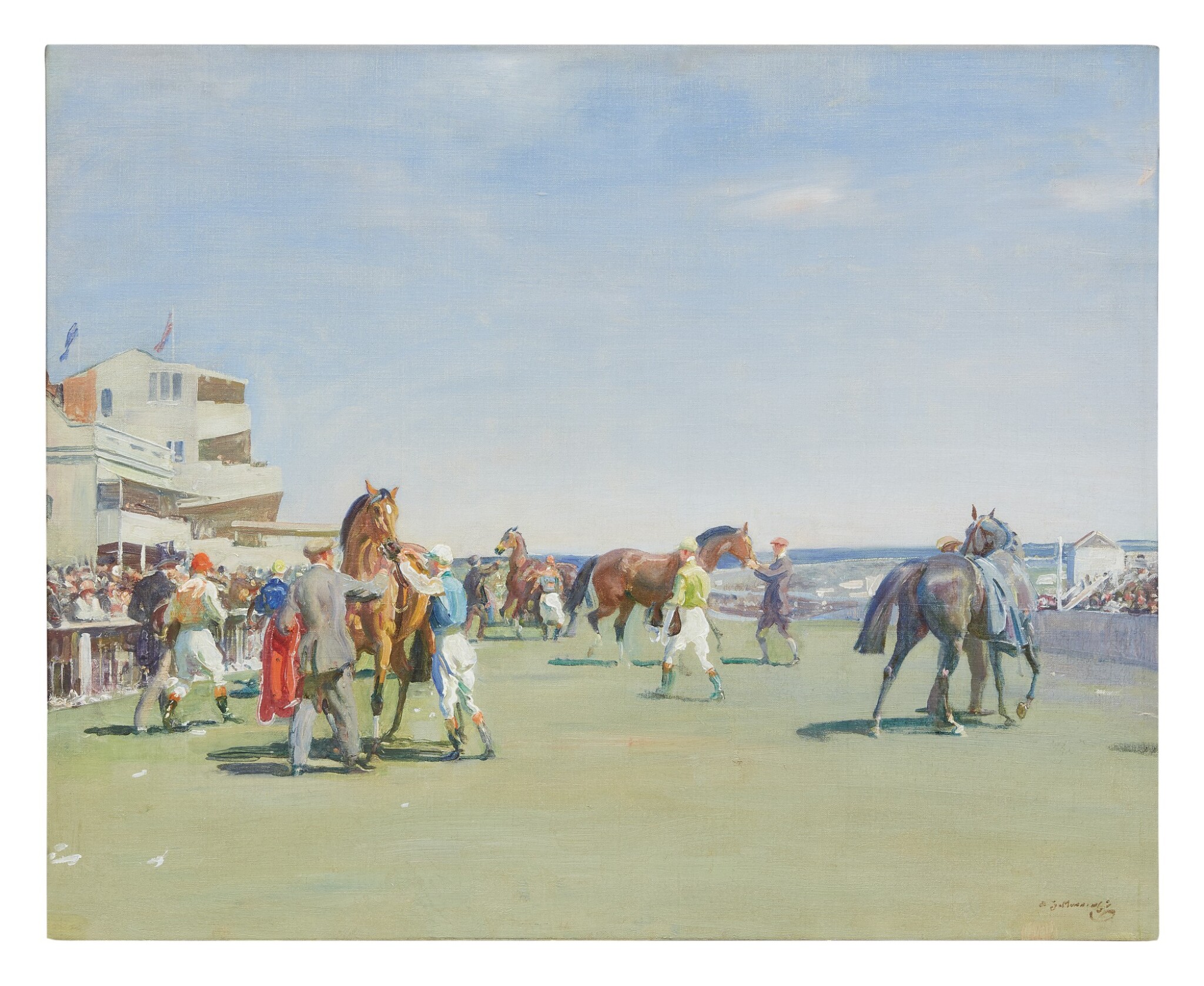 The following condition report was kindly provided by Simon Parkes Art Conservation, Inc.: This work is in good condition. The canvas is unlined. The tacking edges have been reinforced. The paint layer is clean and varnished. Retouches can be seen under ultraviolet light. There is an area of about 1 inch by 1 inch above the building on the far left that has received retouches. There is a small group of retouches in the lower sky to the right of the horse's head near the grandstand on the left, and a few tiny dots in the same horse. There are a few other small dots of retouching in the lower sky and in some of the darker horses, but these are all very minor. There are some marks that appear green under ultraviolet light in the upper right, upper left and lower left corners, which may conceivably correspond to older restorations, but no discoloration is visible to the naked eye here. The work should be hung as is.

Dr. Charles Henry ("Doc") Strub, California (acquired from the above circa 1940)

Unsaddling at Epsom, Summer Meeting (Study) depicts the frenzied and exciting moments at the conclusion of a race at famed Epsom Downs, southwest of London. In his autobiography The Second Burst, Sir Alfred J. Munnings stated that "'Unsaddling' was my best subject,” and he returned to the Downs often to observe the whirlwind of activity surrounding the races (Sir Alfred J. Munnings, The Second Burst, London, 1951, p. 297).

Munnings fondly remembered the planning of this composition and detailed the identities of the human and equine models used, explaining to the reader, "Epsom— a grand word— stirs memories of months of work following Epsom weeks in 1929 and 1930… I write this on the lawn, with the reproduction of the picture [Unsaddling at Epsom] taken from the wall of the library leaning again the stake of a standard rose" (Munnings., p. 296-97). The present finely-worked and finished study is strikingly close to the work Munnings presented at the 1931 Royal Academy Exhibition, save for a softer rendering of the sky and the position of the top-hatted figure at left, who, one supposes, walks with his jockey to congratulate the winning horse.

Munnings recounted that the bay at left is the mare by Glenesky, acquired from the Newmarket Sales as a three year old; she is unsaddled by Munnings’ favorite model, Tom Slocombe, who appears in blue and white silks, and is held steady by Rudge, a handyman who drove the horse-box and is dressed in a suit borrowed from the artist himself. Slocombe appears again in white and yellow silks, striding confidently across the center of the composition. The animated The Kaffir can be seen in the far distance as Chips is calmly walked towards the right side of the work. At far right, beautifully foreshortened, is the dark grey mare Magnolia, a favored horse with whom Munnings was pictured in the frontispiece of The Second Burst.

Munnings’ 1931 Royal Academy submissions were a trio of Epsom works— the larger version of the present work, Going Out at Epsom and an earlier version of A Winner at Epsom—and found extraordinary success among visitors and critics alike. The Illustrated London News commented "'Monet’s landscapes,' it has been said, 'are never general. He always paints a particular and unmistakable place.' Mr. Alfred Munnings, it will be noted, has not shrunk from identifying the scene of his racing subject." ("The Royal Academy, 1931: The 'Spirit of Place'; and Sport," The Illustrated London News, May 9, 1931, p. 786). Unsaddling at Epsom was reproduced in color prints by the following year, and continued to be printed by Munnings’ dealer Frost & Reed into the 1950s.

In 1924, Munnings spent six months in America on his first and only trip to the country. He painted portraits of East Coast elites such as the Phipps family and Robert Strawbridge, Jr., and upon his return to England continued to provide idyllic scenes of English country life to Mellons, Whitneys and other American luminaries. Munnings reputation as the pre-eminent modern painter of horses, the descendant of George Stubbs and Benjamin Marshall, was firmly established in America.

By 1941, the present work was acquired by Dr. Charles H. Strub, well-known for the impressive collection he assembled for the Los Angeles Turf Club at Santa Anita Park. This work was included in Dr. Strub’s private collection, and is appearing on the market for the first time in over 70 years.