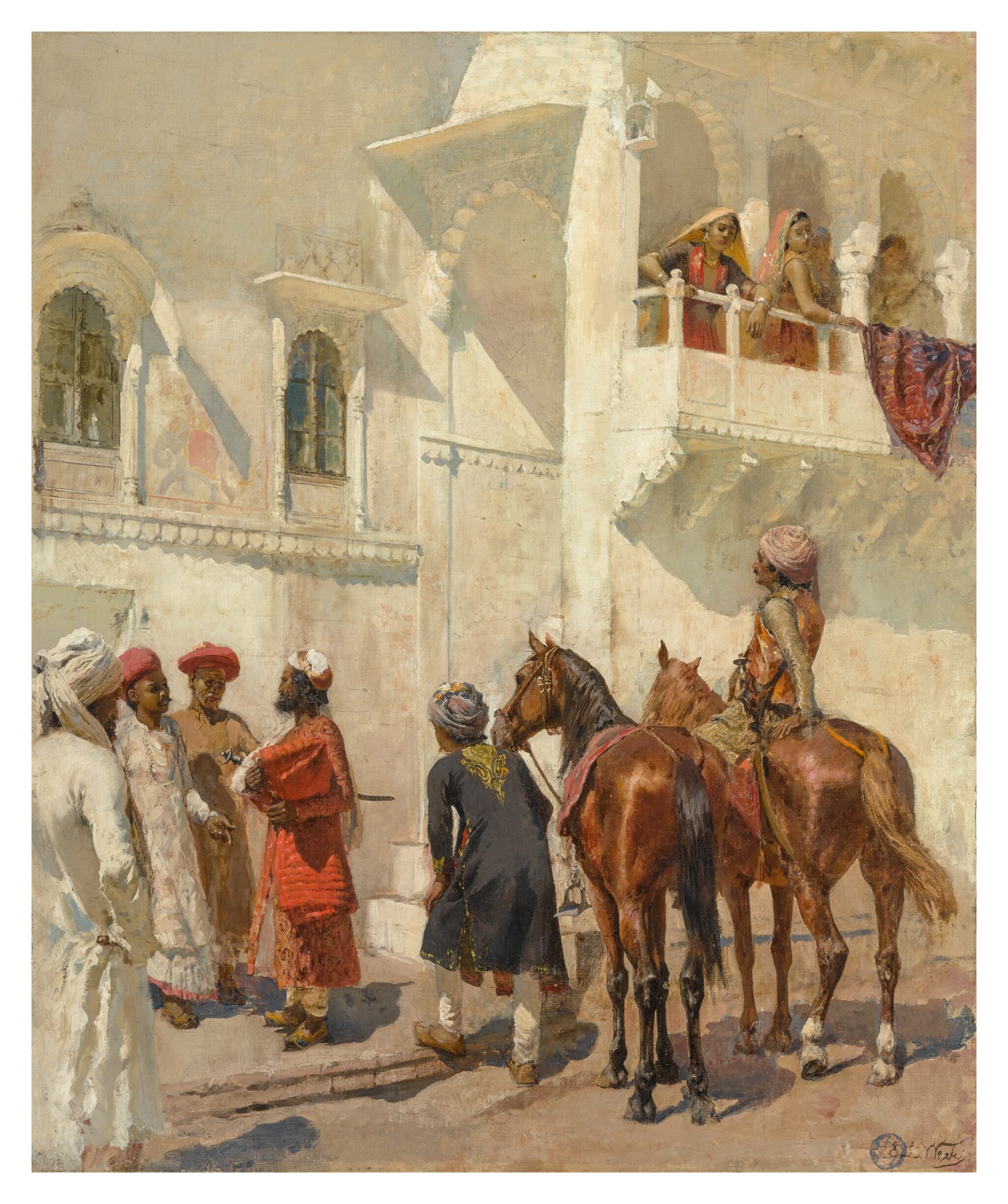 This lot will be included in the forthcoming Edwin Lord Weeks catalogue raisonné from the Ellen K. Morris archives and now in preparation by Edward Levin.

This work is in very good condition, but the restoration is misleading. The canvas has been lined with wax onto a transparent piece of Mylar. While this lining allows one to see the reverse of the original canvas, it also shows the two or three breaks in the upper quarter of the picture and a few small holes elsewhere. The tacking edges are intact and have been reinforced with a heavy linen. The canvas is stretched on a mechanical stretcher.

The retouches that have been applied are very heavy handed. The most notable restoration is in the white vertical column to the immediate left of the woman in the balcony in the upper right, where a very thin line of damage has been very broadly and poorly restored. The condition is generally very good throughout the figures and animals, but there is an overly broad restoration in the lower left. There are a few retouches in the haunches of the horse nearest the center. There is another poorly applied retouch in the upper center, which addresses a small paint loss. The work would certainly respond well to proper restoration.

Edwin Lord Weeks was primarily interested in depicting everyday scenes from the places he traveled, and the present work demonstrates his keen eye for detail in addition to his enthusiasm for the culture in which he immersed himself. The artist presents a moment of respite and calm under the hot sun. a scene he likely witnessed many times throughout his travels to India and surrounding regions. A group of men stand at the ready with the horses, though it is unclear if they are about to embark for a hunt or if they have just returned. Before the group is an exquisite white marble building, with intricately carved and frescoed walls (such as the elephant between the two windows). A group of ladies, their colorful garb a contrast to the white screened porch on which they stand, seek shade and observe the men below. Though the exact location is unknown, it is likely India, as Weeks’ Moghul "star-in-circle" signature (below his name) appears in a number of his paintings of India during the 1880s.

Weeks was one of the most important American Orientalist painters of the late nineteenth century and, unlike many of his peers, his work reflects his travels to the regions he depicted. Weeks' first trip to India in 1882-83 proved to be an immense source of inspiration and he returned to the country intermittently over the following decade. In 1892, Weeks traveled overland from Turkey to India by way of Persia and published a travel account in serial format for Harper’s Bazaar magazine, titled From the Black Sea through Persia and India, which earned him fame and widespread artistic recognition in Europe and America. Throughout these trips, he was an indefatigable worker, known to set up a camp stool in the midst of a busy market to record local models. Weeks also purchased photographs, in addition to taking and developing his own, which he frequently used to record the architectural details of the cities he encountered during his travels. As Gerald M. Ackerman writes: "His ability to draw ethnic types without condescension or caricature, his skill in putting together grand compositions, his ability to tell convincing tales – all these skills make his paintings compelling. His wonderful eye for architecture, not just for its stylistic niceties, but also for its presence in sunlight, transmits a view of the past that has to be accepted as true" (Gerald M. Ackerman, American Orientalists, Paris, 1994, p. 244).