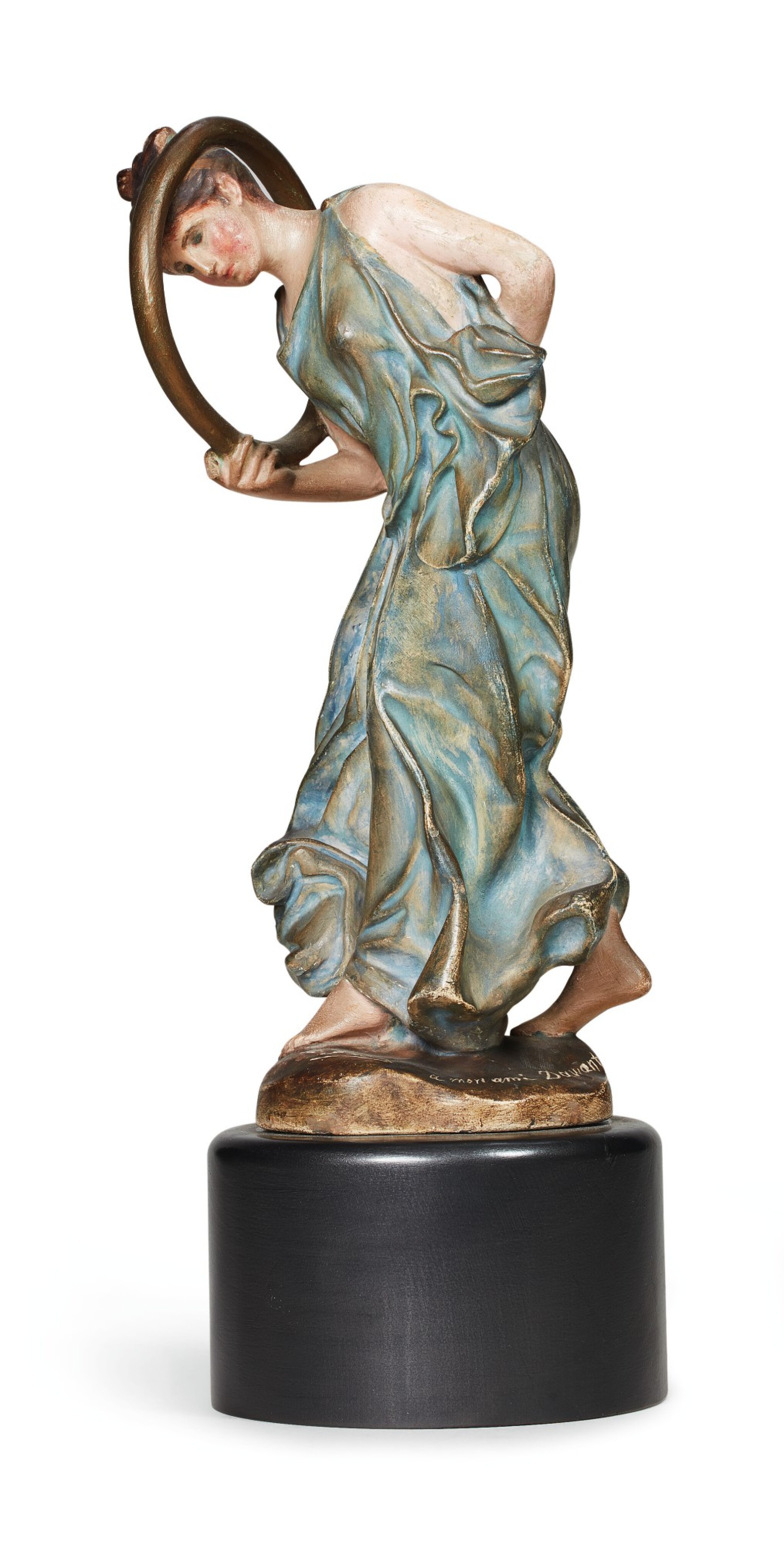 signed J. L. Gerome and inscribed a mon ami Dawant (on the base)

This work has standard surface dirt and dust and very minor loss to polychromy concurrent with age. There are some small areas of refreshed polychromy. The hoop and part of her proper right arm have been restored. There are very well restored breaks in her head. There is some rubbing to the raised edges of the folds of her costume and minor rubbing at the top of her head. There is a pinpoint-sized pit to her proper left shoulder. There is minor retouching to her upper proper left arm and proper left torso, both only slightly visible to the naked eye. The work is beautifully modelled and in otherwise good, stable condition

Thence by descent to the heirs of the above

In 1878, the discovery of a trove of ancient terracotta statuettes at the archaeological site of Tanagra at Boeotia, Greece, captured the public’s imagination. Dynamic, brightly colored, and produced for mass consumption, these diminutive figurines held particular interest for contemporary artists, including the leading French academic painter Jean-Léon Gérôme (1824-1904). Indeed, the Tanagra figurines would preoccupy and influence the celebrated artist for the remainder of his career, and would directly inspire the creation, in 1891, of The Hoop Dancer, Gérôme’s most popular and widely reproduced sculpted work. The present sculpture, the only painted plaster version of this subject to have survived in Gérôme’s oeuvre, addresses every major facet and phase of the artist’s professional interests, from classicism and archaeological reconstructions to Orientalism and commercial pursuits. So too, in its delicate coloring and lithesome pose, The Hoop Dancer offers insights into Gérôme’s views on a wide variety of contemporary aesthetic debates and the role of sculpture in the modern age.

Uniquely among his sculpted works, Gérôme envisioned the subject of the Hoop Dancer as both an independent artwork and as part of a larger ensemble. In 1890, plagued by accusations that he could not render movement or emotion in stone, he produced Tanagra, a life-size sculpture that featured two interpretations of the classical and idealized female form (fig. 1). The seated figure, a monumental nude, stretches her hand outward, stoic, sober, and still. Balanced on her palm is a graceful Hoop Dancer, turning and twirling in a cascade of seemingly liquid Grecian robes. Her head dips into a golden ring that she cradles in one hand; in the other is a golden ball. Gérôme’s investigation into the rhythmic movement of the female body and the contortions of the human form, perfected in this work, had, in fact, begun years earlier, in a series of paintings depicting the ghawazee, or Egyptian dancing girls, and in numerous other Orientalist pictures inspired by his Middle Eastern travels. The similarities between these lyrical works and the figure of the Hoop Dancer suggests a previously unrecognized progression in Gérôme’s art, and the close relationship that existed for the artist between painting and sculpture, and between Orientalism and the classical world.

Since 1878, Gérôme had made sculptures of subjects taken from or inspired by his painted works, and, as early as 1859, had sculpted figurines that served as maquettes for his later pictures. In Painting Breathes Life into Sculpture (Sculpturae vitam insufflate picturae) (fig. 2), three versions of which exist, the purpose of this interplay is clear. The painting demonstrates the ancient tradition behind the artist’s own (controversial) method of polychromy, or tinting sculpture by hand, and validates his practice of painting genre scenes set in the classical world. Just as the woman paints a series of twelve terra cotta figures, all in the form of a Hoop Dancer, so Gérôme produced numerous versions of this work for the market with the famed art dealer Adolphe Goupil, in two different sizes, a variety of media, and, as the present sculpture importantly suggests, with polychromed options as well. The subject is not simply an archaeological reconstruction of classical pursuits, therefore, but a means to historicize and justify Gérôme’s increasing interest in hand-painting his sculptures, and to provide a tongue-in-cheek commentary on his own manufacture and commodification of marketable and decorative goods.

Though perceived as a humbler medium than marble, bronze, or stone, plaster was of critical importance for Gérôme’s sculpting process and technique. The artist typically did his modeling in this medium, making life-size and remarkably life-like works from the model, to be used for his finished sculptures. These plaster “masters” – a source of great pride for the artist, who often photographed them together with the model to demonstrate their accuracy – were given to professional marble carvers to be copied, under his supervision, or to professional foundries, when a bronze was desired. For those sculptures meant for mass consumption, Gérôme often made and reserved special plaster casts for his friends, from the same mold as the bronze, but decorated or personalized to become works of art in their own right. The present work, both finely painted and inscribed by the artist, was given by Gérôme to his student and colleague Albert-Pierre Dawant (1852-1923). (A black and white photograph of Dawant will be sold together with the present lot.)  Later, it was purchased by Professor Gerald Ackerman (d. 2016), author of the artist’s catalogue raisonné. As the only remaining polychromed version of this subject, this pristine plaster Hoop Dancer is an invaluable record of Gérôme’s practice and intent.

The model for The Hoop Dancer, and for Tanagra, is debatable, but may have been one of Gérôme’s daughters or his mistress.

This catalogue note was written by Emily M. Weeks, Ph.D., author of the revision of the artist’s catalogue raisonné, currently in progress.