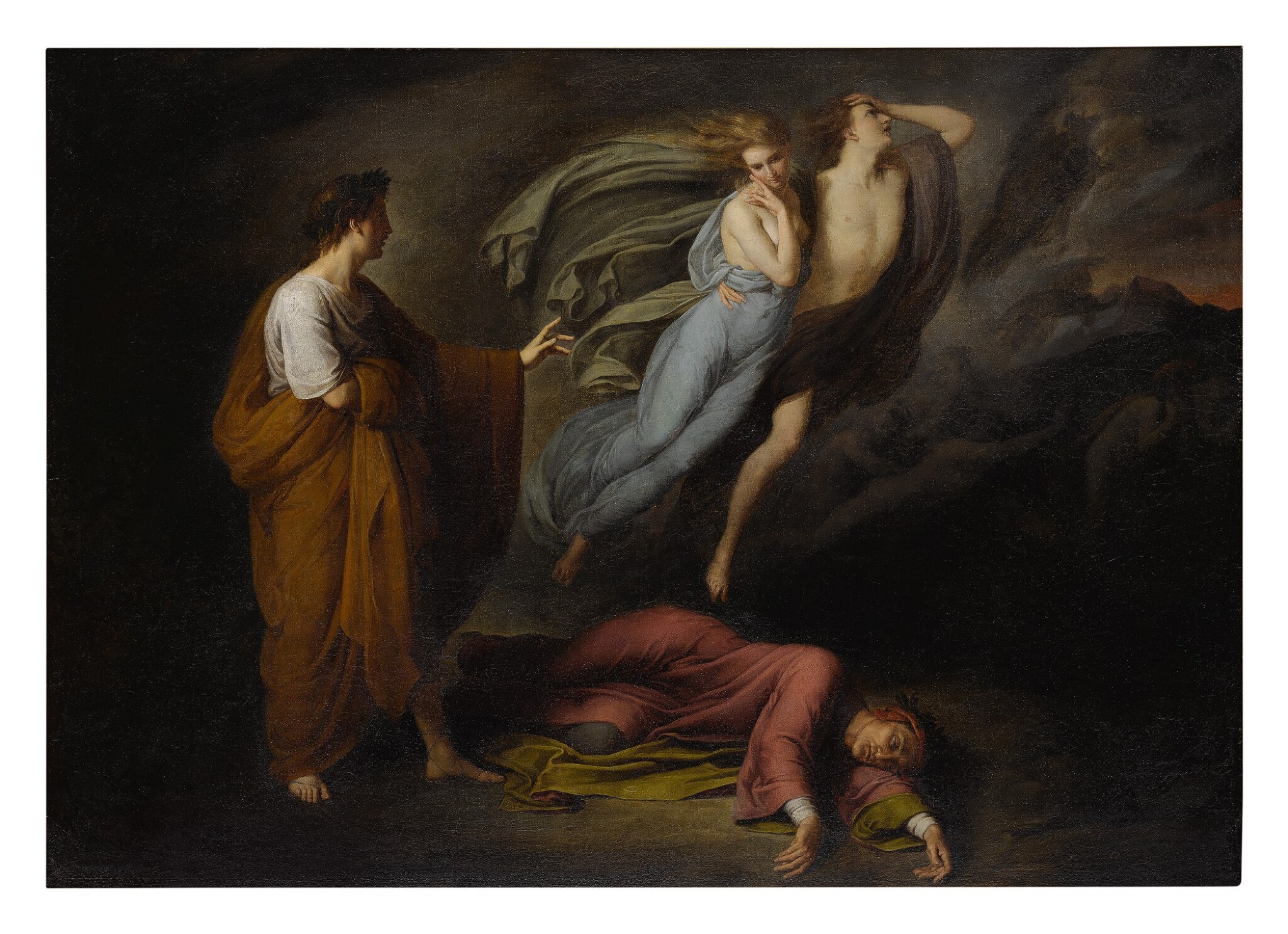 Please note that there is an updated attribution for this lot.

Dante and Virgil meet Francesca da Rimini and Paolo Malatesta depicts a scene from Dante Alghieri’s Inferno, the fourteenth century epic poem that tells of his journey through the rings of Hell, guided by the Ancient Roman poet Virgil. In the present work, the Dante and Virgil look upon the tragic figures of Francesca da Rimini and Paolo Malatesta, ill-fated lovers who float in the stormy seas of the second circle of Hell, where souls overcome by lust in life languish in death. Francesca was the daughter of the lord of Ravenna and Dante’s contemporary. Around 1275, she was forced to marry the crippled Giovanni Malatesta, lord of Rimini, in order to secure peace between the two families. Francesca soon fell in love with her husband’s handsome younger brother, Paolo. They carried on their affair for a decade until, in 1285, they were murdered by Giovanni. In the Inferno, the couple are condemned to float in an eternal whirlwind, forever swept through the air just as they allowed themselves to be swept away by their passions. In this work, Dante calls out to the lovers who briefly pause before him. Francesca shares a few oblique details of her life and Dante remembers her and identifies the couple. Francesca shares with Dante and Virgil the story of the couple’s damnation, which affects Dante so strongly that he faints out of pity.

Love, which in gentlest hearts will soonest bloom

seized my lover with passion for that sweet body

from which I was torn unshriven to my doom.

Love, which permits no loved one not to love,

took me so strongly with delight in him

that we are one in Hell, as we were above.

Love led us to one death. In the depths of Hell

Caina waits for him who took our lives.

This was the piteous tale they stopped to tell.

The present work is a variant on the subject depicted in Scheffer’s most famous composition, Francesca da Rimini and Paolo Malatesta appraised by Dante and Virgil. That work was first exhibited at the Paris Salon in 1822 (current location unknown) where, despite a positive reception, it was physically and commercially overshadowed by Eugène Delacroix’s The Barque of Dante, which hung in the same room. Scheffer returned to the stirring subject multiple times over the next thirty years, and different interpretations of this scene are in the Louvre, Paris; The Wallace Collection, London; the Hamburger Kunsthalle, Hamburg, Germany; Carnegie Museum of Art, Pittsburgh; and Cleveland Museum of Art.