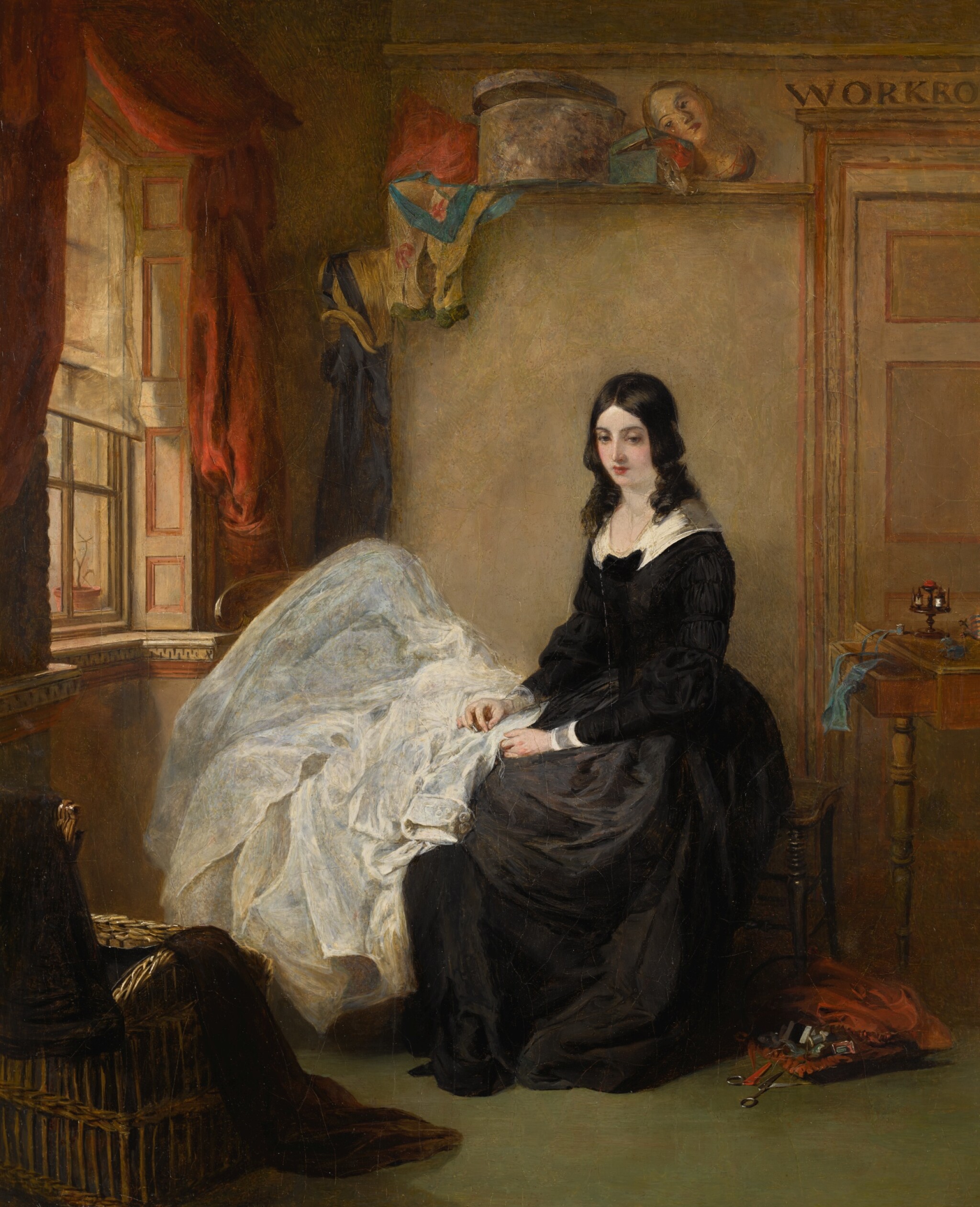 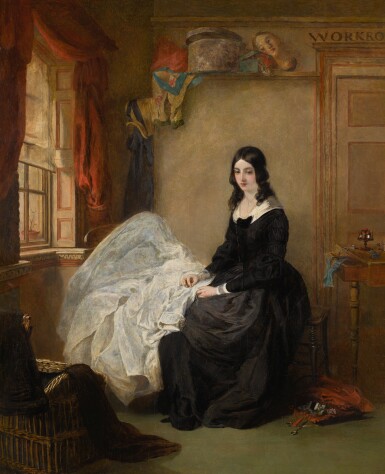 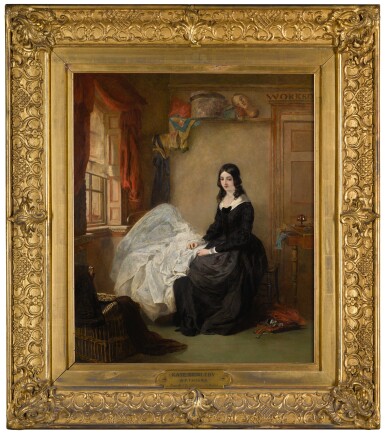 Bears the signature of Charles Dickens on an old label attached to the reverse.

The picture has been lined which is providing a stable structural support. There is a craquelure pattern across the surface but the paint is stable and has been recently consolidated and stabilised.

There are extensive retouchings across the surface to infill craquelure and replace paint loss at the edges of the composition in particular - the figure herself has only light retouchings.

Bears the signature of Charles Dickens on an old label attached to the reverse.

In the 1840s Charles Dickens (1812-1870) was a literary phenomena with a popularity that even Frith noted in 1887, 'would be difficult to convey to the present generation.' (W.P. Frith, My Autobiography and Reminiscences, in three volumes, 1887, Vol I., p.102.) His characters were almost celebrities in their own right and Kate Nickleby’s name was used for a racehorse and a ship. Kate is one of the central characters from his novel Nicholas Nickleby, which was first published in serial form between 1838 and 1839. Frith's painting of this beloved character takes 'a scene at Madame Mantalini's — where Kate figures as a workwoman — the point chosen being at the moment when her thoughts wander from her work, as she sits sewing a ball-dress spread upon her knees.' (Ibid, pp.103-4) The title of the work room is visible above the door as are the tools of her appointment spilling out of a bag to her left.

The work is particularly important because the choice of subject came from the author himself and represents one of a pair of Dickens' characters commissioned by Dickens. After seeing Frith's painting of Dolly Varden from Barnaby Rudge, Dickens wrote to Frith on 15 November 1842 from his Devonshire Terrace address:

'My dear Sir, — I shall be very glad if you will do me the favour to paint me two little companion pictures; one a Dolly Varden (whom you have so exquisitely done already), the other, a Kate Nickleby.

P.S. — I take it for granted that the original picture of Dolly with the bracelet is sold?' (Ibid, p.103)

Frith felt the huge honour that had been given him and he recalled: 'My mother and I cried over that letter, and the wonder is that anything is left of it, for I showed it to every friend I had, and was admired and envied by all.' (Ibid, p.103.) Frith was nervous about the painting because he knew how particular Dickens was about the depiction of his novels and that his career could be boosted by the painting’s success.

‘The pictures were finished, and a letter was written to say so. See me then in hourly and very trembling expectation of a visit from a man whom I thought superhuman. A knock at the door. "Come in." Enter a pale young man with long hair, a white hat, a formidable stick in his left hand, and his right extended to me with frank cordiality, and a friendly clasp, that never relaxed till the day of his untimely death. The pictures were on the easel. He sat down before them, and I stood waiting for the verdict in an agony of mind that was soon relieved by his cheery — " All I can say is, they are exactly what I meant, and I am very much obliged to you for painting them for me.’ (Ibid, p.104.)

The visit was followed by a further one from the author, accompanied by his wife Catherine Dickens (1815 –1879), and his sister-in-law Georgina Hogarth (1827 – 1917) who both approved of the paintings. 'Tis enough to say the ladies approved,’ Frith recalled and ‘Dickens gave me a check for forty pounds for the two pictures.’ (Ibid, p.105) Dickens was so pleased with the painting that he succumbed to the request of the National Art Union of Ireland to allow the painting to be engraved for their subscription series. The painting went to the engraver William Holl (the Younger) (1807 - 1871), where is remained for sometime prompting Dickens to write an amusing note:

"E N , if you will return to your disconsolate friends in Devonshire Terrace, your absence in Ireland will be forgotten and forgiven, and you will be received with open arms. Think of your dear sister, Dolly, and how altered her appearance and character are without you ! She is not the same girl. Think, too, of the author of your being, and what he must feel when he sees your place empty every day!" October 10, 1848.’ (Ibid, pp.105-6.)

The note was first publicly recorded in the Pall Mall Gazette in 1884 and later by Frith in his autobiography. After the engraving was completed, Frith didn’t immediately receive the painting, which instead travelled to Ireland for exhibition at the offices of the National Art Union of Ireland in August 1848: 'The original painting by Frith so kindly lent to the society by Mr. Dickens, has arrived, and now lies at the office for the inspection of the public,' recorded The Evening Packet. The next month the painting travelled to Belfast for exhibition before returning to Dublin, where The Dublin Weekly Register recorded that 'Everywhere, and amongst all persons of every age and taste, 'Kate Nickleby gets the same commendations.'

The work finally made it back to Dickens and we can see it later on the wall of his dining room at Gad’s Hill, where he moved in 1857. After his death a major sale of the author’s paintings and objects d’art were sold at Christie’s on 9 July 1870 in a sensational sale that was widely reported. Kate Nickleby at Madame Mantalini's sold for 200 gns. a large sum for this charming, but important cabinet painting.

We are grateful to Mark Bills for compiling this catalogue essay.