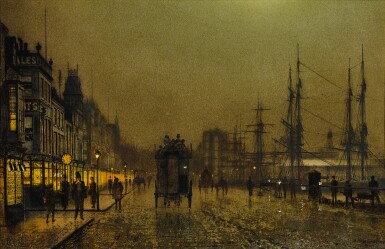 The painting is unlined and evenly tensioned on its original stretcher, there is very little distortion to the painting. The bond between paint, preparation and canvas is good and the picture is structurally stable.

Examination under UV light shows a small restoration to the right of the central carriage, and to a point on the horizon to the left of it. There are also some minor scattered touches to the sky and buildings. UV examination also reveals patches of old oil varnish which show as lighter green areas not visible in normal light.

The overall condition of the painting is therefore very good.

Richard Green, London, where purchased in 1997 by the present owner

Born in Leeds in 1836, Grimshaw’s masterful capturing of industrial cities is inherently rooted in his upbringing. He painted many of the cities made great during the heyday of the nineteenth century, including Liverpool, Leeds, London, Hull and Glasgow. While the suburban streets painted across Yorkshire remain relatively anonymous, Grimshaw associated his industrial works with their locations from the offset. Beginning to paint the dockside motif around 1875, Grimshaw chose Liverpool and Glasgow due to their importance in the high Victorian period. Both locations were important ports that linked Britain with the Empire, rapidly modernising and embracing the Industrial Revolution because of this. Glasgow provided more than half of Britain’s shipping tonnage and a quarter of all locomotives worldwide in the 1870s, leading to it being named “the Second City of the Empire”.

Having suffered considerable financial strain in 1879, due to the early calling-in of a loan, Grimshaw sold his home in Scarborough and returned to Knostrop Hall, where he rethought the subject of his paintings. An increase in the production of his urban and dockside scenes ensued, as he took advantage of those who prospered from trade and shipping who were keen to see their livelihood’s, and the industrial strength of the British Empire, immortalised in art. Thus, Grimshaw capitalised upon the lamplit city commercialism and fierce civic pride that marked this period in Glasgow. Providing a realistic snapshot of contemporary life, albeit without an emphasis on the poverty and hardship that is synonymous with city living in the Victorian era, Grimshaw found a new audience who were equipped financially to invest in art that represented their way of life in a modernising city.