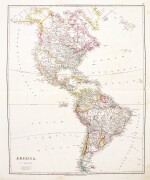 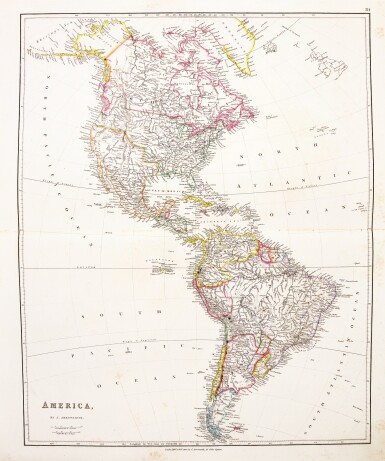 The London Atlas of Universal Geography, exhibiting the Physical & Political Divisions of the Various Countries of the World. London: J. Arrowsmith, 1858 [1864]

Folio (548 x 368mm.), engraved title with dedication, dated 1858, engraved leaf with preface and list of contents, 50 double-page engraved maps, hand-coloured (mostly in outline), EXTRA-ILLUSTRATED with a suite of 12 Arrowsmith maps, on 14 sheets, one map of the United States by James Wyld, 1845, the maps variously dated between 1832 and 1864, 2 folding, most tabbed at right margin with printed names for identification, contemporary half calf gilt, the map by Wyld slightly shorter, dampstaining with minor marginal loss (mostly to tabs), map 33 trimmed, map 24 with folding part detached, occasional tears, folds or staining, binding worn, sold not subject to return

The London Atlas is one of the finest English nineteenth-century atlases published in England, compiled and published by John Arrowsmith (1790-1870), a leading English mapmaker and publisher. Arrowsmith was a founder member of the Royal Geographical Society, and nephew of Aaron Arrowsmith, another outstanding English cartographer. Arrowsmith continued to revise and update his maps after their first appearance. The London Atlas was first published in 1834; a new edition appeared in 1842. The atlas continued to be re-issued afterwards.