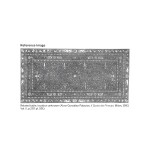 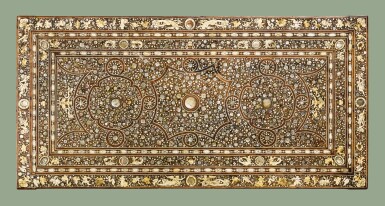 with a rectangular top inlaid with engraved mother-of-pearl and bone, on later straight legs with iron stretchers

In overall good conserved condition. Some minor chips to the walnut across the surface and along the edges to the table. Minor losses of small pieces of mother of pearl, as to be expected with age and use. One area off from the center of the tabletop with residues of wax. Another area with darker walnut. Signs of shrinkage as visible at both ends of the table. At each end of the table, evidence of a break, across the depth of the table, which has been restored and reinforced but would benefit from further attention. Evidence of old worm, which no longer appears to be active. Generally with old marks and scratches consistent with a age and use. A charming piece.

This impressive table with intricate marquetry decoration in mother-of-pearl and bone belongs to a group of Venetian furniture employing a similar technique and sophisticated decoration with tendrils, grotesque masks and figures of Islamic inspiration. This group comprising tables, cabinets and caskets from the early 17th century illustrate one of the most elaborate and innovative productions in Venetian cabinetmaking of the time.

This type of table has its origins in early pieces of furniture which were made so that they could be easily dismantled and transported: tables which were essentially simple tops resting on trestles. In particular, one should consider the table discussed in Alvar González-Palacios, op.cit., 1984, p.328, fig. 696 (sold Ader Picard Tajan, Paris, 19 March 1982, lot 85) and those in Alvar González-Palacios, op.cit., 1993, Vol. II, pp. 293-297, pl. 584-592. Dated from the beginning of the 17th century, some of these tables interestingly bear the same three letters C, impressed for Cardinal Carlo Conti (1556-1615).

Interestingly, Alvar González-Palacios in his essay “A Venetian mystery” writes on the connection between the tables and their manufacture: one single Venetian workshop, at the source of the productions of these inlaid pieces. Although the name of this workshop still remains unknown, it demonstrates an acute sense of detail and a sense of elegance in the rendering of the natural world.

Related tables with related marquetry decorations as the present example can be recorded:

- one in the collections of Arundel Castle, home of the Dukes of Norfolk

- one sold Sotheby’s London, 9 December 1994 (£17,825), lot 73, with the coat-of-arms of Giangarzia d’Imola of the Mellini family, although the geometric pattern across the center of the top is slightly different, the motifs on the outer borders, in particular the reclining females, the snake and grotesque mask are almost identical to the present table;

- one sold Sotheby’s London, 19 May 1995, lot 55 (£13,000), described as bearing the coat-of-arms of 'Princess Borghese of Rome', interestingly this example features related bold geometric lines across the centre with a curved trapezoid followed by a stylized quatrefoil shape;

- one sold Sotheby’s London, 7 July 2006, lot 116 (£31,200), with related reclining figures on the outer borders, and grotesque masks, and a similar fantastical creature flanked on each sides by a cornucopia at each extremity of the top’s central section;

All of these tables share the same quality in their design and meticulous craftsmanship and therefore form a stylistically coherent group. They are also a direct testament to the trade between the East and the West and the influence in Venice of Islamic designs once propagated via the city's port.