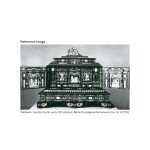 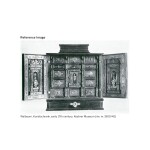 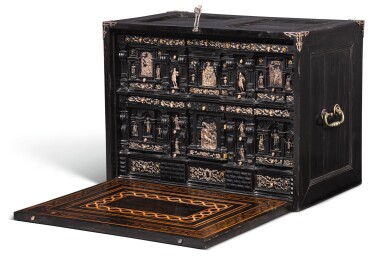 the interior of architectural design, with ash drawer liners

The condition report is currently not available. For further information, please contact Florence Flood at florence.flood@sothebys.com.

The style of this cabinet, typically made of ebony with silver mounts, was popularised by the silversmith Matthias Walbaum (active 1590-1632), who settled in the city of Augsburg before 1579. The goldsmiths' guild of Augsburg was highly reputed for its excellency and the lavish commissions by the wealthy court of the Dukes of Bavaria seem to have mostly gone to Augsburg masters, such as Walbaum.

Walbaum built up a highly successful business specializing in ebony cabinets, caskets, monstrances and frames, all mounted in silver. At least fifty pieces from his workshop have been identified. However, not all of his work was marked and it is difficult to distinguish it from that of his Augsburg contemporary, Boas Ulrich.

The extent of Walbaum's repertoire of impressive mounts made it possible to attribute this cabinet to the silversmith. Examples of his extravagant caskets can be seen in the British Museum (inv. no. WB.218) and the Grünes Gewölbe, Dresden (inv. no. I 38), although his most important work, is the exterior of the famous Pommersche Kunstschrank, a sumptuous art cabinet designed by Hainhofer for the Duke Philipp of Pomerania, which was mostly destroyed during World War II.

This present example displays Walbaum’s exceptional skills both in low relief and in modelling figures, further exemplified in his works illustrated in Löwe, op.cit., cat. no. 36 and cat.no. 54, which include similar floral and scrolling mounts, silver-gilt or merely in silver.