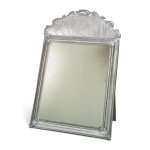 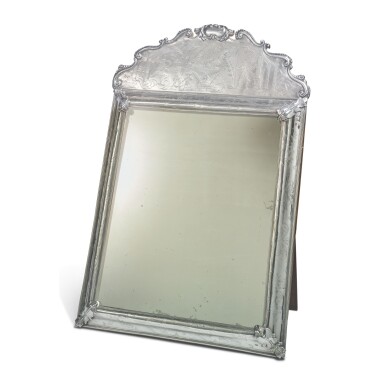 the rectangular frame flat-chased with exotic birds and plants and applied at the angles with stylized and beaded foliage, the detachable shaped cresting flat-chased with birds and elegant travelers and attendant flanked by architectural elements and centered by a fountain with the jets of water issuing from a sea monster and hare, all below a cartouche, wood backed and easel support

marked on each panel with date letter and lion passant, two panels also with leopard head, the cresting apparently unmarked

The lower right panels don't meet evenly at the angle. The rim of left panel dented slightly at lower angle. The mirror with some spots of discoloration. The mirror and wood backing loose, and the easel stand with one modern screw and lacking two other screws. Otherwise good condition.

Two mirrors with similar chinoiserie decoration, one maker’s mark only D in script, circa 1685 and another by Jacob Bodendick, London, 1680 were in the Jaime Ortiz-Patiño Collection of 17th Century English Chinoiserie Silver, sold Sotheby's New York, May 21, 1992, lots 154 and 155. The cresting of the 1685 example is also centered by a fountain; however, the jets of water issue from a trident held by a Triton seated on a dolphin.

Another example of chinoisierie decoration including a fountain is on a tankard attributed to Thomas Cooper, London, 1683 from the collection of Anne H. & Frederick Vogel III, sold Sotheby's New York, January 19, 2019, lot 897. The two-tiered fountain has dolphin supports, a female figure stem, and dragon spout. A baroque fountain also appears on the cup and cover probably by John Ruslen, 1680, in the Collection of the Worshipful Company of Goldsmiths illus. David M. Mitchell op. cit p. 392.