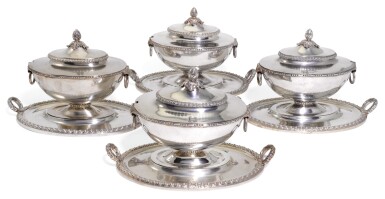 These sauce tureens were most likely additions to the famous Berkeley Castle Dinner Service ordered by James, 3rd Earl Berkeley, from the eminent French silversmith Jacques Roettiers in 1736. Inventories note a significant number of dinner plates, meat plates and identical sauce tureens, ordered from the silversmith Andrew Fogelberg between 1771-73.

The Berkeley Castle Dinner service is considered one of the most important and complete French dinners services of the 18th century. It was removed from Berkeley Castle and sold by order of The Trustees of the 8th Earl of Berkeley, Sotheby & Co, London, 16 June 1960, achieving a hammer price of £207,000. At the time this was the third highest price ever for a work of art at auction.