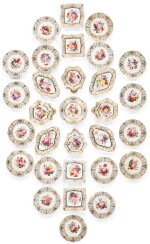 Overall of good appearance and quite complete. Three of the larger elements need some repair (see below for details).

Four square dishes (one is extensively rubbed to the gilding of the border, the others with light rubbing and stacking wear, no damages other than that)

Four shell dishes (one with notable rubbing to the gilt border, the remainder with light rubbing, no damages detected)

Four lobed oval dishes (light rubbing to gilt borders, two have iron red mars, one has a puce mark and one is unmarked)

Pair of ice pails (one ice pale cover and liner in good order but with minor flaking to the pink enamels, the other finial has been broken into three sections and is in need of restoration and there are no losses) light rubbing to gilding. One ice pail is slightly over fired so there is a bloom to the painting and slight crazing and staining.

Pair of fruit stands on moulded stems (the example with the detached stem has some minor chipping to the top of the stem, the bowl needs to be re-attached and some light rubbing to the gilding)

Four Comports (one where the plate and stem have become detached. The socket has been also been detached and broken in two. It retains its metal fitting. Collar requires restoration.

Sugar bowl finial has been broken and re-attached with a metal bolt, the sugar bowl itself is extensively stained with several stress cracks to the rim and body of the foot rim. The cover is slightly poor fit.