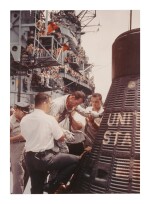 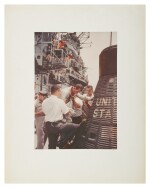 Vintage chromogenic print, image taken by Bill Taub, 9 3/8 by 13 1/4 inches, mounted on matboard; one or two chips to edge, some minor toning to image and mat.

Mercury-Atlas 9 marked the final crewed mission of the Mercury Program. The spacecraft⁠—named Faith 7⁠—was piloted by Gordon Cooper, and made 22 Earth orbits before splashing down in the pacific on 16 May 1963.